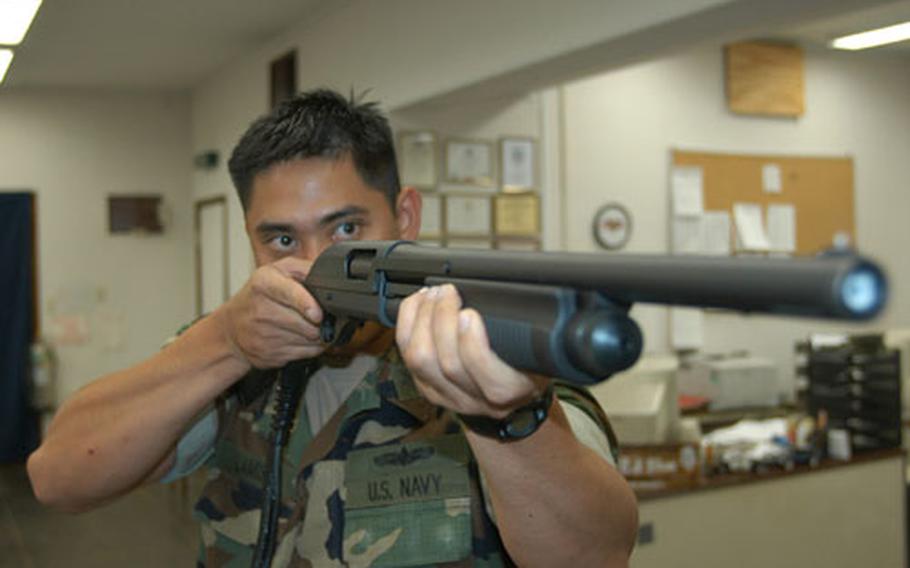 Petty Officer First Class Alexander Lamis, a Master-at-Arms at Naval Air Facility Atsugi, trains his modified shotgun on a suspect in a simulated scenario on a video screen as part of the Navy&#39;s Firearms Training Simulator, a new training device. (Juliana Gittler / S&S)

ATSUGI NAVAL AIR FACILITY, Japan &#8212; Petty Officer 1st Class Alexander Lamis, a master at arms, followed his partner into a house where a man was attacking his family.

Lamis and his partner pushed open a bedroom door and found the father beating his daughter. Lamis yelled a warning. Just as the man turned, Lamis shot twice, before the man could pull the trigger on a gun pointed at Lamis.

It was a breathtaking moment, even if most of the action occurred on a screen.

Using a new Navy training device installed last week, Wilson &#8212; also a master at arms and training lead petty officer for Naval Security Police at Atsugi &#8212; controlled the scenario on a computer to the side of the room where the simulated encounter involving Lamis took place.

FATS, or Firearms Training Systems, uses real weapons modified with laser devices. They feel and fire like ordinary weapons, but without the ammunition.

Navy masters at arms had trained with videotaped scenes and artificial weapons. FATS, said the master at arms, lets them train in an interactive, realistic scenario.

The program sharpens shooting skills and reaction times and develops better safety practices, the trainer said. The computer shows where a muzzle is pointed even if the shooter can&#8217;t see it. The computer also records whether a shot grazed a partner or bystander.

The program doesn&#8217;t count for sailors&#8217; weapons qualifications, he said, but it can help develop their skills so they need less ammunition and time on the range to qualify, which also can save money.

The Navy has used versions of FATS in its law enforcement training for years, Wilson said. But the laser-equipped system gradually has improved.

Last week, the Navy installed FATS at Atsugi, Yokosuka and Misawa naval installations. Sasebo Naval Base will get one next, Wilson said.

The Atsugi FATS program, however, is focused on realistic law enforcement, Wilson said. After running through a scenario, a sailor is graded on marksmanship, how he or she commanded a suspect and the outcome. The system offers trainers the ability to replay a scenario to show where shots landed. Trainers also can control ammunition, forcing sailors to reload on the fly.

The realism can humble a cocky trainee and show the recoil effects of different weapons, Wilson said: &#8220;This is better than PlayStation. It acts just like a regular weapon.&#8221;