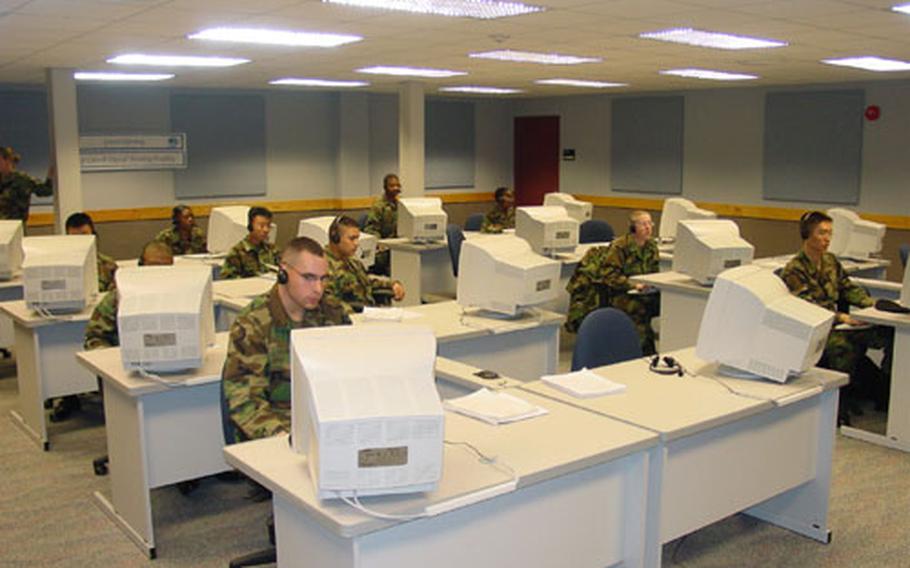 He took an Army Combat Life Saver course back when he was at Fort Hood, Texas, and he did it the old-fashioned, low-tech way. There were the usual reading materials, a classroom, and the &#8220;hands-on&#8221; where the troops actually practice battlefield first aid on their buddies.

But last week at Camp Carroll in Waegwan, South Korea, George got to take the same course at the post&#8217;s recently opened Digital Training Facility.

Two other installations in South Korea &#8212; Camp Henry in Taegu and Camp Humphreys near Pyongtaek &#8212; have DTFs; the Army plans to open others in August at Camp Casey and Camp Hovey. And now, units at Carroll also can harness state-of-the-art technology to train troops in required military subjects.

The newly built DTF is in Building 205, in the plaza across from the post office. Within its sky-blue walls are 16 computer workstations enabling soldiers to do course work on CD-ROM.

A video-teleconferencing hookup lets troops see and talk with an instructor who may be far away, including the United States. The DTF has a library of training CD-ROMs; soldiers&#8217; units supply others.

It&#8217;s a big hit with George, whose class last week at Camp Carroll was taught by an instructor at Camp Henry, about an hour&#8217;s drive to the southeast.

&#8220;If I had a question and I wanted to talk to the instructor at Camp Henry,&#8221; George said, &#8220;I could just push the cursor on my left, push the little button on the mouse, and the camera would zoom in on me and I could talk directly with the instructor &#8212; kind of like having an up-close-and-personal conversation, all through technology.

&#8220;Most of the instruction came from a book and they had not too many training aids. I was able to grasp the information a lot easier with it being on a computer.&#8221;

He describes himself as only moderately familiar with computer use, &#8220;but the program was so easy.&#8221;

The DTF saves Army units money they otherwise would have to spend sending soldiers to the United States for training. Also, &#8220;it will reduce the travel time to schools that would normally be located in other areas of the peninsula,&#8221; said Sgt. 1st Class Angelo Ridley, schools sergeant with the 307th Signal Battalion at Camp Carroll.

&#8220;You can see the instructor and the instructor can see you, but it saves you the hassle of going TDY overseas to get the instruction &#8230; you can do it right here at home. And it saves the Army a lot of money,&#8221; she said.