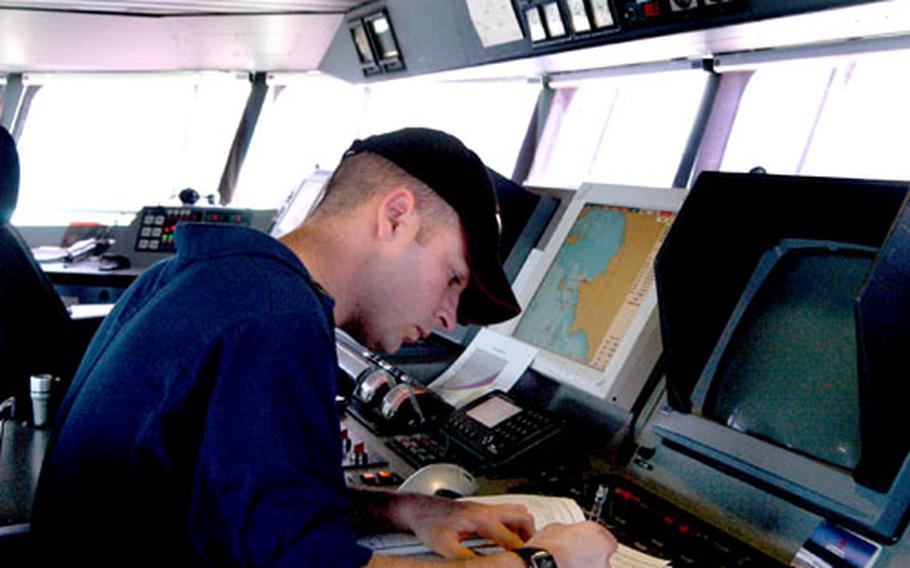 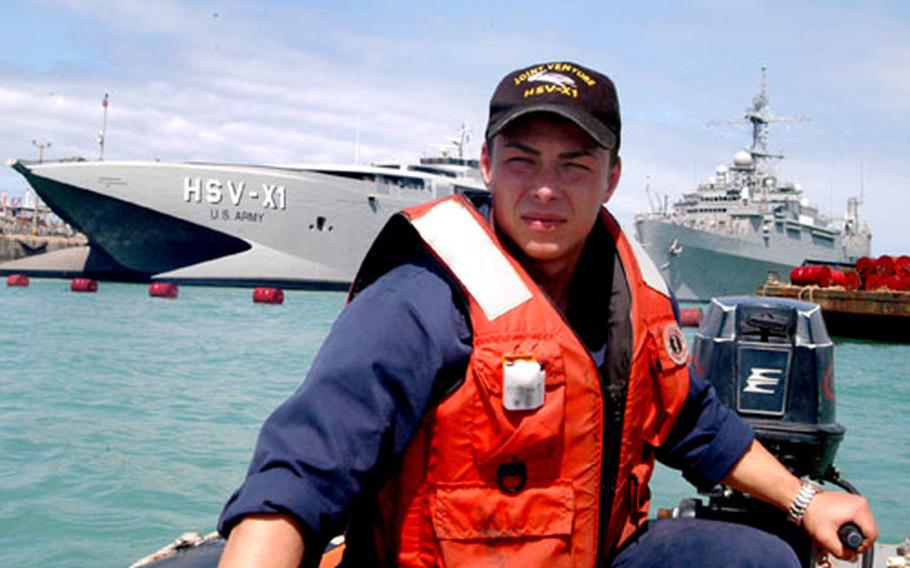 Sgt. Chris O&#39;Neal pilots an inflatable rescue boat in the harbor at Sattahip Naval Base, Thailand, while its mother ship, the U.S. Army&#39;s HSV Joint Venture, left, sits at its berth next to a Thai navy vessel. (Seth Robson / S&S)

SATTAHIP NAVAL BASE, Thailand &#8212; A battalion of Army high-speed transport ships could be based in Asia or other regions, allowing the U.S. military to respond quickly when conflicts flare up, said the commander of a High Speed Vessel in Thailand as part of the Cobra Gold exercise.

The U.S. Army&#8217;s Joint Venture HSV-X1 is berthed at Sattahip Naval Base after an 8,000-mile journey bringing equipment for U.S. forces participating in Cobra Gold from its base at Pearl Harbor, Hawaii.

Chief Warrant Officer Charles West, the Joint Venture commander, said his crew is preparing to transport 190 Marines back to their base at Okinawa on Friday. The 1,200- mile trip is the sort of mission the HSV and several newer sister ships, dubbed THVs [theater support vessels], are designed for.

The U.S. military is considering procuring 12 of the vessels, he said: &#8220;Three battalions, each comprised of four vessels. One vessel in each battalion would have a flight deck and you could carry 800 to 900 soldiers per vessel.&#8221;

The high-speed transport battalions would be spread around the world, with one possibly based in Asia, so the U.S. military could move troops and equipment quickly to areas of conflict, he said.

&#8220;If you are in Southeast Asia and you need to take something to Malaysia or Indonesia, that is what we are designed for,&#8221; West said.

The Joint Venture is able to move 15 Strykers (armored personnel carriers) or Bradley Fighting Vehicles and their crews, he said.

&#8220;You can carry the gear and the people. The crews can work on the vehicles in transit. Usually on a sea-lift, you would only carry the equipment and the crews would come by aircraft,&#8221; he said.

The HSV, which has cranes able to lift small boats into its hold and a flight deck for helicopters, also could be used as a mother ship for special forces, West said.

The Joint Venture is a 313-foot, wave-piercing catamaran with a top speed of more than 42 mph, he added. The only similar vessels are hydrofoils, which are too expensive and require too much maintenance for military use.

The first goal for the Joint Venture during Cobra Gold was to demonstrate an ability to deploy cargo quickly, he said. Reaching Thailand from Hawaii, carrying 51 pieces of cargo, took eight days &#8212; compared with the two weeks a conventional transport would have required.

The only way to move the cargo faster would be by air, which is expensive and requires large numbers of aircraft, West said.

The journey from Hawaii is farther than the distances HSVs normally travel. &#8220;We have to stay within 450 nautical miles of safe haven. We had to draw a route linking 450-mile circles around the Pacific Islands,&#8221; West said. On the way, the Joint Venture encountered water spouts off the coast of Vietnam but was able to alter course and outrun them.

&#8220;With your speed, you can avoid most storms. If we find something is ahead or close by, we can speed up or change course. On a conventional ship that does 10 to 12 knots, that is not going to happen. You are just going to have to ride the storm out,&#8221; West said.

The second part of Joint Venture&#8217;s Cobra Gold mission will be to haul the Marines back to Okinawa, West said &#8212; adding that it&#8217;s not always the most passenger-friendly vessel.

&#8220;It is real rough riding. When you carry the Marines, it is normally hard to get to the toilet because they are laying down trying to empty their sick bags,&#8221; he joked.

Other Army personnel often are surprised when they learn the Joint Venture is crewed by soldiers instead of sailors, he said. The vessel got its name because its crews rotate between the Army and the Navy, Turner said.

Another HSV, the Marine Corps vessel Westpac Express, also is in Thailand for Cobra Gold and will travel to Okinawa later this week, officials said.

Turner said the vessels will not race each other to Okinawa.