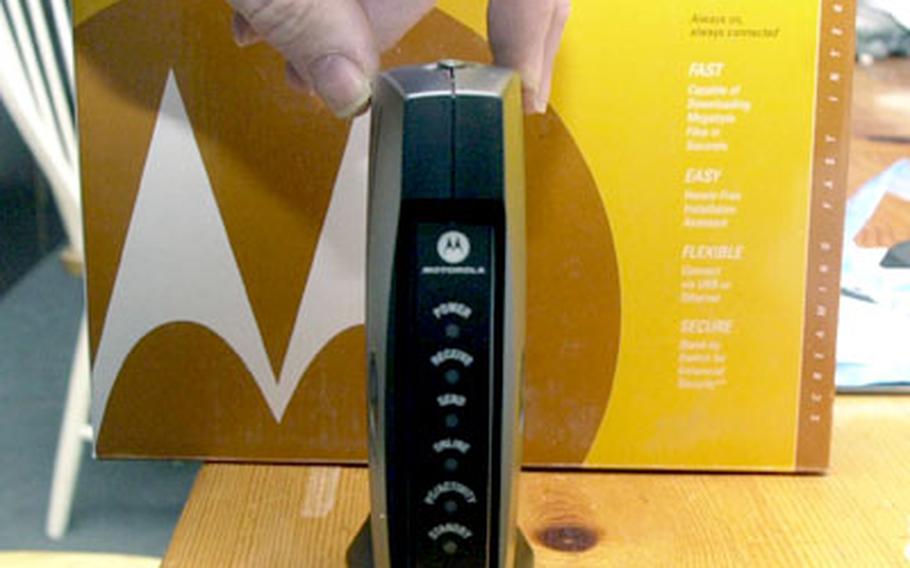 Once customers sign up for the broadband cable Internet connectivity offered at Sasebo Naval Base, a technician visits the resident&#39;s home and connects the television cable to a small external cable modem like the one shown here. (Greg Tyler / S&S)

SASEBO NAVAL BASE, Japan &#8212; Until recently, high-speed Internet access here used to lag behind that available at other U.S. bases in Japan. But now customers can choose among three separate options, each selling a different connection technology.

High-speed Internet connections still aren&#8217;t available to every base resident. But &#8220;as of today we now have the broadband cable available to all residents in main base housing,&#8221; John McCorts, Americable system manager, said Tuesday. &#8220;At first it was just in a portion of that area. &#8230; It&#8217;s also available now in the units in the bachelor enlisted and bachelor officer housing facilities.&#8221;

Also, the United Service Organizations&#8217; USONet offers Asymmetric Digital Subscriber Line (ADSL) connections but only at the Hario Housing Village. And the JENS Corporation offers its J-Spot wireless connection on a temporary rental basis, usable only on the main base at the Bayside Food Court.

Not one of the new high-speed options is available yet to all base residents, although Americable plans to achieve that &#8220;in a month, barring any unforeseen circumstances,&#8221; McCorts said. &#8220;We are working very hard right now to meet our next goal, which is to have the cable broadband available in Hario.&#8221;

JENS and USONet continue to offer their dial-up modem services basewide. Theoretically, dial-up connections could be at speeds up to 56 kbps, although most actual speeds are slower.

Broadband connections are at least twice as fast. Americable, for instance, offers three levels of cable broadband: 128 and 256 kbps per second and 1 mbps.

An ADSL connection is always on and uses the same line as a telephone. Its key advantage over a dial-up modem is speed. ADSL is from several to dozens of times faster than a dial-up modem connection, broadband officials have said.

A USONet official said Tuesday that the ADSL connections in Hario are quick, operating at 1.5 mbps. That means a complex Web page, which could take up to a minute to upload or download at 56 kbps, can appear in just seconds over ADSL.

The broadband cable and ADSL connections require modems different from those typically shipped in desktop and laptop computers. Americable and USONet both provide the equipment.

The USO is studying possibly offering wireless service at the organization&#8217;s recently remodeled Nimitz Park facility &#8220;so people could bring their laptops and use them in our comfortable location,&#8221; Stanhope said.

Wireless connections such as the J-Spot can operate from 2 mbps to 54 mbps depending on factors including the wireless standard in use, the company said. The food court connection operates at 11 mbps, it said; the rate fluctuates based on variables such as the number of connected users.

However, to use J-Spot in Sasebo, users must bring their own laptops to the food court. The service is slated to expand to the McDonald&#8217;s and BEH on main base, according to the JENS Web site.

Americable:Broadband cable modem service is available now in Sasebo&#8217;s Main Base Housing, bachelor enlisted housing and bachelor officer housing, and is to be available in Hario in one month. The cost to Americable television cable subscribers per month is $38.20 for a 128 kbps connection, $44.10 for a 256 kbps connection and $47.40 for 1 mbps service. These prices are in addition to monthly cable television charges, which vary depending on the level of service chosen. For non-cable television subscribers, or those who subscribe only to the free AFN channels, high-speed Internet connection costs are $44.95, $51.95 and $55.75, depending on connection speed chosen.

USONet:ADSL service is available only at the Hario Housing Village. The cost is $48 per month for service at 1.5 mbps. The normal set-up fee of $80 is waived through February.

AT&T JENS Corporation:J-Spot wireless service is for laptops brought by users to the Bayside Food Court. The company says the food court connection operates at 11 mbps but can fluctuate. The cost is $10 for three days, $20 for seven days and $50 for 30 days. The local AT&T JENS office will provide PCMCIA network cards to put into laptops to serve as the wireless version of a modem.

USONet:Dial-up service is $30 per month.