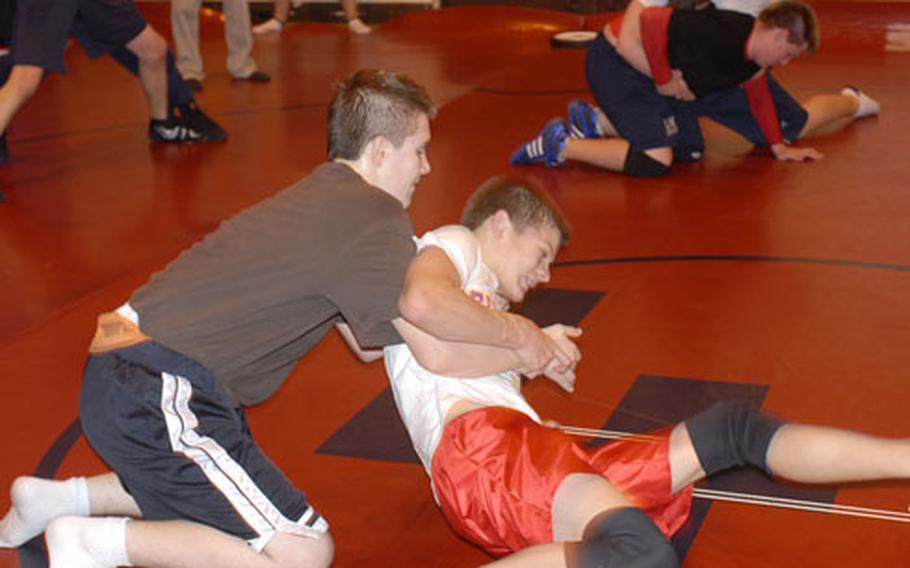 Lakenheath senior Kameron Terry squares off against assistant coach Josh Mantias. Terry expects to compete at 285 pounds in his first year with the Lancers. (Photos by Mark Abramson/S&S)

Lakenheath senior Kameron Terry squares off against assistant coach Josh Mantias. Terry expects to compete at 285 pounds in his first year with the Lancers. (Photos by Mark Abramson/S&S) 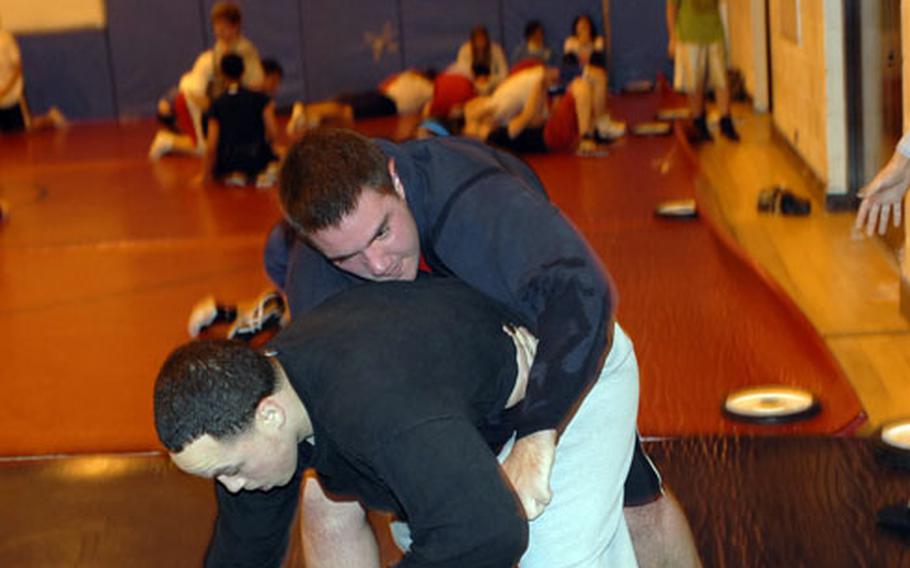 Lakenheath sophomores Brandon Searle (in red trunks) and Daniel Carroll square off at practice. Searle is one of the Lancers’ veteran wrestlers whom coach Darryl Brock has high hopes for this season. ()

The Division IV European DODDS wrestling champions of Alconbury High School are counting on a mix of youth and experience to propel them to another title, while Lakenheath is also looking forward to an excellent year on the mats.

At Menwith Hill, however, coach Pat Brew is already looking to next year. A lack of interest in the sport there means he can&#8217;t field a team this season.

The defending D-IV champion Alconbury Dragons have seven returnees on their varsity and junior varsity squadrons. Three seniors are among them.

"It is a mixture of really young and veterans," Ballard said. "We got a shot. We are going to be competitive."

The team to worry about in D-IV is, as always, Brussels, Ballard said.

Alconbury is led by senior Jaime Samudio, who is entering his fourth year on the team and is expected to compete in the 160-pound weight class.

"I think that our chances are pretty good this year. We lost a couple of key players last year," Samudio said. "We just have to work hard."

Samudio said the first meet at Lakenheath on Dec. 6 would be a good gauge of the team since they will be battling Lakenheath, a Division I school.

The Lancers have lofty goals this year. Coach Darryl Brock said he wants to qualify wrestlers for the European championships in at least 12 of the 14 weight classes. His team is still in tryouts, but he is projecting that there will be 43 wrestlers on the squad.

"I think we have a good idea of who is going on the team. We don&#8217;t know who is going to be the standout," Brock said. "Most are beginning freshmen and sophomores.

"Last year, Ramstein and us had the most kids qualify and that helps accumulate points."

Brock said the Lancers, who finished third in the D-I championships, need more wrestlers in the middleweight 152- to 171-pound classes on this year&#8217;s squad.

The Lancers&#8217; youthful experience includes returning sophomores Jon Reese, who could move up from the 103-pound class to 112 pounds, and Brandon Searle and Zach Castillo, who both wrestled at 119.

Brock is also expecting big things out of newcomer Kameron Terry, a senior whose family comes from Misawa Air Base, Japan. He plans to compete at 285 pounds.

"I think there are a lot of dedicated people [on the team]," Terry said.

Brew looks to jump-start the Menwith Hill program for next year by turning to the middle-school ranks to recruit. Five students are needed for a team, and the school has only about 36 boys total, Brew said.

"I had nobody coming back, so I beat the bushes to try to get the kids to come out. Hopefully next year the program will be back."