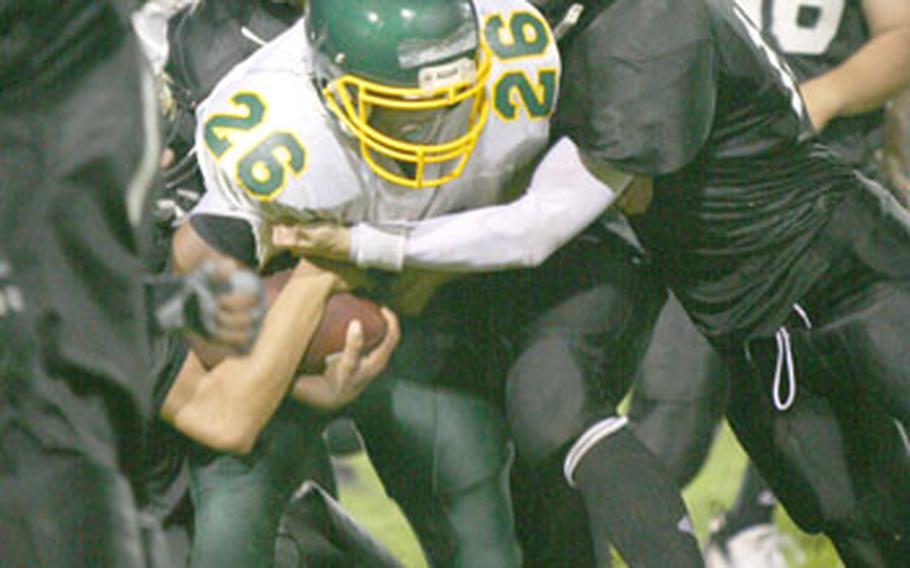 Edgren running back Johnell Alexander, center, is wrestled down by Zama defenders during Friday’s opener at Camp Zama, Japan. Alexander scored four touchdowns in the Eagles’ 32-13 victory. (Krystle Weirick/Special to Stars and Stripes)

Johnell Alexander, the hero of Edgren&#8217;s victory in the Class A title game last November, scored four touchdowns, including an 80-yard kick return, as the Eagles won their opener for the second straight year, beating Zama American 32-13 at Trojans Field.

Edgren 32, Zama 13: At Camp Zama, Japan, Alexander rambled for 150 yards on 23 carries, scoring touchdowns on runs of 50, 25 and 5 yards. The senior, who also plays cornerback, credited fullbacks Jamal Dennis and Cheston Nurial-Dacalio and the offensive line for his success.

"It begins with the offensive line," Alexander said. "They&#8217;re the most important part. Without them, we can&#8217;t pass or hand off the ball. The line was amazing. The fullbacks were incredible."

The opportunistic Eagles&#8217; defense forced five turnovers. Travis Holder led that effort with a fumble recovery and an interception.

Though victorious, coach Chris Waite believes his Eagles can improve on their execution.

The host Trojans got two touchdown passes from Emmanuel Sloan, 30 yards to Zach Woods and 18 yards to D.J. Williams.

"They dominated the line of scrimmage," coach Steven Merrell said.

Yokota 35, Kinnick 0: Despite the relative ease of the victory at Yokosuka Naval Base, Japan, Panthers coach Tim Pujol thought his team could iron out a few more wrinkles, especially on offense.

"We had too many penalties and missed assignments," Pujol said. "It always takes longer for offenses to come around."

Defense and special teams set up most of Yokota&#8217;s scores. In addition to Silva&#8217;s punt blocks, the Panthers intercepted three passes and recorded two sacks.

"The defense played well. We worked hard on passing. (Kinnick quarterback) Jon (Bollinger) is a good quarterback with quality people to throw to."

Bollinger completed two of six passes, both to Seth Bell for 64 yards. But the Red Devils could penetrate only as deep as Yokota&#8217;s 11-yard line late in the first quarter.

"They (Yokota) took advantage of our weaknesses. Tim is a good coach. He played a good game. I expected him to," said Kinnick coach Tom Bell.