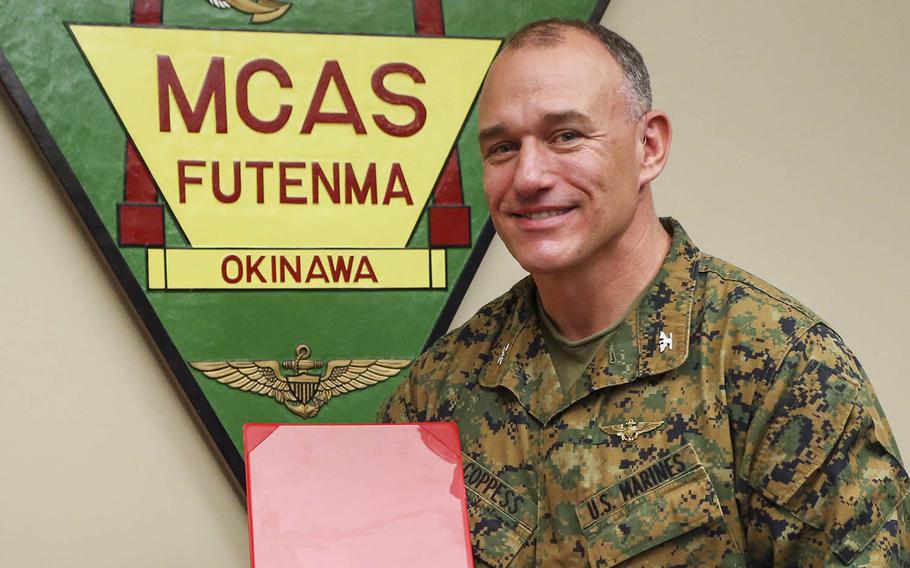 Col. Mark Coppess was relieved of command at Marine Corps Air Station Futenma, Okinawa, on June 5, 2018, due to a loss of trust and confidence in his ability to lead his command. (Nicole Rogge/U.S. Marine Corps photo)

Col. Mark Coppess was relieved of command at Marine Corps Air Station Futenma, Okinawa, on June 5, 2018, due to a loss of trust and confidence in his ability to lead his command. (Nicole Rogge/U.S. Marine Corps photo) 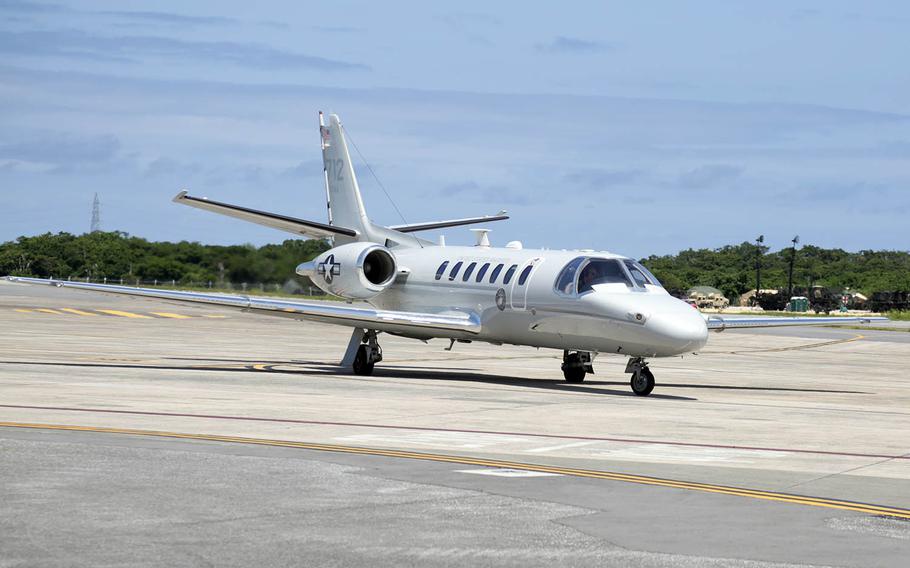 The former commander of Marine Corps Air Station Futenma was a “high-risk aviator” who pulled rank to get more time in the cockpit, according to a Marine Corps command investigation.

Col. Mark Coppess was fired from his job at the Okinawa air station on June 5 by Marine Corps Installations Pacific chief Brig. Gen. Paul Rock due to “loss of trust and confidence in his ability to lead his command.”

The investigation — detailed in a May 22 report — was launched the previous spring following a complaint about “bullying, abuse of authority to further a personal agenda and a generally poor command climate” at the home of the 1st Marine Aircraft Wing.

It found that Coppess had “abused his authority via inappropriate command pressure regarding his personal flight hours and flight qualification/designation objectives, to the detriment of his command’s climate.”

Aviators at the air station reported problems ranging from undue command influence to safety concerns related to command pressure and threats of retaliation.

Coppess had “abused the staff and officers of MCAS Futenma for months so he could achieve his personal objectives to fly,” the document said.

The issues arose as Coppess — an AH-1W SuperCobra attack helicopter pilot — attempted to transition to the UC-35 Cessna Citation passenger and cargo plane, according to the report. During his time at Futenma, he logged 284 flight hours in the UC-35 over 10 months — more than any other air station commander in the Marine Corps during that period.

Coppess also directed that he be allocated three flights a week and had other pilots bumped from schedules to make room for himself, according to the document.

Flight instructors had designated Coppess as a “high-risk aviator” who struggled to advance his proficiency to command the aircraft, the report said.

A pilot whose name was redacted from the document recalled taking control of an aircraft from Coppess multiple times to prevent mishaps or flight violations, and described him to investigators as making poor decisions and being slow to recognize dangerous situations.

Coppess ignored an emergency command to descend during a flight over Osan Air Base, South Korea, the pilot said.

“We never saw another aircraft but someone could have been flying … across Osan’s active runway and we would have crashed into them,” the pilot said in response to an investigator’s question.

Other servicemembers — whose names were also redacted from the report — told investigators they thought their commander wanted a fixed-wing qualification in preparation for a civilian career. One said he wasn’t convinced Coppess had the potential to command the aircraft.

“I would not put my family on a Space A flight with Col. Coppess as an aircraft commander,” the servicemember said, according to the report.

An aviator described an incident in which Coppess raised “his flaps at a non-standard time and another where he warmed a burrito on the exhaust duct of the aircraft.”

Another told investigators the former Futenma commander constantly stated that there was “no rank in the cockpit,” but that his actions said otherwise and that most pilots didn’t like flying with him.

The report said Coppess’ flight hours alone show that he was applying pressure to the flight-scheduling process at Futenma. It describes him as “introverted, deliberate, subdued, somewhat intimidating, and struggling as a copilot.”

It also notes that the problems at Futenma were limited to UC-35 operations and didn’t impact the rest of the installation.

Most of the report’s recommendations were redacted from the version that was released; however, the author wrote:

“When Col. Coppess leaned what the other UC-35 pilots thought of him and their perceptions of him, he was stunned … When Col. Coppess was exposed to his missteps, he was approachable, listened receptively and expressed sincere gratitude.”

The Marine Corps said in a statement Monday that Coppess had been reassigned and retains his rank, but didn’t provide further details.