High-level talks between US and North Korea are postponed 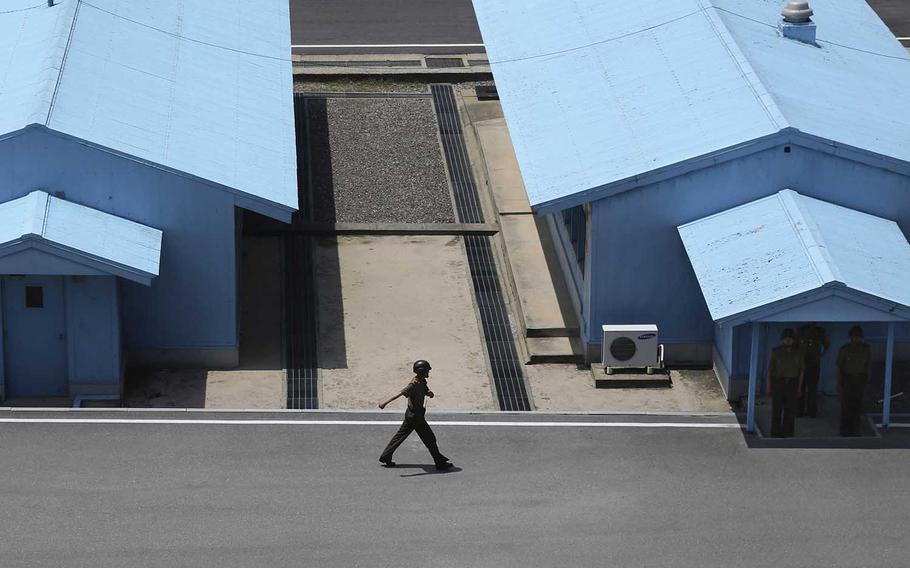 A North Korean soldier marches at the truce village at the Demilitarized Zone, which separates the two Koreas in Panmunjom, North Korea, Wednesday, June 20, 2018. (Dita Alangkara/AP)

SEOUL, South Korea — A planned meeting between Secretary of State Mike Pompeo and a senior North Korean envoy was postponed at the last minute, casting a new shadow over nuclear talks between the rival nations.

Pompeo had been due to meet with North Korean official Kim Yong Chol Thursday in New York in a bid to jump start efforts to reach agreement on how to implement a promise to denuclearize the Korean Peninsula.

The State Department did not give an explanation but said in a brief statement that the meeting “will now take place at a later date.”

The meeting had been widely seen as a precursor to an expected second summit between President Donald Trump and North Korean leader Kim Jong Un.

The two leaders agreed to work toward the “complete denuclearization of the Korean Peninsula” when they met for the first time on June 12 in Singapore. But progress in ironing out the details has been slow and both sides have shown signs of toughening their stances.

“The United States remains focused on fulfilling the commitments agreed to by President Trump and Chairman Kim at the Singapore summit in June,” Nauert said in Wednesday’s statement.

The State Department previously announced that the meeting agenda would be focused on making progress on the four points of the Singapore summit agreement, including “achieving the final, fully verified denuclearization” of North Korea.

The North raised concern over the weekend when it warned via state-run media that it may resume nuclear development if the U.S. doesn’t lift punishing economic sanctions against it.

Pompeo insists the administration will maintain pressure on the North Korean regime until it sees concrete measures to dismantle its nuclear weapons program.

The North wants payback after it suspended its nuclear weapons testing program and purportedly destroyed its main nuclear test site. It also has returned the remains of U.S. troops killed in the 1950-53 Korean War.

The communist state also promised to dismantle its main nuclear facility at Yongbyon if the U.S. “takes corresponding measures.”

But experts say those moves are reversible and many are skeptical that the North would give up its nuclear weapons after demonstrating major advances before joining the diplomatic process earlier this year.

Pompeo met with Kim Yong Chol, who is widely considered the North Korean leader’s right-hand man, in New York in May ahead of the Singapore summit.

But previous rounds of talks, and a planned visit by Pompeo to Pyongyang in August, have been canceled as negotiations hit an impasse over the past several months.

South Korea’s presidential office said it had received advance notice about the postponement of Thursday’s meeting and tried to play down the impact on the overall process.

“I don’t think … dialogue has lost steam,” presidential spokesman Kim Eui-kyeom was quoted as saying by the Yonhap News Agency.