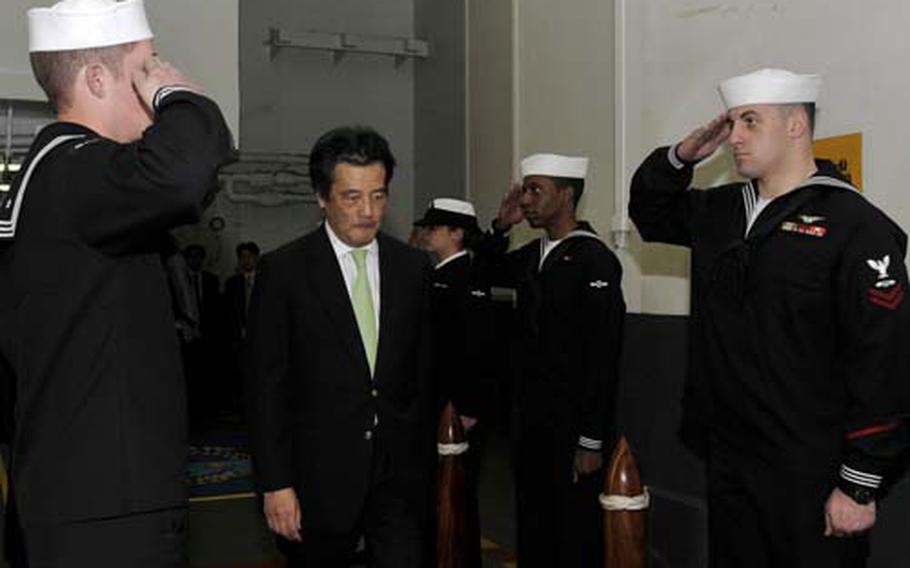 Japanese Foreign Minister Katsuya Okada is greeted by U.S. sailors during a visit Saturday to the aircraft carrier USS George Washington at Yokosuka Naval Base, Japan. (Phillip Pavlovich/Courtesy of the U.S. Navy)

&#8220;It is at a level where I&#8217;m communicating with the ambassador. We will be for a while,&#8221; Okada told reporters after he toured the aircraft carrier USS George Washington at Yokosuka.

Prime Minister Yukio Hatoyama and Japan&#8217;s new government, which took power in September, have promised to review the 2006 U.S.-Japan bilateral agreement that called for shifting the Marine Corps air assets to the more rural site of Camp Schwab on Okinawa&#8217;s Henoko Peninsula. An end-of-May deadline was set for negotiating and finalizing an agreement with the U.S. on a new plan.

Okada said he met with Roos on Friday, but he declined to go into detail; however, he emphasized that the deadline set for the end of May still holds.

Before touring the naval base and the George Washington, Okada visited Yokosuka city Mayor Yuto Yoshida. Okada said he met with the mayor to talk about a Foreign Ministry committee that looked into a secret 1960s-era agreement between the U.S. and Japan that allowed U.S. military aircraft and warships carrying nuclear weapons to enter Japanese ports without prior consent.

Okada told reporters after the meeting that he apologized to the mayor because the government had not acknowledged the secret agreement until recently. He said nuclear arms issues are extremely sensitive in Japan, where the development and possession of nuclear weapons are banned and where entry into its ports with nuclear armaments is not allowed.

Okada said no nuclear weapons will be allowed into Yokosuka Naval Base, pointing out that his statement follows the U.S. announcement last week that it will retire its sea-based nuclear Tomahawk missiles.