Hessen stores get the OK to stay open 24 hours a day, 6 days a week 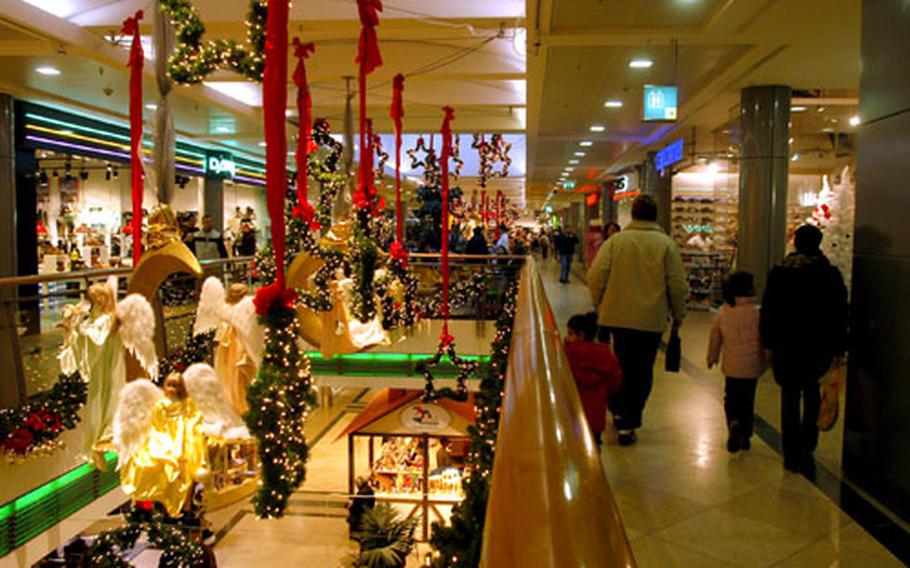 Shoppers will have a few more hours to find those perfect Christmas presents as places such as the Luisencenter in downtown Darmstadt. Under new German laws, shops are now allowed to stay open 24 hours a day, Monday through Saturday. Many stories, such as the Luisencenter&#39;s anchor store, the Karstadt, plan to stay open until 10 p.m.on Thursdays, which is three hours longer than normal. (Matt Millham / S&S)

HEIDELBERG, Germany &#8212; If you&#8217;re an American in Frankfurt, your shopping opportunities, if not your buying power, have just increased dramatically.

New extended shopping hours just enacted by the Hessen state government are up against two realities: a 20-month low in the U.S. dollar, and, more impressively, the long-standing traditions of German retailers and workers.

Hessen shops are now allowed to stay open 24 hours a day, six days a week. Sundays are still a day of rest, except for four days each year, six hours a day.

No Hessen stores contacted this week said they&#8217;d be open for 24 hours, and determining which stores are extending their hours could take some diligence. One large retailer, Karstadt, said some of its stores would be open until 10 p.m. But those evenings varied from location to location.

In Wiesbaden and Hanau, no immediate changes were planned to the long-standing hours of 9:15 a.m. to 8 p.m., but that was subject to change, officials said.

The change in Hessen&#8217;s shop hours are among similar actions taken throughout most of Germany after a federal court decided that German states and not its federal government should decide when stores may be open. Germany had for half a century instituted the most restrictive shopping hours in Europe.

In Rhineland-Pfalz &#8212; which includes Kaiserslautern and Baumholder &#8212; hours were legally extended to 10 p.m. on Monday through Saturday and eight days were designated as legal for 24-hour shopping. But shopkeepers were still talking about plans.

Germany&#8217;s rules regarding shopping hours date to 1956 and, despite numerous challenges, have endured with only slight changes.

In Bavaria, the most conservative and Roman Catholic state and home of Schweinfurt, Bamberg, W&#252;rzburg, Garmisch and Grafenw&#246;hr, no change is planned. The most liberal shopping hours, in fact as well as law, are expected to be in Germany&#8217;s most urbane, unchurched city: Berlin.

Moni Koch contributed to this story.

Monday through Saturday until 10 p.m.

Thursday through Saturday until 10 p.m.

Friday and Saturday until 10 p.m.