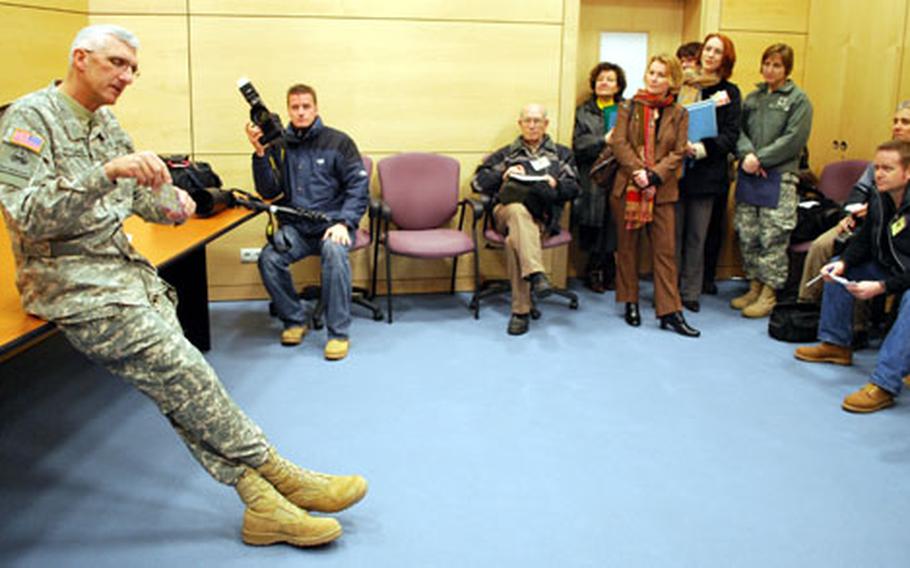 Maj. Gen. Mark P. Hertling shows reporters a flier for a candidate for governor of one of Iraq&#39;s northern provinces. It was one of the souvenirs from his 15 months in Iraq that he says shows the progress that was made. (Matt Millham / S&S)

Maj. Gen. Mark P. Hertling shows reporters a flier for a candidate for governor of one of Iraq&#39;s northern provinces. It was one of the souvenirs from his 15 months in Iraq that he says shows the progress that was made. (Matt Millham / S&S) 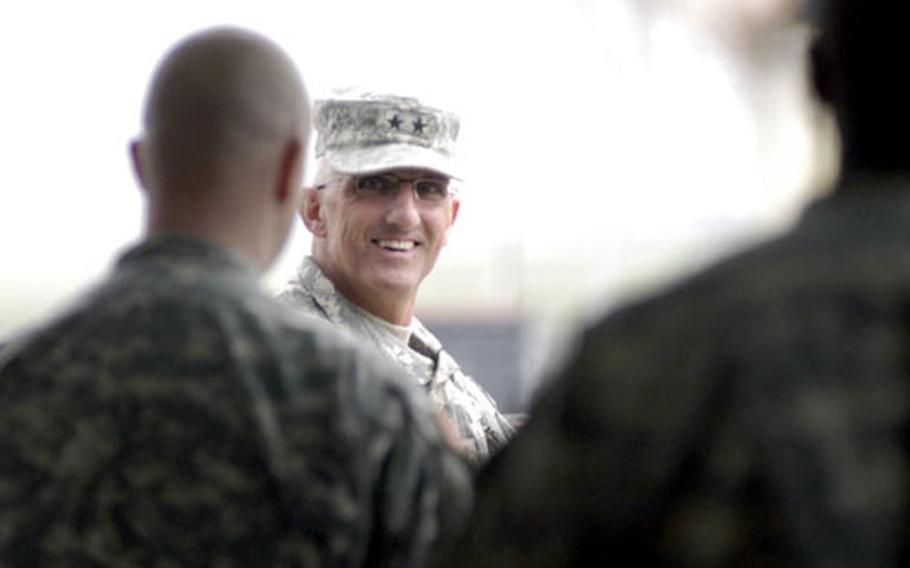 Maj. Gen. Mark P. Hertling waits outside a Wiesbaden gym along with 27 other soldiers who returned with him Wednesday from Iraq. The soldiers were in Iraq for 15 months. (Matt Millham / S&S)

WIESBADEN, Germany &#8212; Fresh off the plane from Iraq, Maj. Gen. Mark P. Hertling, the 1st Armored Division commander, reached into his pocket and pulled out a souvenir to show reporters.

It was a card, roughly the size of doctor&#8217;s note, with a calendar on one side and, on the other, a picture of the acting governor of Iraq&#8217;s Salah ad Din province.

Westerners, he admitted, might not find it all that exciting, but the card is a symbol of what went right during his 15 months commanding coalition troops in a large swath of northern Iraq.

They are photos of the soldiers killed in action while serving under him, symbols of how hard it is and how much it costs to fix a broken country whose inhabitants differ over what fixed means.

The area he was responsible for &#8212; a swath roughly equal in area to the German states of Hessen, Baden-W&#252;rttemburg, Bavaria and Rhineland-Pfalz combined &#8212; doesn&#8217;t yet meet anybody&#8217;s definition of fixed. Nevertheless, he considers the deployment a success.

"We were able to accomplish everything we set out to accomplish," said Hertling, who deployed with roughly 1,100 soldiers from his division&#8217;s headquarters and commanded anywhere from 22,000 to 26,000 troops assigned to his command, Multi-National Division&#8211;North, during the deployment.

"I know that sounds strange, but it was almost, in some cases, staggering what we accomplished in terms of attack rates decreasing, jobs coming open and governments standing up," he said.

That doesn&#8217;t mean Iraq is ready to stand on its own. From Hertling&#8217;s description of the country he just left, Iraq appears to be plodding slowly toward some as-yet undecided state. And the scale of Iraq&#8217;s problems makes the current U.S. financial crisis look like salad days.

Iraq&#8217;s unemployment rate ranges from 40 percent to 80 percent depending on where you are in the country.

And the infrastructure that has survived is obsolete and crumbling.

The violence in northern Iraq has decreased sharply, from roughly 1,800 attacks per month a year ago to a little more than 100 attacks during his last full week in Iraq, trending toward 400 for the month.

The Iraqis are, however, "very eager, willing and almost able" to take over responsibility for their own security.

"In the governmental realm, and the infrastructure realm, they were willing," but often not able to do things for themselves, he said.

"They have lost many of their technocrats, many of their engineers have left the country," he said. "The infrastructure situation in Iraq is abysmal. It&#8217;s terrible in every single industry."

One harsh example is the oil refinery in the northern Iraq city of Beiji, which, despite operating with 1950s technology, turns out 13 million barrels of oil a month. But damage done nearly two decades ago in the Gulf War still hasn&#8217;t been repaired. The result, Hertling said, is an ecological disaster.

It&#8217;s up to the Iraqis to fix it, he said, and getting Iraq&#8217;s central government to help the northern provinces is no easy task.

First, the governors and officials running the provinces do so without an official mandate &#8212; elections haven&#8217;t yet happened.

There&#8217;s also little appetite in Iraq&#8217;s Shia-dominated central government to help the northern provinces, which are dominated by Kurds and Sunnis.

"It would be like having a central government in Bonn that didn&#8217;t care anything about what was going on in Wiesbaden or Frankfurt," Hertling said.

But, with violence down, average Iraqis seem to have a desire to move forward.

They have new concerns, and goals, to address.

Hertling said he was recently talking with a new member of the "Sons of Iraq," a home-grown group that has contributed significantly to limiting extremist violence.

The man admitted he had been a terrorist, but now he was going to the university and studying political science.

A year ago, rocket-propelled grenades and small arms fire greeted Hertling and his troops as they rode through Samarra, home of the al-Askari Mosque, a Shiite holy site badly damaged by bombings in 2006 and 2007.

"We went down there a few weeks ago, the mosque is being rebuilt, we walked the marketplace, talked to the citizens, had people come up to us offering tea and food," he said.