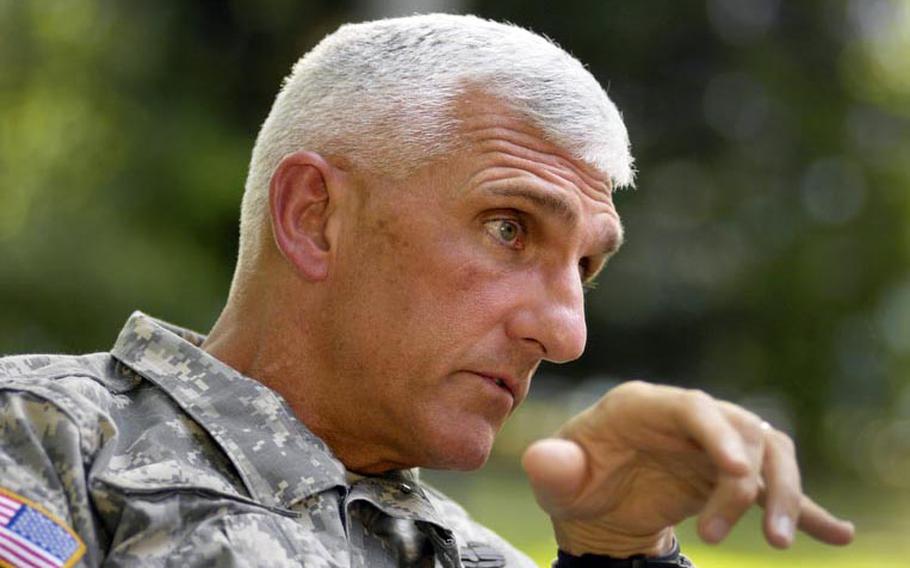 WASHINGTON &mdash; The Army could return a Europe-based Army brigade to the United States before the previously announced 2015 deadline, the head of U.S. Army Europe said Wednesday.

Lt. Gen. Mark Hertling, who took over the post in March, told reporters that he has already made his recommendation to Army officials about which brigade should be moved back to the United States, but would not identify the unit because no formal decision has been made.

But he did say the move could come sooner than Pentagon officials requested. He declined to say how much sooner.

In April, the DOD announced that only one Europe-based combat brigade would move stateside. An earlier plan called for two.

The command currently oversees three brigades in Germany &mdash; the 170th Infantry Brigade in Baumholder, the 172nd Infantry Brigade in Schweinfurt, and the 2nd Stryker Cavalry Regiment in Vilseck &mdash; as well as the 173rd Airborne Brigade, which has troops both in both Germany and Italy.

Hertling said he does not anticipate any changes in that part of the plan, even with increased political and budgetary pressure from Congress. Several lawmakers have publicly questioned whether stationing troops in Europe makes fiscal sense given the more pressing threats facing U.S. interests elsewhere in the world.

&ldquo;Those are just recommendations, and the department is looking at them now,&rdquo; he said.

Since 2004, the Defense Department has been shifting U.S. forces out of Europe as part of a post-Cold War drawdown. Hertling noted that about 20 years ago, more than 213,000 U.S. soldiers were stationed on the continent.

Today, Hertling oversees about 41,000 soldiers there, and roughly 11,000 of those are serving in the Middle East.

But he said the U.S. presence in Europe remains a vital resource for partnerships with foreign allies and strategic readiness. Hertling said he&rsquo;ll spend the next few days in Washington, talking about those missions with politicians to help quell discussions about more cuts to the nation&rsquo;s end strength in Europe.