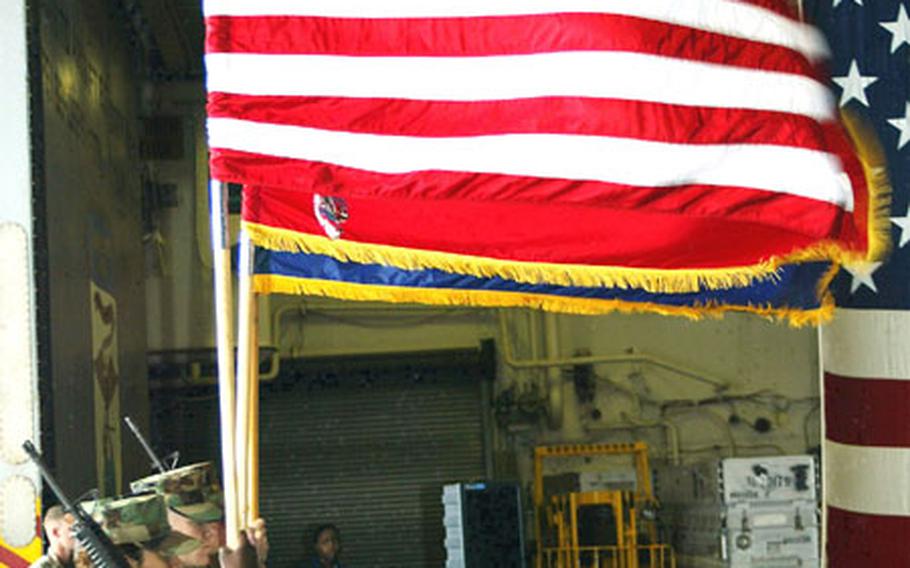 A color guard comprised of sailors and Marines from the 31st Marine Expeditionary Unit stands at attention during a ceremony to commemorate the 58th anniversary of the Battle of Iwo Jima. (Courtesy USS Essex)

Hundreds of sailors and Marines serving in Japan held a solemn ceremony last week in remembrance of the men who fought and died in the battle of Iwo Jima.

The 58th Anniversary Commemoration of the Battle of Iwo Jima ceremony, attended by the crew and Marines from 31st Marine Expeditionary Unit, was staged in the hangar bay of the massive amphibious assault ship USS Essex, according to an Amphibious Group ONE statement.

A distant backdrop, visible from the hangar bay, was Mount Suribachi, where servicemembers raised the American flag during the battle. &#8220;Seeing the American flag flying over the highest ground on the island boosted the Marines&#8217; morale, and the attack continued,&#8221; said Marine Capt. Charles Smith of the 31st MEU, Battalion Landing Team, the keynote speaker.

&#8220;Despite the horrific conditions that existed, it was the indomitable fighting spirit of our forefathers here on Iwo Jima that added to an already illustrious reputation as being the most feared combat team history has ever known.&#8221;

The Essex Amphibious Ready Group &#8212; the Essex, USS Fort McHenry, USS Harpers Ferry and USS Juneau &#8212; spent the week steaming off the small island&#8217;s coast about 700 miles east of the mainland. The hangar bay commemoration coincided with an island ceremony attended by veterans of the battle.

The ships were in the area after a combat deployment to the Philippines that the Pentagon announced last month but which was postponed after Manila officials said no other nation could conduct combat operations there without a specific treaty.

Iwo Jima was the site of World War II&#8217;s largest sustained aerial offensive in the Pacific. The United States also sent more than 110,000 Marines in 880 ships in what became the Pacific campaign&#8217;s largest invasion force.

Breaking through and bringing the island under U.S. control took 36 days of fighting and resulted in more than 25,000 American casualties.

During the reverent observance, 10 sailors and Marines passed the flag to each other while Chief Petty Officer Vick Smith read &#8220;Olde Glory.&#8221;

&#8220;These patriots fought for the same principles to which we commit ourselves today,&#8221; Capt. Ronald Evans, the Essex&#8217;s skipper, said. &#8220;It is our duty as American fighting men and women to honor them by encompassing in all that we do, the same courage and spirit of determination they exhibited 58 years ago.&#8221;