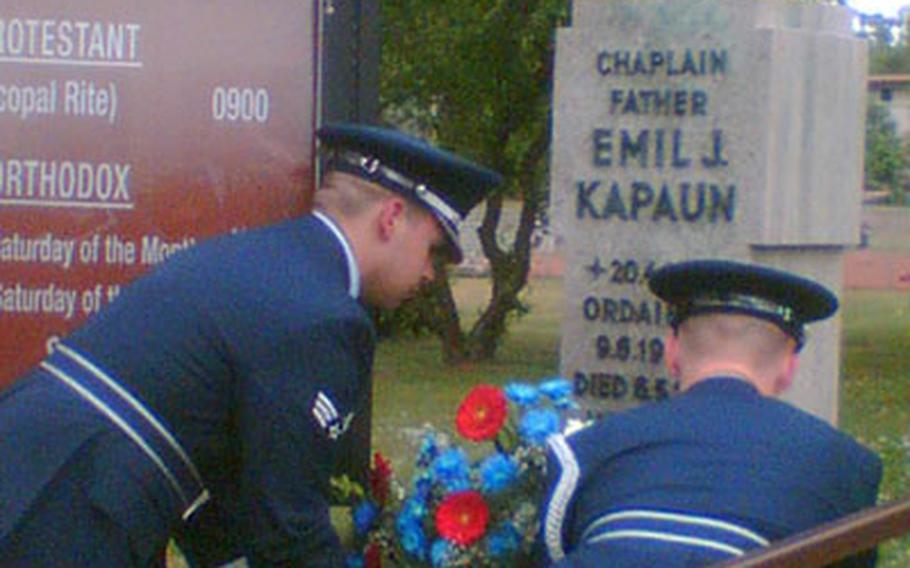 An Air Force Honor Guard lays a wreath at the foot of a monument honoring Chaplain (Capt.) Emil Kapaun at a military installation named after the Korean War hero in Kaiserslautern, Germany. (Scott Schonauer / S&S)

An Air Force Honor Guard lays a wreath at the foot of a monument honoring Chaplain (Capt.) Emil Kapaun at a military installation named after the Korean War hero in Kaiserslautern, Germany. (Scott Schonauer / S&S) 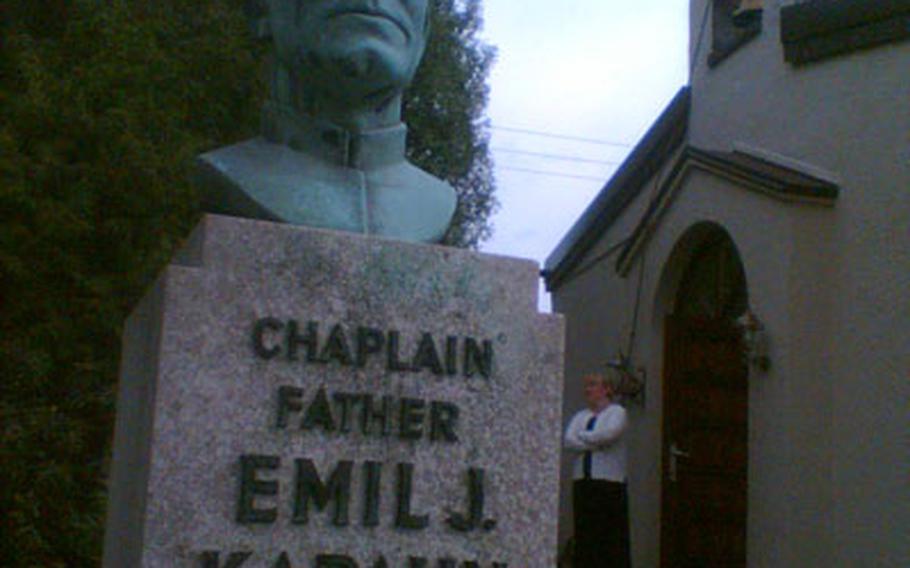 About 50 people gathered on Thursday to pay tribute to the legendary chaplain and cut the ribbon for a refurbished chapel annex. (Scott Schonauer / S&S)

Communist forces in the fall of 1950 had overrun the 1st Cavalry Division in northern Korea near the Chinese border, and American commanders ordered their forces to retreat. Kapaun, a Catholic priest with the 3rd Battalion, refused and stayed to care for the men who couldn&#8217;t flee.

When enemy forces captured Kapaun and dozens of other U.S. soldiers, story has it that he was administering the last rites to a dying soldier.

Although few people who live and work at the military base here named after him know the history, Kapaun is legendary among the generation of chaplains who follow him.

On Thursday, about 50 people held a memorial service to honor the Korean War hero, who died a prisoner of war 56 years ago this month.

&#8220;We are fortunate to be stationed on an installation named after him,&#8221; said Col. Earl Matthews, commander of the 435th Air Base Wing.

While in captivity, Kapaun risked his life to steal food from the surrounding fields and sneaked away to a nearby river to clean cotton bandages for the wounded held in a dirty and unsanitary prison camp.

Many veterans who have survived the camp credit Kapaun for helping them get through the ordeal. He is remembered for defying camp rules forbidding religious services. On Easter Sunday in 1951, he held Mass using broken wood to make a cross and barbed wire to form a rosary.

On May 25, Kapaun died while in captivity. The military posthumously awarded Kapaun the Distinguished Service Cross, but Korean veterans have requested that he receive the Medal of Honor. In 1993, the Vatican named him a &#8220;Servant of God.&#8221; Some Catholic war veterans are campaigning for Kapaun to become a saint.

Kapaun Air Station in Kaiserslautern is believed to be the only U.S. military installation named after him. The military base is home to the Defense Commissary Agency&#8217;s Europe regional office, Kisling Noncommissioned Officer Academy and the 38th Combat Support Wing.

On Thursday, an Honor Guard laid a wreath in front of a bust of Kapaun before attendees walked over to cut the ribbon in front of a new annex.