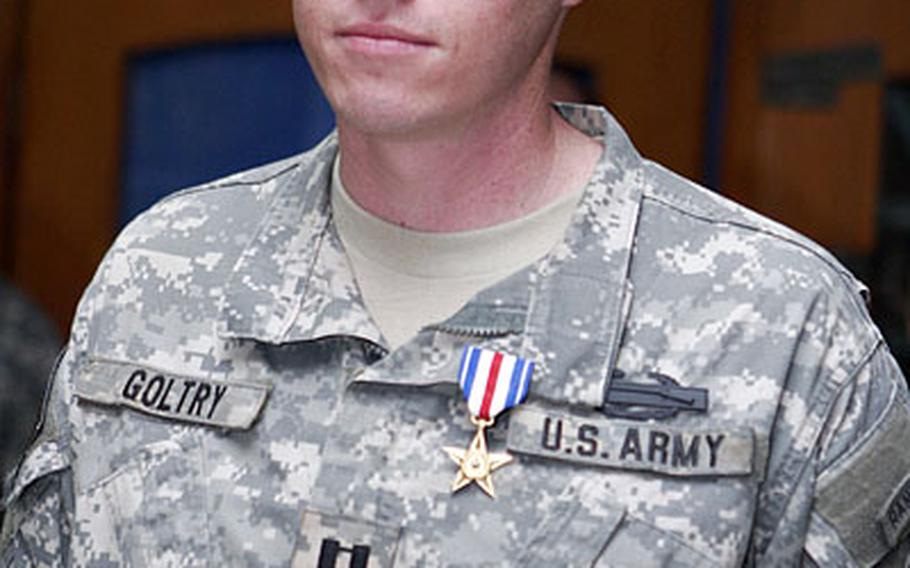 But, for the actions he took on one particular moonlit night in Samarra in February, Capt. Brennan Goltry has been marked as a hero. Goltry was awarded the Silver Star, two Purple Hearts and the Combat Infantryman Badge in a ceremony Tuesday at a small combat outpost in a city still very much in the middle of the fight.

According to accounts of the fight, which earned him the medal, Goltry, 27, was leading a five-Humvee patrol through Samarra on Feb. 2. Seeing there was a full moon, and knowing it would give insurgents better visibility than on a normal night, Goltry was not surprised when gunfire broke out.

The column had just turned down a street when insurgents using automatic weapons and sniper rifles opened up.

The first Humvee in the column had been disabled, so Goltry ordered his own driver to pull in front of the lead vehicle to provide cover. Goltry saw insurgents to his right, opened his door and opened fire. He was hit twice in the left leg, but kept firing.

&#8220;Goltry took cover and gathered his men; like him some of them were wounded. It is unknown how many attackers were involved, but Goltry led his men south on foot with suppressive fire and basically ran through the objective until the enemy was constrained,&#8221; the Army release reads.

Samarra has long been a troublesome spot for American troops in Iraq. In February 2006, a famed Shiite shrine in the city was bombed by insurgents, touching off the spiral of sectarian violence that has plagued Iraq. The same shrine was hit again earlier this year, and on Thursday, U.S. military officials announced that Iraqi and American troops had begun wide-ranging clearing operations in the city.

Goltry&#8217;s superiors say his actions on that February night were simply what they&#8217;d come to expect from the platoon leader.

At the awards ceremony on July 31 at Patrol Base Olson, Goltry was presented the medals by Maj. Gen. Benjamin Mixon, commander of the 25th Infantry Division and Multi-National Division &#8211; North. Golty is expected to be awarded a third Purple Heart for wounds he received in another engagement in May, officials said.