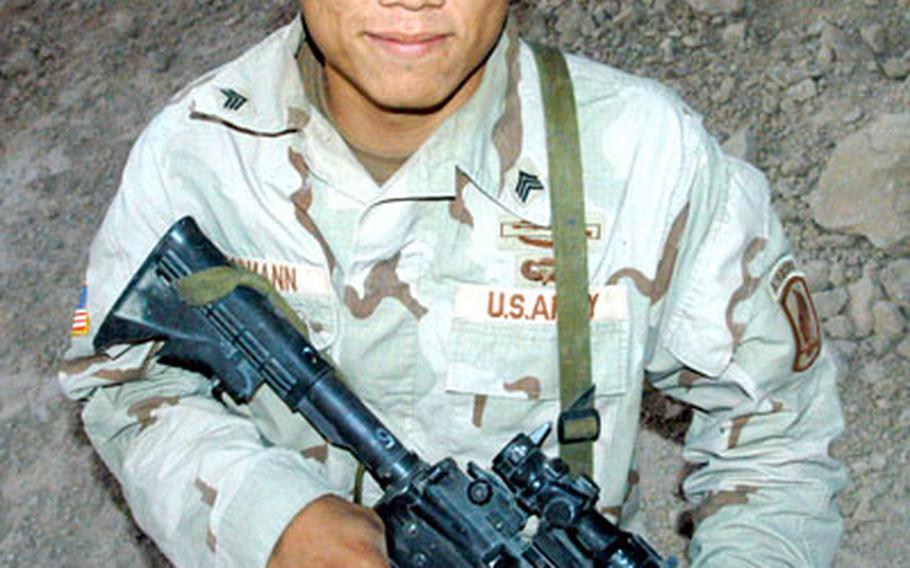 Sgt. Justin Hormann saved the life of another soldier and led a squad against difficult odds in Afghanistan. (Jason Chudy / S&S)

When interpreters with Company C, 2nd Battalion (Airborne), 503rd Infantry Regiment, reported that Taliban fighters were radioing to one another that they were preparing to attack the Americans closing on their positions, the soldiers decided to call their bluff.

When the resulting battle subsided more than five hours later, dozens of Taliban were dead and Sgt. Justin Hormann had earned a Bronze Star with &#8220;V.&#8221;

Hormann earned the award for saving the life of another soldier and leading a squad that was &#8220;outgunned (and) outmanned,&#8221; according to the award narrative, and pinning down a force of Taliban fighters five times larger than his own.

By the end of the mission, more than 76 Taliban were dead, including 42 killed as a direct result of the actions of Hormann&#8217;s squad.

The 22-year-old native of Melbourne, Fla., said that the June 21, 2005, mission in the Sharak Darreh river valley of Afghanistan had started as any other.

The Vicenza, Italy-based soldiers were hunting for a Taliban district chief who was believed to be living in the area. The man had led a recent attack that had destroyed the legitimate Afghan government district headquarters.

Hormann&#8217;s platoon inserted near the headquarters, then tried to trick the Taliban into believing that they were leaving the area. Another unit was to move in to engage any enemy forces in the area.

Instead, Hormann and the rest of Chosen Company&#8217;s 2nd Platoon became the hunted &#8212; as well as the hunters.

The 25-man platoon was moving toward some high ground when they were attacked by about 50 enemy fighters with rocket-propelled grenades, AK-47 assault rifles and machine guns.

The unit&#8217;s 1st Squad was ordered to move over a rocky hilltop and get closer to the enemy.

When they had gotten within 30 feet of the enemy, the squad leader was hit in the arm and suffered severe bleeding.

Seeing this, Hormann sprinted about 30 feet to the staff sergeant and applied a tourniquet that stopped the man from bleeding to death.

He then ordered the wounded soldier moved back to the command post and took charge of the squad, leading it back up the hill toward the enemy.

Hormann led the squad for the next four hours of fighting, during which another soldier was wounded, and the squad was ordered to pull back. Grabbing the wounded man&#8217;s Squad Automatic Weapon, Hormann lay down suppressing fire that allowed the squad to move down from the hill.

Eventually, the soldiers set up a patrol base for the night, and later were flown from the valley.

A few days later, Hormann found out both that the wounded soldiers would be fine, and that he was being recommended for a Bronze Star.