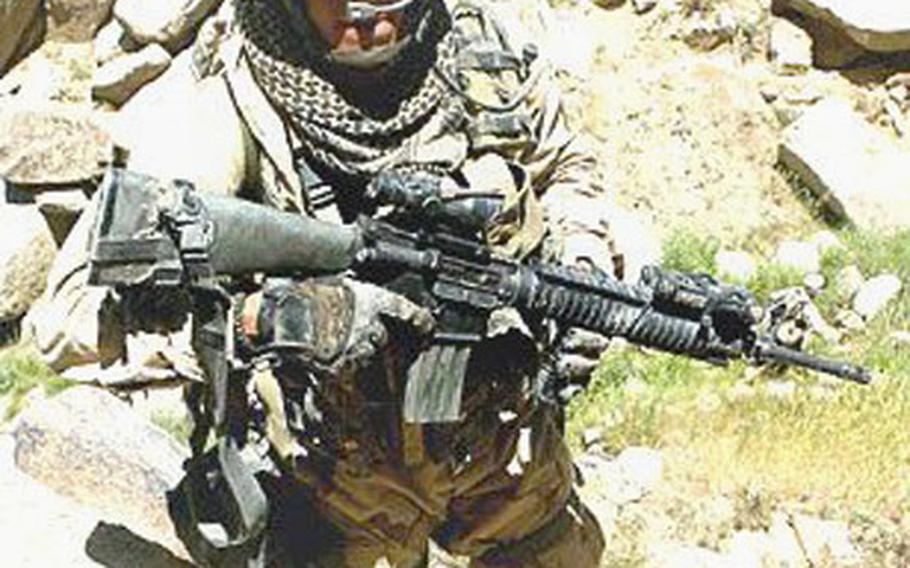 Despite a bullet in the leg, Marine Staff Sgt. Anthony Viggiani continued to lead his squad against the enemy in Afghanistan in 2004. (Courtesy of U.S. Marine Corps)

With the typical stone-faced grit of a Marine, Staff Sgt. Anthony Viggiani is modest about how he came to be awarded the Navy Cross, the service&#8217;s highest award.

Regardless of how Viggiani feels about the award, the dedication to his &#8220;boys&#8221; while deployed to Afghanistan in 2004 is evident. Viggiani crept up on an enemy position and took out three fighters. And even after taking a shot to the leg, Viggiani didn&#8217;t leave his unit.

Soon, Viggiani led a squad on a chase of the insurgents, which led them into mountainous terrain that thwarted some of the technological advantages normally held by U.S. forces.

Enemy forces began firing on one of Viggiani&#8217;s teams from a well-entrenched cave position, pinning them down.

Under fire from another enemy position, Viggiani scrambled to lob a fragmentation grenade into a cave holding the forces that had trapped one of his teams with furious gunfire.

&#8220;I saw a cloth in there and fired three or four rounds inside,&#8221; he said. &#8220;The cloth moved, and I saw skin. I fired about three, four more rounds. Then I pulled the pin on the frag, dropped it down, took two steps and plastered myself against the rock. [Expletive] went everywhere. Cloth, blood, everything.&#8221;

Soon, machine gun fire came in Viggiani&#8217;s direction from across the way. He took a shot to the leg as he and another noncommissioned officer tried to avoid the fire. Air support soon came through and cleaned out the enemy position that had hit Viggiani.

Seeking medical treatment for his wound during a lull in fighting, while the enemy was still precariously close, was just not an option that day, he said.

Instead, Viggiani focused on the other guys who were injured, and how things could have been much worse.

During a Company C dinner in Rota, Spain, as the deployment was ending, Viggiani was recognized by those who knew what he had been through.

For almost a year, Viggiani has been training the next wave of Marines as a drill instructor at Parris Island.

Viggiani still stays in touch with the team and squad leaders who were with him that day in Afghanistan.