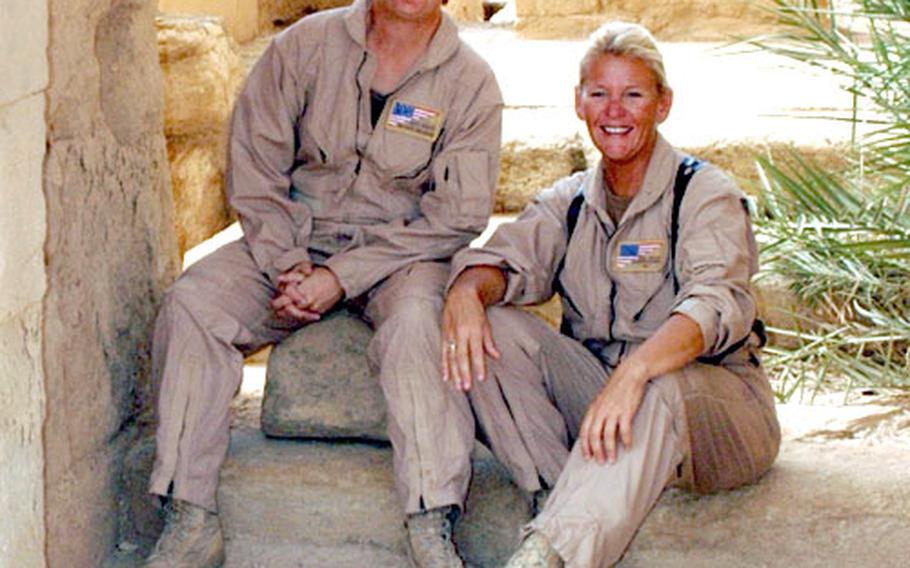 After months searching for mass graves in Iraq, Army Reserve Majors Lauralee McGunagle and Kathryn Van Auken had grown used to the horrors that lay just below the desert surface.

But they weren&#8217;t ready to find 10 mortar shells hidden underground outside Karbala. And they found them the hard way.

&#8220;They exploded in the middle of our (12-vehicle) convoy,&#8221; McGunagle said. &#8220;The asphalt became shrapnel, and nearly cut the vehicles in half. These were unarmored SUVs. But everyone survived.

Foreign troops serving with the pair said it was more than luck. They lobbied U.S. commanders to honor Van Auken and McGunagle for their calm leadership following the blast, coordinating medical and military backup among three foreign fighting forces and keeping everyone safe.

Army officials agreed, awarding each a Bronze Star with &#8220;V&#8221; for &#8220;courage under fire&#8221; and protecting the lives of the civilian investigators with whom they had become close friends.

The IED attack came Feb. 14, 2004, as the recovery convoy moved just outside of Karbala.

The two U.S. soldiers were accompanied by a team of Kuwaiti forensics experts who had just investigated another mass grave site, as well as a unit of Thai engineers and a squad of Polish military police.

The convoy had just turned onto a raised causeway when the daisy-chained shells were detonated, sending dirt and glass everywhere. Van Auken said the group had encountered IEDs in the past, but nothing this large or destructive.

The U.S. soldiers immediately tried to move the vehicles out of the area, fearful of a secondary attack. But the vehicles hit were completely disabled, and several of the injured civilians were wandering away from the convoy, panicked and disoriented.

So McGunagle and Van Auken rushed out of their vehicle and into the exposed roadway, scanning the area for signs of another attack.

McGunagle said the pair knew the convoy was very vulnerable, and started directing the still-functioning vehicles to form a perimeter and protect the Kuwaiti casualties. Both women split their attention between administering first aid and readying the group to defend themselves for the next attack.

That ambush never happened. Rescue crews and a Russian helicopter escort arrived on the scene a few minutes later and pulled the injured investigators out.

The women downplayed how important their role was in the aftermath, especially since the second attack never came.

But Army officials said just moments after the explosion the scene was filled with large crowds of Iraqis and vulnerable team members and, without their leadership, the situation easily could have turned tragic.

McGunagle said the incident left all of the group shaken &#8212; &#8220;we knew how to curse in four languages after that&#8221; &#8212; but also brought the group closer together. The Polish MPs were impressed with the women&#8217;s fearlessness, and the wounded civilians credited them with keeping them calm and safe until backup arrived.

The two women spent 16 more months traveling around Iraq after the attack, helping to investigate and uncover more graves. The roadside bombs didn&#8217;t discourage them in the least.