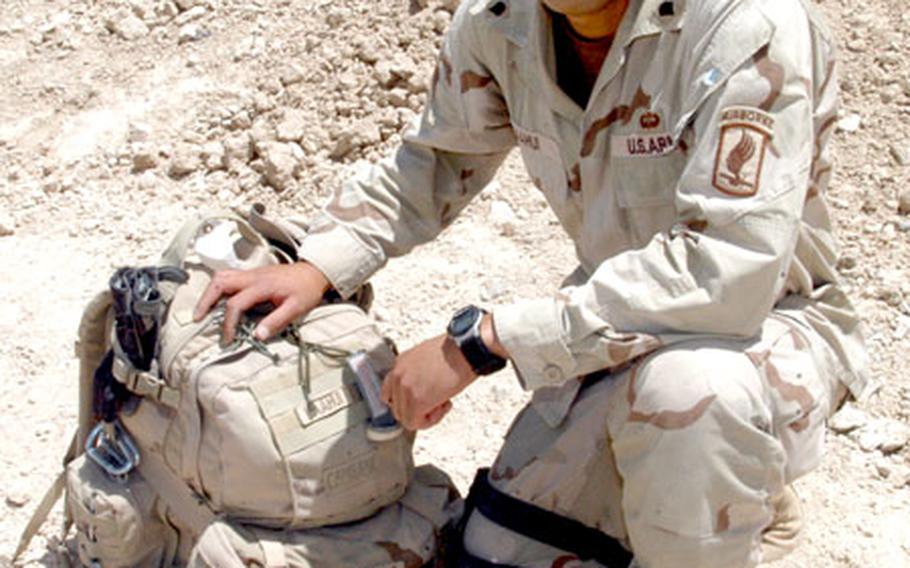 Spc. Kurt-Alexander Kaahui was honored for treating and evacuating five soldiers while under heavy fire in Afghanistan. (Jason Chudy / S&S)

When enemy forces wounded his fellow soldiers on June 21, 2005, Spc. Kurt-Alexander Kaahui responded without hesitation, repeatedly exposing himself to Taliban fire in order to treat his comrades during a seven-hour battle.

Because of his actions that day, the 32-year-old Olowalu Village, Hawaii, native would be recommended for a Bronze Star with &#8220;V,&#8221; having treated and evacuated five soldiers while under heavy fire.

All of the soldiers would eventually make a full recovery.

Kaahui&#8217;s Vicenza, Italy-based Company C, 2nd Battalion (Airborne), 503rd Infantry Regiment was in Afghanistan&#8217;s Sharak Darreh river valley, hunting for a Taliban district chief who was believed to be living in the area. The man had led a recent attack that had destroyed the legitimate Afghan government district headquarters.

Within a half-hour of landing, Kaahui&#8217;s platoon was attacked by about 50 Taliban fighters with assault rifles, machine guns and rocket-propelled grenades, firing at them as they climbed a rocky hill.

One of the platoon&#8217;s soldiers was hit in the thigh and immediately moved to a casualty collection point. Kaahui ran about 300 yards across an open field, all while under direct enemy fire, to treat the soldier.

After stabilizing the casualty, according to his award narrative, Kaahui moved the soldier another 300 yards to a landing zone, continually monitoring and reassuring him that he&#8217;d pull through despite the heavy enemy fire.

While Kaahui was evacuating the first casualty, the platoon took more wounded. Kaahui took the company commander&#8217;s rifle and moved back up the hill, &#8220;dodging intense enemy machine gun and RPG fire,&#8221; according to the narrative.

As Kaahui tried to move up the hill, he was frequently pinned down by enemy fire. Most frustrating was &#8220;not being able to be there when the call came,&#8221; said the three-year Army veteran.

Slowly but surely, he made his way up the hill to the casualties.

Kaahui assessed the casualties, stabilized them for movement, and moved them back to the landing zone, all under clear enemy fields of fire.

&#8220;Kaahui never hesitated or faltered,&#8221; his award narrative read. &#8220;Despite the number and types of casualties, the heat, terrain and unrelenting fire, Spc. Kaahui treated every soldier with care.&#8221;