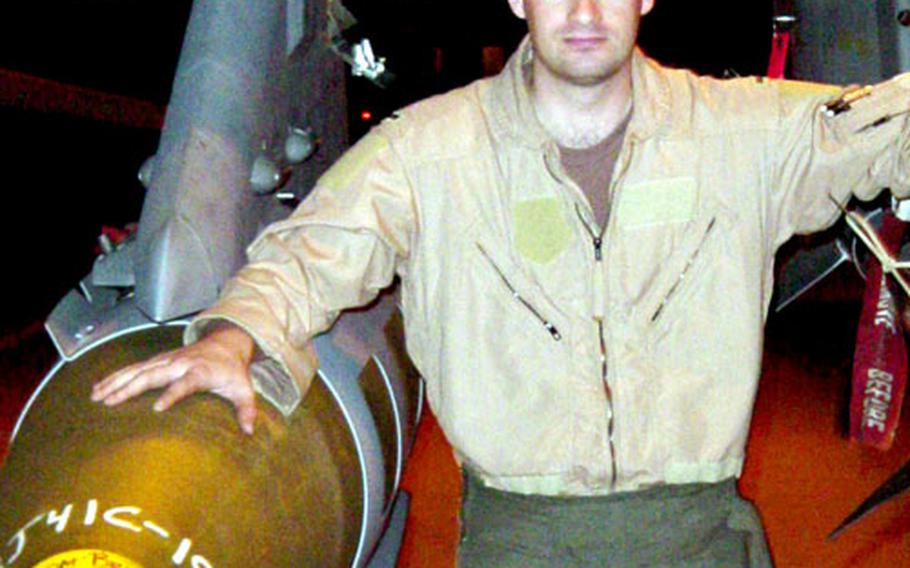 Huddled around a television in March 2003 at Al Jaber Air Base, Kuwait, F-16 pilot Steve Engberg and other 524th Fighter Squadron members watched as President Bush delivered his ultimatum to Saddam Hussein: Leave Iraq or face war with the United States.

&#8220;There was a feeling of uncertainty knowing that something would happen but not knowing exactly what our role in that was going to be,&#8221; he said. &#8220;It was exciting at the same time to be able to apply the training I&#8217;d gotten ever since becoming a fighter pilot.&#8221;

The initial days of armed conflict and daily combat missions seemed much like the deployment&#8217;s previous three months, Engberg said. His unit from Cannon Air Force Base, N.M., had been helping with Operation Southern Watch, which monitored the no-fly zone over southern Iraq.

But his actions on March 30 &#8212; three successful sorties over a 12-hour period, dodging heavy anti-aircraft artillery and surface-to-air missiles throughout the night &#8212; eventually earned him the Air Force&#8217;s prestigious Distinguished Flying Cross.

Engberg, of Burnsville, Minn., is now a captain serving as assistant operations director for the 36th Fighter Squadron at Osan Air Base, South Korea. Then, he was a 25-year-old first lieutenant who took off from Al Jaber that night with his lead pilot to find regime targets in Baghdad. They were engaged by enemy ground fire almost immediately.

&#8220;They were constantly throwing up (anti-aircraft) fire on different missions. How heavily you experienced it just depended on the mission. Due to where these targets were, the concentration of enemy fire was a little thicker that night.&#8221;

Upon returning to Kuwait, the pilots received information for a second sortie.

His F-16 this time fitted with laser- guided bombs, Engberg headed back out to strike Fedayeen targets in Karbala. &#8220;The maintainers did a great job of reloading us and we scrambled again,&#8221; he said.

Poor weather forced him to circle the area at low altitudes, but he managed to destroy the Fedayeen building. A short while later, Engberg provided close-air support as his flight leader attacked another Baghdad location.

Despite the heavy enemy fire, he said, the possibility that they might not make it back never crossed his mind.

Engberg&#8217;s squadron emerged unscathed, he said: Its personnel and aircraft all returned to Cannon with no battle damage.

&#8220;The entire squadron was extremely motivated and excited to be out there performing their duties &#8230; I think we all performed to an exceptional level when the challenge arose, met it with great professionalism and great lethality. We were all just proud to serve the way we did.&#8221;

And Engberg was happy he roomed with two other lieutenants, including Chad &#8220;Skeet&#8221; Martin, who also earned the DFC and later joined him at Osan. The brand new wingmen all faced the same highs and lows under difficult circumstances.

&#8220;I was feeling camaraderie with those other two pilots the entire time,&#8221; Engberg said. &#8220;Having that release to talk and hang out with those guys after different missions helped a lot. They&#8217;re some of the most poignant memories I have from that deployment.&#8221;