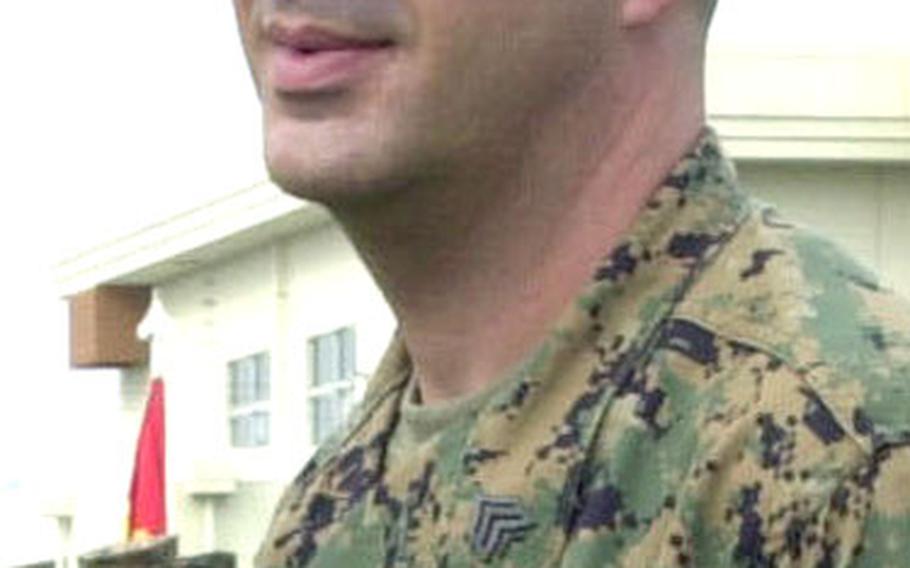 Marine Sgt. Keith Camardo says he did nothing more than any other Marine during his time in Iraq. The hierarchy of I Marine Expeditionary Force begged to differ. He was awarded the Bronze Star Medal with &#8220;V.&#8221;

Camardo was assigned to the unit as an individual augmentee February to September 2004. His home unit is 9th Engineer Support Battalion at Camp Hansen, Okinawa, where he serves as an explosive-ordnance disposal technician. While in Iraq, Camardo served with an EOD team pieced together with Marines from four different bases.

The team served primarily in the city of Mohammadia in the Anbar province. Camardo said he believes that during his time there, team members may have had it worse than most other EOD teams: They were finding 500-pound bombs daisy-chained together as one giant improvised explosive device. During its seven-month tour, Camardo said, the team responded to more than 300 EOD calls and faced numerous ambushes and firefights.

The longest day, Camardo said, was when the Army entered its forward operating base looking for help. He said an Army convoy drove through an ambush that &#8220;lasted for miles&#8221; and had to leave some gear. The Army asked the Marines to help by retrieving it. The Marines obliged and sent a three-man EOD team, including Camardo, out to help by checking for booby traps.

He said the ambush went on for so long, they finally decided to stop at an intersection. Camardo said a gas station with burning tanks was on one side and they were taking fire from all other directions. The driver of the wrecker in which the Marines were riding parked the vehicle, then ran to take a defensive position. Camardo and his fellow EOD Marine then climbed atop the vehicle with their &#8220;designated marksman rifle&#8221; and spotting scope.

He said they stayed atop the wrecker for about a half-hour before moving to the roof of a nearby building and continuing the firefight. In all, the ambushes and firefight lasted more than eight hours, Camardo said.

But one of the closest calls for Camardo came in September, near the end of his tour, after an Army vehicle was disabled from an IED. The vehicle was moved off the road and the area was secured, causing a long traffic jam. To get the wrecker in to pick up the vehicle, Camardo said, traffic had to be released.

That&#8217;s when a suicide bomber in a car was able to drive to the back of a South African armored vehicle and detonate. Camardo&#8217;s Humvee was parked nearby; he was sitting in the rear seat with the door open. He said the blast threw him off his seat and knocked him out for a second.

&#8220;I stepped out of the vehicle, took one breath and then threw up for about a half-hour,&#8221; he said. He said that just the suicide bomber was killed but the massive blast scattered car parts everywhere; the engine flew about 50 meters &#8212; totally outside their perimeter.