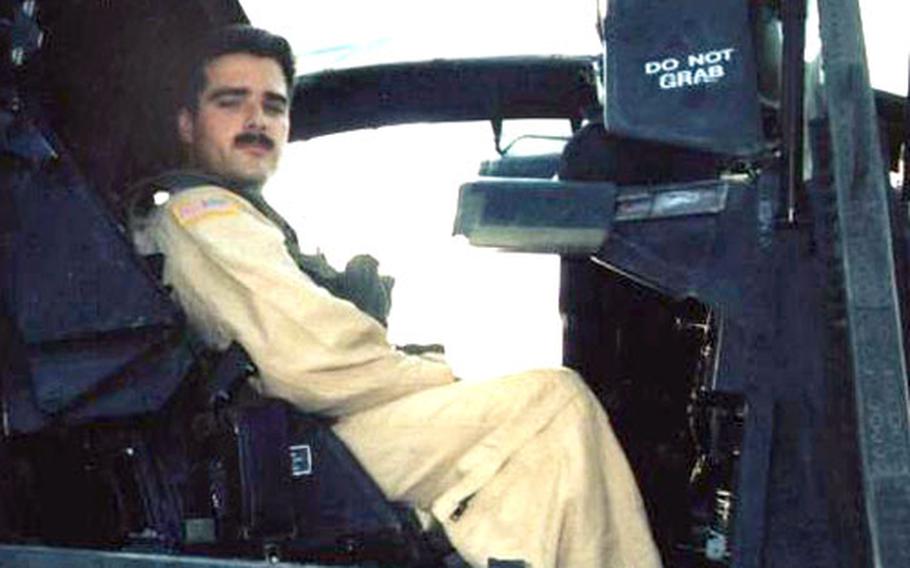 Apache pilot Chief Warrant Officer 3 Brian Mucci earned an Air Medal with “V” for missions flown in Iraq during the first year of the war. (Courtesy of CWO3 Brian Mucci)

Days into the start of the war in Iraq, a group of Army Apache helicopters with the 101st Airborne Division outflew their supplies by about five days. They landed in the Iraqi desert out of fuel and waited for their supply lines to break through vicious sandstorms to reach them.

They were some of the first across the berm, 48 pilots out alone in the desert with little food or water.

Fast-forward a few weeks, and the Apache pilots continued some of the most dangerous missions: serving air patrols for convoys and doing &#8220;deep territory&#8221; attacks in places in which the war still raged hard.

One of those missions stands out: In April, Mucci was in the rear aircraft in a line of six Apaches. They were sent to help accept the reported surrender of an Iraqi armored division.

But the Iraqi Republican Guard beat them to the division and forced it to fight. The group of hundreds of tanks, armored personnel carriers and other vehicles had hidden in a ravine, near where they were expected to be waiting. After the five other Apaches passed, Mucci and his co-pilot were in closest range.

A bright flash shot by, a softball-size mass of lead. &#8220;We actually thought we were hit,&#8221; he said. The blast flew so close they felt the pressure on their legs inside the cockpit.

Mucci fired almost everything he had to repel the attack as his co-pilot ducked through a barrage of fire. His summation: &#8220;It was 23 minutes of us getting shot at.&#8221;

An artillery round hit the ground so close that dirt sprayed their windshield.

When reinforcements clearly were needed, Mucci called in the grid coordinates to a U.S. artillery unit, and two Army tactical guided missiles quickly put a stop to the assault.

For that particular day&#8217;s work, however, Mucci received an Air Medal with Valor &#8212; in recognition, he said, of the amount of enemy assets they destroyed while under fire.

For his work months later, safeguarding a crash site after a Black Hawk was shot down near Tikrit, Mucci earned an Air Medal for Achievement. He picked up one more Air Medal for his time in combat.

He said his most memorable war experience came during a stop in Mosul in the north. There was nowhere to land on the Army base that was his destination, so he stopped in a field, which turned out to be a school.

Swarms of students and adults came out to meet the pilots, giving him an interaction with local Iraqis most soldiers never get to experience.