Heroes 2006: ‘It felt like my body was burning from the inside out’ 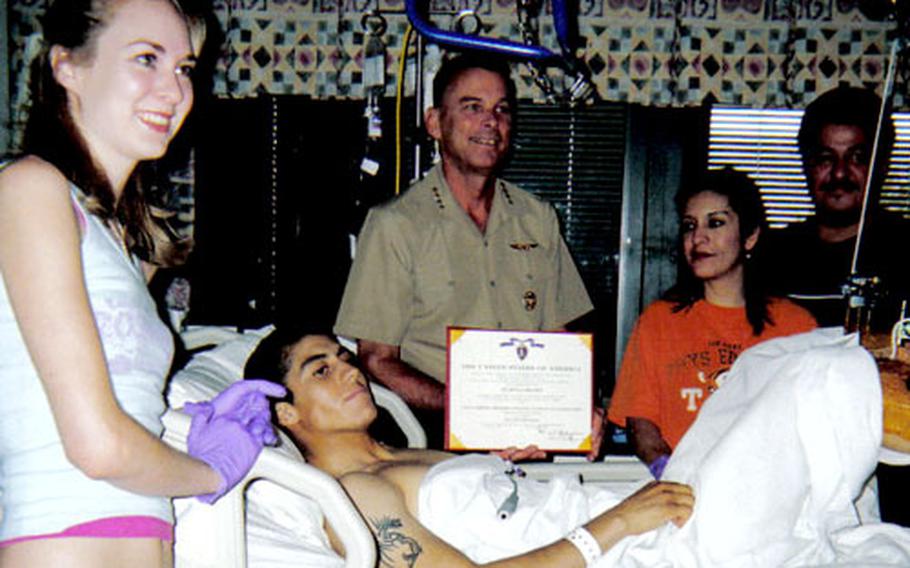 Lance Corporal Ben Gonzalez, center, receives a certificate for his Purple Heart from Gen. William “Spider” Nyland, Assistant Commandant of the Marine Corps, at the National Naval Medical Center in Bethesda, Md., about 10 days after he was injured. His wife Mindy, far left, and parents Diana and Denny Gonzalez look on. (Courtesy photo)

As tired as he was after a night on watch at Saqlawiyah Bridge in Fallujah, Lance Cpl. Ben Gonzalez could sense that something had been thrown at him.

He didn&#8217;t really see it coming, he said, but the body has a funny way of detecting movement, of perceiving threats.

When it landed with a &#8220;clink&#8221; just a few away from him and fellow Marine Cpl. Charlie Koczan, dozing on the ground nearby, it took only an instant to figure out what it was: a grenade.

With just a split second to react, Gonzalez could see that his sleeping friend had no idea what was about to happen, and he threw himself on the man to protect him from the blast.

When it went off, the explosion ripped into Gonzalez&#8217;s lower legs, feet and abdomen, wounding two of the other three men from Company F, 2nd Battalion, 1st Marine Regiment in the fighting hole, but leaving the sleeping man unhurt.

For his action on that morning and his efforts to protect a friend on June 18, 2004, Gonzalez was awarded the Silver Star for conspicuous gallantry, a decoration he received this year in March.

Now back in his hometown of El Paso, Texas, and still recuperating from his wounds, the 21-year-old said recently the most vivid memory he has of that morning was looking down to see his boot half-torn off his foot.

&#8220;I turned around and I saw my boot was half off and my left leg was kind of crooked,&#8221; he said. The gear Marines wear in Iraq is tough, he said, and he just couldn&#8217;t seem to grasp that the explosion had shredded his footwear.

Things had been pretty quiet the preceding two or three weeks in Fallujah, Gonzalez said. His platoon was rotating duty in observation posts for an Iraqi National Guard unit controlling traffic at the bridge, and little was happening, he said.

He was just coming off a night watch when two men on a motorcycle sped by and threw the grenade at the four Marines.

The first thing Koczan recalls was being awakened by the &#8220;the boom and the screams&#8221; and Gonzalez rolling off him, he said.

As the only one not hit, Koczan was immediately dispatched to lead the defense, while the others attended to Gonzalez&#8217;s wounds, which included serious damage to his legs and hundreds of small shrapnel wounds throughout his lower body.

Gonzalez is normally somewhat of a joker, so they tried to calm him by telling him to think of women, said Cpl. Avery Williams, another Marine in the hole that day. But humor could do little to help at the time.

Gonzalez&#8217;s injuries were enough to cause doctors to doubt whether he would be able to walk again, but by this spring he was able to get around with a cane.

Two years after the attack, he says he jokes about the incident with the other men who were there that morning.

He ribs Koczan that he should have just jumped over him instead of on him, and Koczan said they have both caught flak for &#8220;spooning&#8221; on the job. The jokes for Koczan, however, don&#8217;t diminish what his friend did for him.

Gonzalez said his improving mobility and experiences in recovery have changed him deeply.