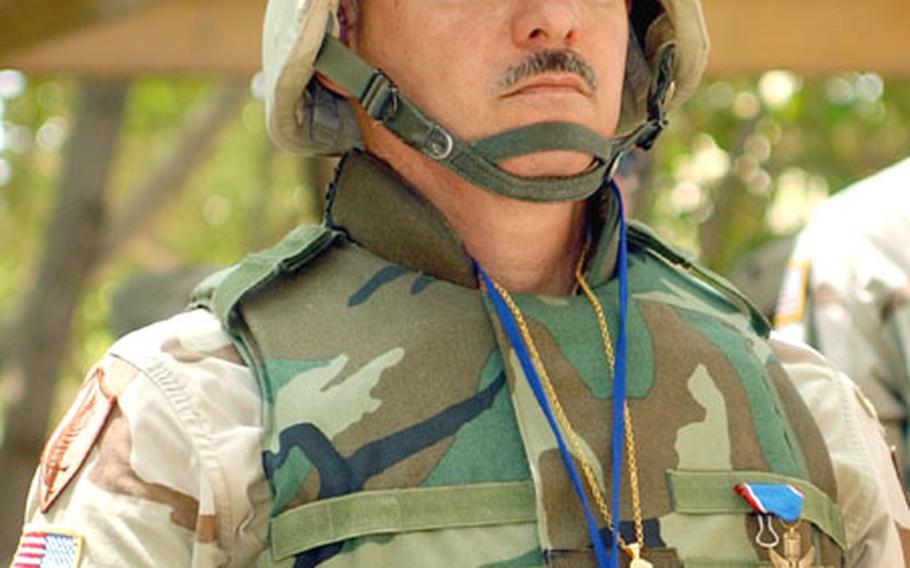 Standing in the blood of his Iraqi counterparts, back to the wall with just four bullets and a &#8220;folding flip knife&#8221; to defend against onrushing insurgents, Col. James Coffman Jr. had just one thought going through his head.

Instead, Army Lt. Gen. David Petraeus, commander of Iraq&#8217;s Multi-National Security Transition Command and Coffman&#8217;s boss at the time, personally awarded him the Distinguished Service Cross for his actions on Nov. 14, 2005.

The Great Barrington, Mass., native spent most of his 32-year Special Forces career in psychological operations.

When Petraeus, the 101st Airborne Division commander, was tapped to lead the training and equipping of the army and police in May 2004, he asked Coffman to be &#8220;his eyes and ears out on the ground,&#8221; Coffman said.

Eventually, Coffman became the sole American adviser to the 1st Iraqi Special Police Commando Brigade, a group of highly trained forces that belong to Iraq&#8217;s Ministry of the Interior.

In mid-November 2005, the minister of the interior called the commando unit to Mosul to help gain control of the city, which was being overrun by insurgents. Most of the local police had abandoned their posts in fear for their lives.

At 10:30 on Nov. 14, Coffman&#8217;s commandos received an emergency call for help from the only police station in the city that was still staffed. It turned out to be an ambush.

The insurgents pinned down the commandos until Coffman and his men were trapped with the police station to their backs, and a small retaining wall, about 8 feet high, in front of them.

Casualties were heavy and immediate.

All but one of the Iraqi officers were killed or incapacitated within half an hour of the attack.

With their leaders down, the remaining commandos &#8220;were in a fairly excited state,&#8221; Coffman said.

So Coffman took over, using hand signals to mime what he wanted the commandos to do when his fragmented Arabic failed him.

Coffman kept fighting even after a bullet smashed through the palm of his left, dominant hand and into the stock of his M-4 rifle, blowing the gun apart.

He dropped the useless weapon, picked up an AK-47 from a dead commando, and began to fire with his right hand.

The commandos fought on, repelling two charges by the insurgents.

He had vision of being captured, paraded on television and beheaded, like so many other Western hostages.

Just at that moment, &#8220;the cavalry arrived&#8221;: soldiers in Stryker wheeled combat vehicles from the 4th Infantry Division.

The quick response team quickly subdued the insurgents and, four hours after it began, the firefight at the Mosul police station was over.

Out of the 120 Iraqi commandos who had responded to the call for help, 48 were wounded and 13 were killed, including one wounded major who was taken to a local hospital, kidnapped by insurgents and later beheaded, Coffman said.

When Coffman learned that Petraeus had personally submitted him for the Distinguished Service Cross &#8212; the Army&#8217;s second highest award for valor, below only the Medal of Honor &#8212; &#8220;I was completely floored,&#8221; he said.