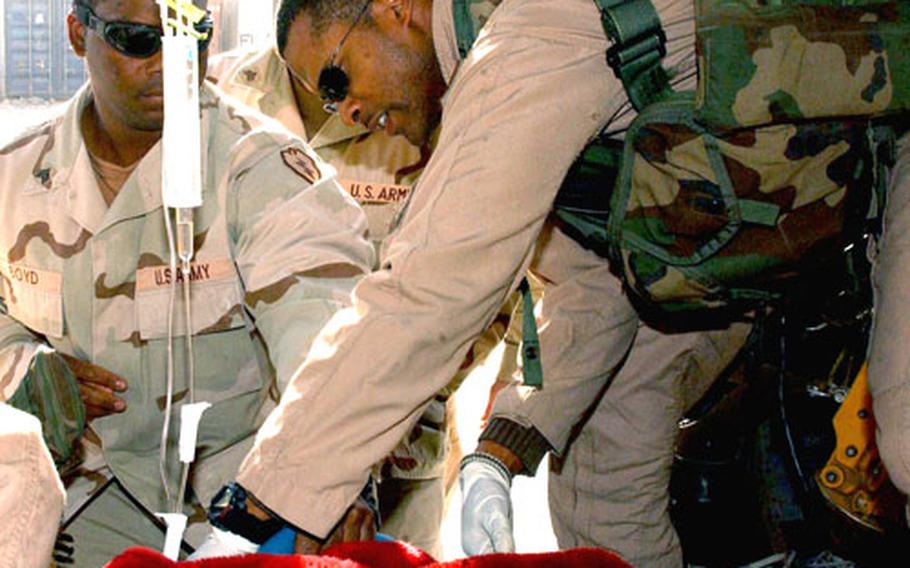 As the medical evacuation helicopter sped to the ridge where two wounded Special Operations Forces troops waited, the flight crew heard ominous sounds over the radio.

It was April 11, 2005. Taliban insurgents had ambushed Afghan forces on a high mountain pass near Khost in an attempt to assassinate a former Afghan military commander. U.S. SOF troops came to the aid of the Afghans, and two of the U.S. troops &#8212; Paul, an Army master sergeant, and Brad, an Air Force tech sergeant, identified by their first names only for security reasons &#8212; were wounded in the fighting.

Campbell &#8212; then a staff sergeant with the 159th Medical Company (Air Ambulance), based in Wiesbaden, Germany &#8212; was serving as flight medic on the helicopter that was assigned to evacuate Paul and Brad.

When the helicopter got to the scene, crewmembers realized that they would not be able to land on the ridge. They would have to use a hoist.

As Campbell was lowered for the roughly 150-foot descent, his radio was smashed against the side of the aircraft. Now he would have to rely on hand signals to communicate with the soldier controlling the hoist.

Campbell continued his ride down, but the hoist stopped.

He started to give frantic hand signals to put him on the ground. Campbell finally reached the ground close to the wounded and was met by an Afghan Special Forces soldier. Campbell noticed dust being kicked up near his feet.

Campbell quickly attended to the critically injured Paul and secured him in a rescue stretcher that was lowered from the helicopter.

Next was Brad. Campbell got him in the stretcher and gave a thumbs-up to the crew chief in the helicopter. Campbell thought he would have time to gather up his gear before riding up with Brad. Campbell turned around, saw the sked was going up and jumped for it.

The wounded were treated on the way back to Forward Operating Base Salerno. When the helicopter landed, Paul and Brad were taken to the emergency room. Paul had lost four pints of blood into his gut but survived. Brad also made it out alive.

U.S. and Afghan forces were credited with killing 12 insurgents. Another Black Hawk that was involved in the mission had more than 50 bullet holes in it. The pilot of that aircraft was awarded the Silver Star for his actions.

For his actions during the 45-minute mission, Campbell was awarded the Distinguished Flying Cross on Dec. 2 in Wiesbaden.