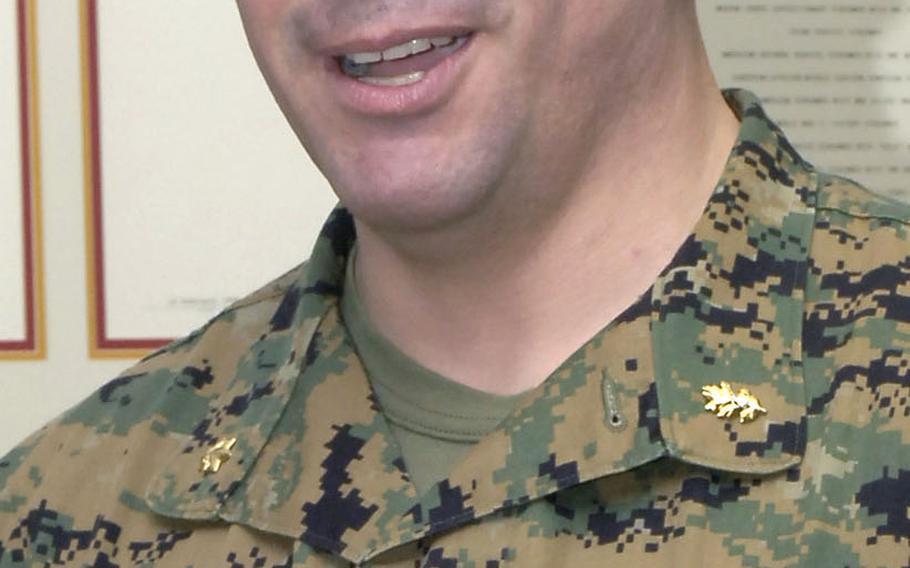 When Lt. Cmdr. Richard Jadick tells his story, he downplays many of the details.

He doesn&#8217;t recall the bullets being that close.

He emphasizes that other teams faced more danger than him.

And when asked why a 38-year-old Navy urologist with a pregnant wife would volunteer to go to Iraq, he seems confused by the question.

Naval officials believe he did more than that.

In the middle of Operation Phantom Fury, the second major operation in Fallujah in 2004 and one of the fiercest battles U.S. forces have faced in Iraq, Jadick and his team of young corpsmen treated hundreds of patients and saved dozens of lives.

But Jadick still isn&#8217;t completely sold on receiving the award, and says the terrible memories he has from the time sound more heroic to others than they do to him.

Just days after the birth of his daughter in June 2004, Jadick deployed to Iraq with the 1st Battalion, 8th Marine Regiment.

The senior medical officer from Camp Lejeune, N.C., had limited experience with trauma cases but was confident that medical knowledge would be invaluable on the battlefield, even though he had never treated a patient at war and had himself missed action in the first Persian Gulf War.

On Nov. 8, Jadick waited at a medical command post just outside the city as his company headed into battle. About 14 hours later, after getting a call about a Marine with a chest wound who needed on-site assistance, he made his first house call in a combat zone.

It took Jadick and his team several minutes to find the wounded man in a near-ruined building. The team patched up his wounds, carried him out and sent him back to the medical post.

While they were finishing up, the medical team received another call, this time from an ambush scene near the city&#8217;s cultural center. They packed up and headed deeper into Fallujah.

The firefight was much more intense here: This time, bullets were striking all around their vehicle as soon as it stopped, and at least two rocket-propelled grenades bounced off the armor without detonating.

And this time, it wasn&#8217;t just one wounded Marine. It was seven and counting.

For the first time, Jadick realized he was risking his life.

Jadick dashed out of the vehicle between automatic weapons fire and dove beside a dying Marine, dragging him behind a nearby wall as he surveyed his wounds.

The man was bleeding profusely from a deep shrapnel wound in his groin. Jadick ran through his first-aid checklist, packing sterile gauze into the hole, applying pressure to the wound &#8212; searching for some way to slow down the bleeding.

After a few minutes, he realized it was a futile effort. He moved on to the next patient.

Right or wrong, Jadick didn&#8217;t waste any time. He taped up one gunshot victim, limped him back to the ambulance, then moved to the next one. In less than 30 minutes, the rescue vehicle was full.

Jadick said the corpsmen with him later told him bullets were bouncing within inches of him as he treated Marines and dragged them back to the armored ambulance. He said he didn&#8217;t notice them, but knew how fierce the firefight was based on the wounds he was looking at.

By the time he left the scene, he was covered in blood.

As the ambulance reached the nearby transfer station and sent on the injured Marines, another groin-wound victim was brought to Jadick. The potentially fatal injury was nearly identical to the one Jadick had treated less than an hour earlier.

Not again, he thought.

The crew worked furiously to pack his wound, set up an IV and get some fluids into him. Within minutes, the private came to and started asking questions.

Battalion commanders said the private was one of seven Marines saved by Jadick&#8217;s quick thinking and bravery on that outing alone.

But Jadick remembers the man who died en route to the transfer station, and the first shrapnel victim he couldn&#8217;t save.

Those deaths &#8212; and the remarkable recovery of the private at the transfer station &#8212; convinced Jadick he needed to move his medical team deeper into the city. He had already drawn up plans for a frontline ER operation in case it was needed, and told battle commanders he could save lives if they could get him closer.

They moved into an Iraqi government complex later that night, and prepared for patients under the subdued glow of their ambulance emergency lights.

&#8220;Although it was supposedly secure there, the chaos gets to you,&#8221; he said. &#8220;I know there was a point as units moved around where my aid station was the edge of the perimeter. [The first night] all the corpsmen who carried M-16s were up, and the rest of us were up keeping our eyes outside the wall.&#8221;

When dawn came on the second day, the team saw their new hospital: a 15-foot-square prayer room in the parking lot where a command center was being established.

The space was ideal from a first aid standpoint, with a plenty of room to move patients around and a clear path to get people and supplies quickly inside.

But the area was a military nightmare: Tall buildings with snipers were all around, and a nearby gateway separating the secure zone from no man&#8217;s land had been destroyed the previous day.

At one point, as Jadick looked over a wounded servicemember about to enter his new emergency room, he spotted an Iraqi sniper taking aim from 50 yards away. As he took the man inside, he asked nearby Marines to &#8220;please&#8221; take out that gunman.

Later, a lieutenant patrolling the parking lot was shot by an enemy sniper and died before the team could treat him.

In the first 72 hours, more than 60 wounded troops were brought in. Many of the wounds were gruesome: skull trauma, missing limbs, massive hemorrhaging.

But Jadick said his instinct to get closer to the fight was right. Of the nearly 100 patients they saw in the first week there, at least a dozen would not have been saved if they had to wait through an extra trip to medical stations outside the city.

During that week, Jadick got even closer to the fight, traveling out with some patrols to the front lines to meet with the unit&#8217;s other corpsmen and the battle-weary Marines.

&#8220;There&#8217;s a morale thing to that, when they know that their medical team is close enough that if they get shot they can actually have a fighting chance at getting evacuated,&#8221; he said.

Most of the medical team stayed at the hospital/prayer room for 11 days before the regiment was ordered out of the city to secure another area.

Jadick said he continued to see patients and gore after the Fallujah campaign &#8212; just days later, on Thanksgiving, he helped save six more men but had two die before they could be helped &#8212; but nothing that compared to the 12 days during the siege.

When he returned stateside in January 2005, he did not publicly discuss details of what happened until a year later, when Navy officials awarded him the Bronze Star. His wife, Melissa, knew little about his time in Iraq until she began reading news reports about his heroic acts.

Part of the reason for his silence was a desire not to relive the horrors he had seen, Jadick said.

But a bigger part was Jadick&#8217;s insistence to this day that his actions weren&#8217;t as heroic as those of the Marines around him.

But for members of the 8th Regiment, that job was more than a typical day in the office: Officials credit Jadick with saving more than 30 U.S. lives during the siege.