Heroes 2006: Heroes for a devastated land 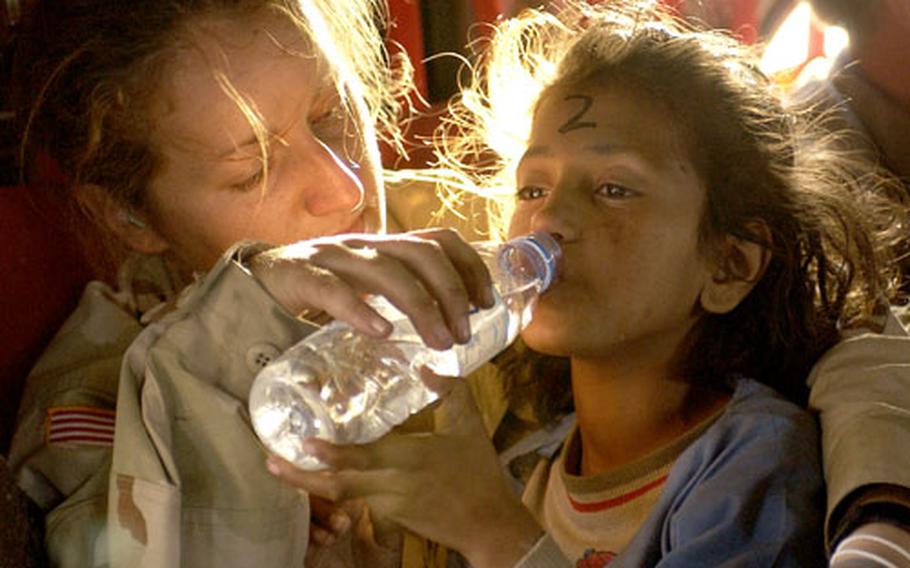 U.S. Army Sgt. Kornelia Rachwal gives a drink of water to a Pakistani girl being flown from Muzaffarabad to Islamabad, Pakistan, aboard an Army CH-47 helicopter. (U.S. Air Force)

There was nothing really heroic about it, at least not in the classical sense.

On short notice, hundreds of U.S. servicemembers deployed last fall to northern Pakistan to assist in earthquake relief efforts. They were joined by military personnel from other nations, such as Australia, Japan and Germany.

Given the lethality of the 7.6-magnitude earthquake that struck the Kashmir region Oct. 8, there was little choice.

And, to make a shaky situation even worse, the harsh Himalayan winter was looming.

&#8220;There&#8217;s no telling how many lives they (U.S. personnel) saved,&#8221; said Army Lt. Col. Sam Hamontree, deputy commander of the 4th Aviation Brigade, which sent rotary aircraft, personnel and equipment to the area.

Each service had a hand in the relief effort. Navy Seabees cleared roads and swung hammers; Navy ships and Air Force cargo planes delivered aid, from rice and cooking oil to blankets and bandages; the Army dispatched a water purification detachment; a Marine rigging crew helped Army and Navy helicopter crews; and the Army and Marine Corps medical personnel ran separate hospitals near the quake&#8217;s epicenter.

The initial U.S. force consisted of several Army Chinook and Black Hawk helicopters sent to Pakistan from Bagram Air Base in Afghanistan. Navy and Marine aviators got into the act, too.

That airlift contingent was eventually succeeded by Task Force Eagle, which supported and coordinated much of the massive U.S. humanitarian relief effort. Headed by Army Col. Robert Johnson, commander of the 4th Aviation Brigade, Hanau, Germany, the task force worked out of a hangar at Qasim air base, located just south of the capital city, Islamabad.

Other units, such as the 212th MASH task force, the 267th Quartermaster Company, and the Marines Combined Medical Relief Team 3, moved north to be closer to the disaster area.

Within weeks it was pretty clear they wouldn&#8217;t wrap things up that soon. Hospital visits to the 212th MASH in Muzaffarabad, for instance, continued to climb, averaging more than 300 a day by year&#8217;s end.

Some personnel wound up staying in the region until late March.

Obviously, the primary and overriding purpose was to support the government of Pakistan in providing assistance to affected areas.

But the United States also viewed the effort as a way to &#8220;improve [its] strategic relationship with Pakistan,&#8221; according to the task force&#8217;s mission statement, something Johnson and others were keenly aware of.

&#8220;We had a chance to influence an entire generation in a known terrorist stronghold,&#8221; said Army Maj. Kevin Rants, the task force&#8217;s logistics officer.

They exerted influence in subtle and not so subtle ways.

One way they won over the skeptics, Johnson said, was to let the Pakistani people see the U.S. military at work in a humanitarian operation.

Allowing health-care providers to travel to villages to offer medical treatment helped neutralize some of the negative sentiments that existed.

The goodwill the task force built up unraveled a bit in mid-January, when the United States bombed a suspected terrorist hideout near the Afghanistan-Pakistan border, said Hamontree, the deputy commander of the 4th brigade. The task force was further handicapped by the cartoon controversy involving a Danish newspaper and the Islamic prophet Muhammed.

Still, despite the suspicions and setbacks, soldiers like Rants and Gonzales said they felt good about what they and the others accomplished.

Read profiles of U.S. servicemembers recognized for their valor in the 2006 edition of this Stars and Stripes special section: