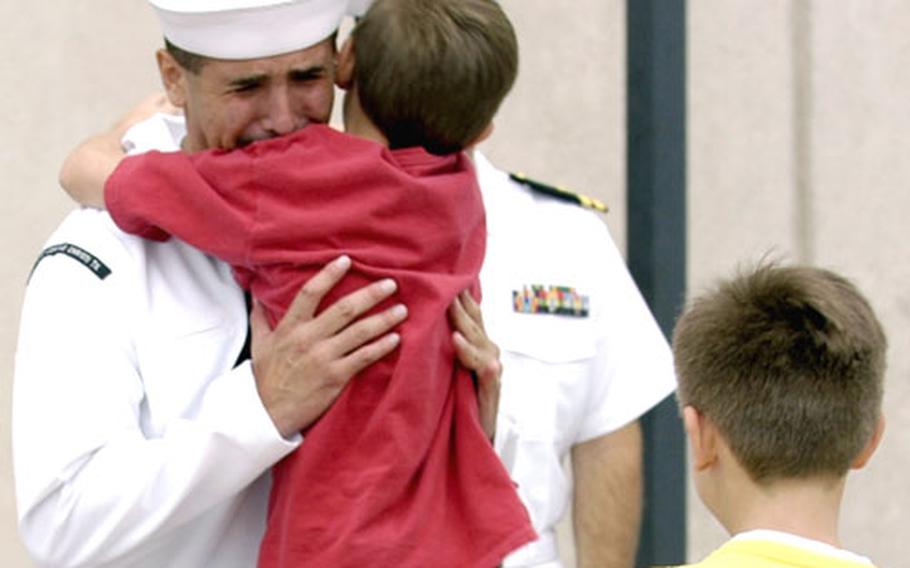 Hospital Corpsman 2nd Class Juan M. Rubio gets a hug from one of his children after he was awarded the Silver Star. (Courtesy of U.S. Navy)

Hospital Corpsman Juan Rubio grabbed a Marine he was on patrol with to repeat a warning the radioman hadn&#8217;t heard.

Their platoon leader had told them that the 5-gallon aluminum can on a nearby wall was the kind of thing insurgents often used as a marker, to know when to set off a bomb by remote.

Seconds later, Rubio came to. With rocket-propelled grenades and machine guns roaring, he low-crawled over to 19-year-old Lance Cpl. Brian Parrello, who had absorbed much of the blast. He was in bad shape.

Directing cover fire at muzzle flashes in a tree line and shooting his own M-16, Rubio came first to a major whose name he does not recall.

Rubio brought him behind a building, and put a tourniquet on his severed forearm. He grabbed another Marine to monitor the major. The Marine saw another wound.

Rubio went back and found out that his gunnery sergeant was shot twice in his right hand. He started an IV and left him with another Marine. He then got to a Marine who was shot in the leg and the least critical of the four.

With their radioman down, they had to send two runners back to the boats they&#8217;d been patrolling the Euphrates on before an ambush had brought them into the small hamlet of Haqlaniyah, near their base at Haditha Dam.

The boats and their firepower were nearby, but they had no sense of the battlespace, having lost radio contact with Parrello. But with the runners directing fire, they opened up.

They drove about a mile and a half upstream to three Humvees waiting outside the base. They roared to the base, where medics at a battle aid station could administer more care while they waited for the arriving Medevac helos.

Not sure about the fate of the insurgents, Rubio and two Marines got back in the Humvee to rejoin the battle. They were speeding off the base when one of the Marines saw blood on Rubio&#8217;s leg.

They were in radio contact with the other chopper carrying Parrello. Rubio had been talking with him on the boat and in the Humvee, keeping him alert, reassuring him that he would be OK.

Rubio begins to choke up when retelling the scene.

Over the radio, he heard that Parrello had lost consciousness. He never awoke.

Rubio was awarded a Silver Star for his actions that day. And, of course, a Purple Heart.

At the hospital at al Assad, doctors looked at Rubio. They told him that if he wanted some of the deeper pieces of shrapnel taken out, he&#8217;d have to go back to the States.

A day and a half later, he hopped a convoy back to the unit.