Heroes 2006: ‘Americans will not make it out alive’ 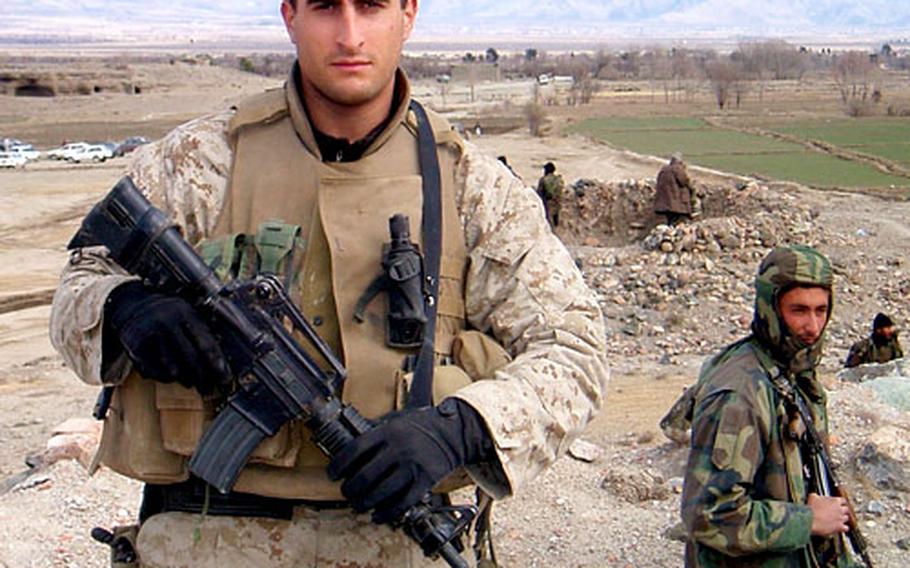 Screams from fellow Marines being attacked by insurgents in a mountainous area of eastern Afghanistan were all that 1st Lt. Stephen Boada needed to hear.

In February, the 27-year-old from Bristol, Conn., was awarded the Silver Star for his actions that day.

While on a dismounted patrol through the Alisheng Valley, Boada&#8217;s unit of about 30 Marines began to pick up radio traffic between insurgents on their Icom scanners. Interpreters informed the Marines that the insurgents &#8212; concealed in the rough terrain &#8212; were plotting an ambush.

&#8220;The Americans will not make it out alive,&#8221; Boada remembers one of the insurgents saying on the radio.

To keep one step ahead of their enemies, the Marines tried to call in helicopter support. However, the weather did not permit such action, so the Marines forged ahead in a movement-to-contact approach, said Boada, who was a forward air controller at the time.

A few Marines on top of a hill scanned the area and spotted 10 armed individuals walking across the valley. A single rifle shot, believe to have been fired by one of the individuals, prompted the Marines to open up machine gun fire on the enemies, about 800 meters away.

The other Marines, including Boada, pushed toward their adversaries, who were fleeing up the mountainside as the machine gun team on the hill provided supporting fire.

While making their way up the ridge, Boada called for fixed-wing air support. Four A-10 Warthogs came roaring over the valley, unleashing 30mm cannon fire and 2.75-inch rockets onto the enemy locations, as Boada, with help from the machine gun team, called in target adjustments to the aircraft.

After about eight passes by the A-10s, the Marines searched for enemies killed or injured by the barrage, he said.

Lance Cpl. Nicholas C. Kirven came across a body and called out to Cpl. Richard P. Schoener to provide security.

Boada was about 25 meters from Kirven and Schoener when he heard the bursts of an AK-47 rifle and the screams of both Marines, he said.

The rest of the Marines began to circle around Kirven and Schoener, who were lying near a cave whose mouth spat out persistent gunfire.

Using a smoke grenade for concealment, Boada and Cpl. Troy Arndt made it up to the Marines.

Arndt grabbed Schoener but couldn&#8217;t drag him away. Boada then tried to help Arndt, but Schoener&#8217;s flak vest ripped. Boada and Arndt had to take cover after more enemy gunfire came from the cave.

Boada fired his M-9 pistol and threw four grenades into the cave to eliminate the threat.

Other Marines tried to resuscitate Schoener and Kirven, but were unsuccessful.

On top of their loss, the Marines could not get a medical evacuation and had to carry both bodies back to the vehicles that were about six miles away, he said.

Although Boada has been called a hero, he said he believes that the two Marines who didn&#8217;t walk away from that fight are the real heroes. Arndt, who earned a Bronze Star for his actions on that day, and the other Marines who were out there are heroes to him as well.