Hero or terrorist? Base students host trial of Luke Skywalker with JAG help 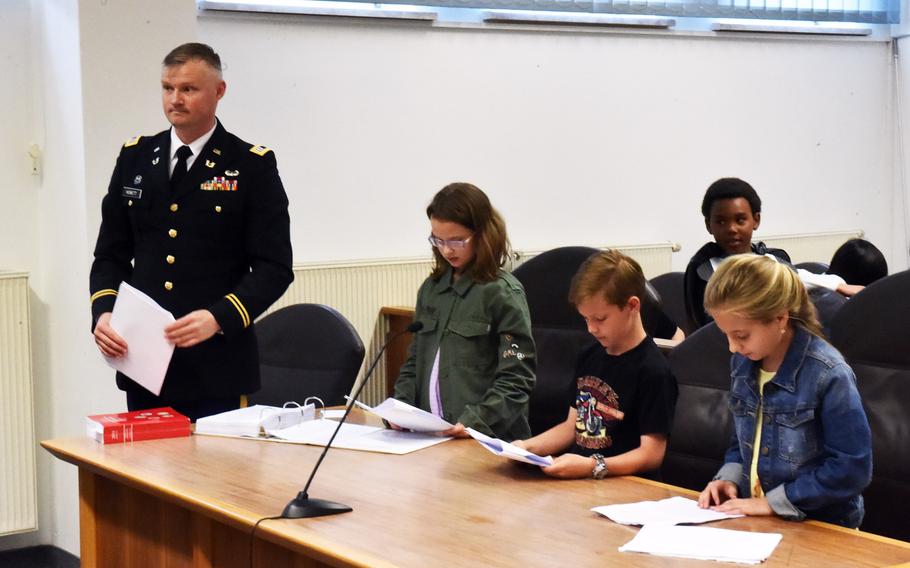 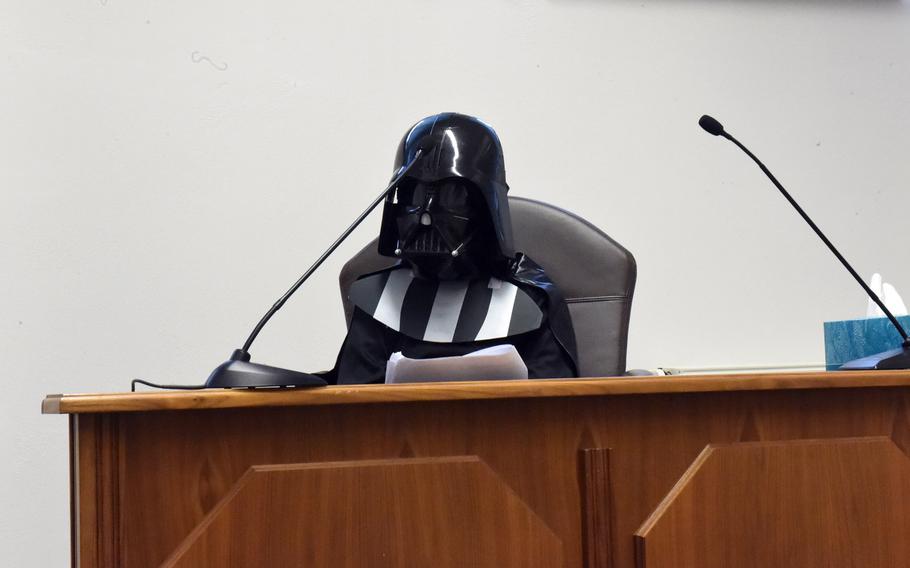 Buy Photo
Darth Vader, played by fourth-grader Xavier Maul, on the witness stand at a mock trial in Vilseck, Germany, Tuesday, May 1, 2018. (Martin Egnash/Stars and Stripes) 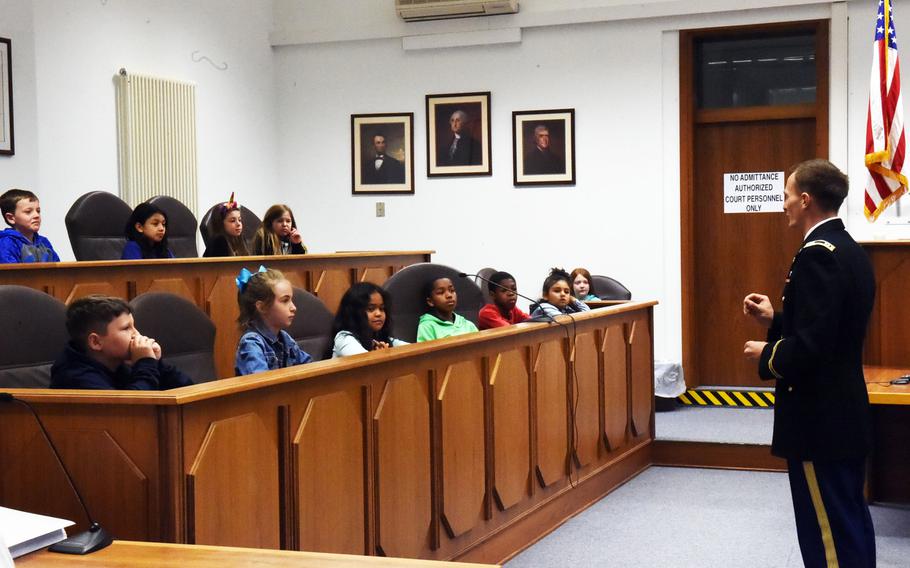 Buy Photo
Capt. Brett Grantham makes his opening remarks to the fourth-grade jury at the mock trial of Luke Skywalker, Tuesday, May 1, 2018, at Vilseck, Germany. (Martin Egnash/Stars and Stripes) 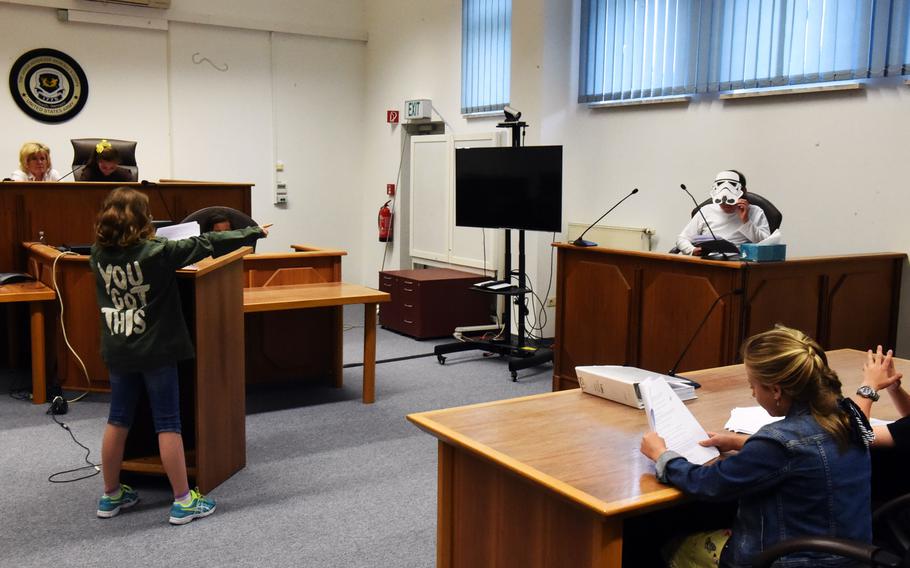 Buy Photo
A Stormtrooper, played by fourth-grader Bobby Silva, is cross-examined by the defense during the mock trial of Luke Skywalker in Vilseck, Germany, Tuesday, May 1, 2018. (Martin Egnash/Stars and Stripes) 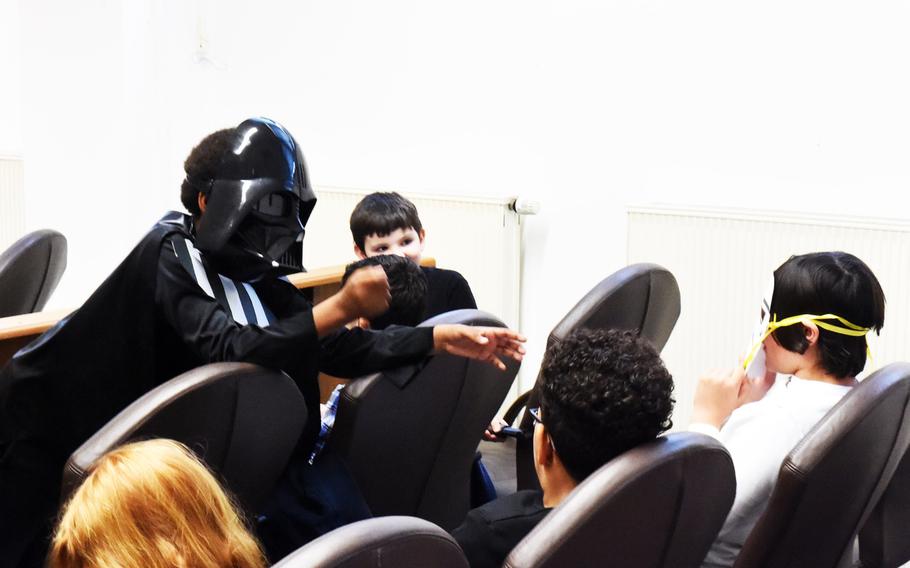 Buy Photo
Darth Vader, played by fourth-grader Xavier Maul, upset at the not guilty verdict against Luke Skywalker, attempts to force-choke the witnesses, at a mock trial in Vilseck, Germany, Tuesday, May 1, 2018. (Martin Egnash/Stars and Stripes)

VILSECK, Germany — In a courtroom far, far, away, Luke Skywalker was found not guilty of charges of galactic terrorism by United States Army Garrison Bavaria elementary school children during an educational trial on Tuesday. And later that day, "Star Wars" actor Mark Hamill tweeted his support for the effort.

"Many lives were saved," noted Hamill, who played Skywalker, in a tweet hashtagged #VictoryIsMineThanksToYOU.

The trial, part of the base’s “Law Day,” had two fourth-grade classes act as judges, lawyers and the jury in the trial of Skywalker. Base Judge Advocate General Corps lawyers assisted each side in making their case.

“The primary benefit is to give them an understanding of the American legal system of justice that may be different than what they see in the movies or on TV,” said Dr. Bill Hunter, the teacher in charge of the program. “This allowed students to experience the legal system in a way in which they can understand with characters that many of them already know.”

“I think this is a great opportunity for the kids to learn about how trials work, and what lawyers do. I mean, as a kid, how many chances to you ever get to talk to a lawyer and ask questions?” said Capt. Benjamin Hewett, the JAG representing Skywalker’s defense.

The trial began with the prosecution’s JAG, Capt. Brett Grantham, representing the Galactic Empire, telling the jury the horrors of what happened to the Death Star, and accusing Luke Skywalker of blowing it up, killing 5,999 “innocent stormtroopers.”

Among the prosecution’s witnesses were Emperor Palpatine, Darth Vader and the only stormtrooper who escaped the Death Star’s destruction, all played by fourth-graders.

Each witness identified Luke Skywalker, portrayed by fourth-grader Ethan Bettis, as the culprit responsible for the galactic base’s untimely demise.

However, the defense pointed out the difficulties of correctly identifying the pilot of a standard X-Wing Fighter spacecraft like the one flown by Skywalker, from miles away and when traveling at thousands of miles per hour.

“Isn’t it true that Rebel Alliance uniforms look similar to each other, and the X-wing was moving very fast,” the defense’s Mackenzie Peikert asked.

The defense looked like it could prove it would be impossible to tell who exactly piloted the X-wing fighter in question, until a shocking courtroom twist in the middle of the trial, when Skywalker admitted to blowing up the Death Star.

All seemed lost for the young rebel from Tatooine, until the defense switched tactics, to proving that blowing up the Death Star was actually the right thing to do.

Cross-examination of Darth Vader, portrayed by Xavier Maul, revealed to the jury that the Empire not only used the Death Star to blow up the peaceful planet of Alderaan, but also planned on possibly using the star base to vaporize more planets in the future.

This swung the jury in Luke Skywalker’s favor, and they agreed his actions were warranted. The death of the 5,999 stormtroopers, “though tragic,” paled in comparison to the millions of innocents silenced by the Death Star’s super-laser.

“During the course of the trial it became apparent that my client (Skywalker) would have to take the stand and explain his actions, and the jury responded well to that,” Hewett said.

This is the third year a trial like this has taken place to teach the kids on base about the legal system.

“They were excited that Luke Skywalker was found not guilty,” Hunter said. “They loved taking part in the trial. Even those students that were part of the audience enjoyed it.”