Herat, the mecca of Afghan culture 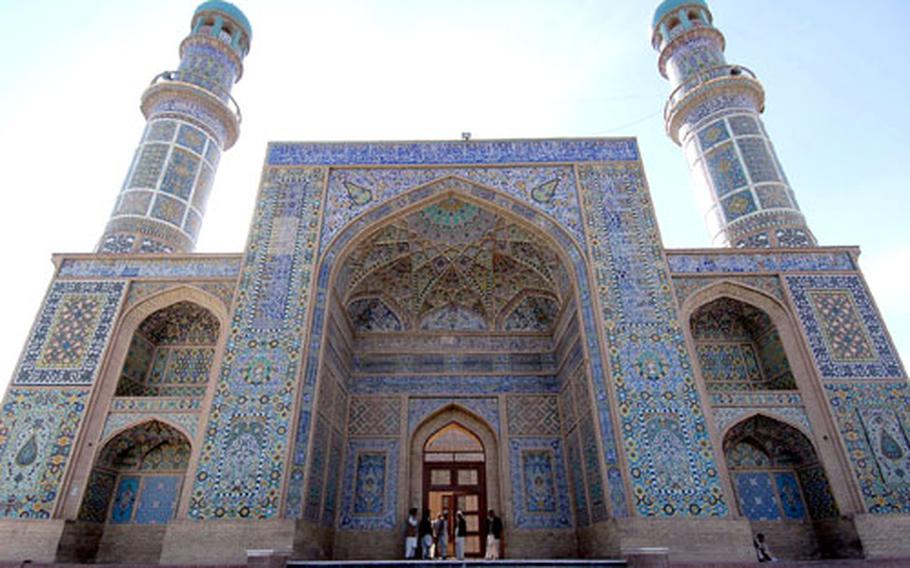 The Great Mosque of Herat, founded in 1200, is often called the Blue Mosque, because of its blue tiles. Herat, in western Afghanistan, is a cultural center of the country. (Michael Abrams / S&S)

HERAT, Afghanistan &#8212; If the Pentagon started to look for a rest-and-recuperation spot for its troops inside Afghanistan, it could do far worse than this large city near the Iranian border.

In other words, Herat doesn&#8217;t look like most of Afghanistan. It has modern buildings, paved streets and basic infrastructure. Its people, while approximating the cultural mix that makes up the country, seem a little different as well.

Much of Herat&#8217;s current success can be attributed to its geography. It&#8217;s located in a relatively flat area that sits on trade routes to Iran and Turkmenistan.

Though population estimates are difficult in Afghanistan, it&#8217;s acknowledged that the capital, Kabul, is the most populous city. It also has some modern buildings and the prestige of being the center of Afghan government.

A good portion of the city&#8217;s current success can also be attributed to Ismael Khan, formerly an autocratic ruler of the area who is now a minister in the federal government.

&#8220;You could say some other things about his rule, but he definitely got the roads fixed and city power here,&#8221; said Staff Sgt. Terry Welch, a public affairs officer serving his second stint in Herat.

Stansberry, who will soon be heading east to work on a new provincial reconstruction team at a yet-to-be disclosed location, said he can only hope that other areas of Afghanistan soon reach the level of relative prosperity that Herat enjoys.