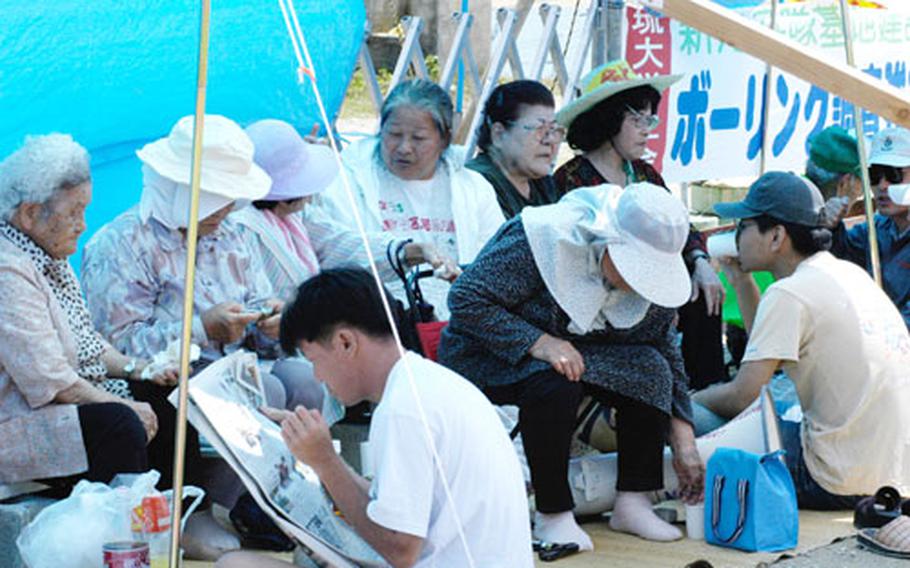 Encamped at the Henoko fishing port in opposition to an environmental survey for a new Marine air station, elderly residents and activists remained diligent at the site, vowing to prevent any work to begin. (Mark Rankin / S&S)

Encamped at the Henoko fishing port in opposition to an environmental survey for a new Marine air station, elderly residents and activists remained diligent at the site, vowing to prevent any work to begin. (Mark Rankin / S&S) 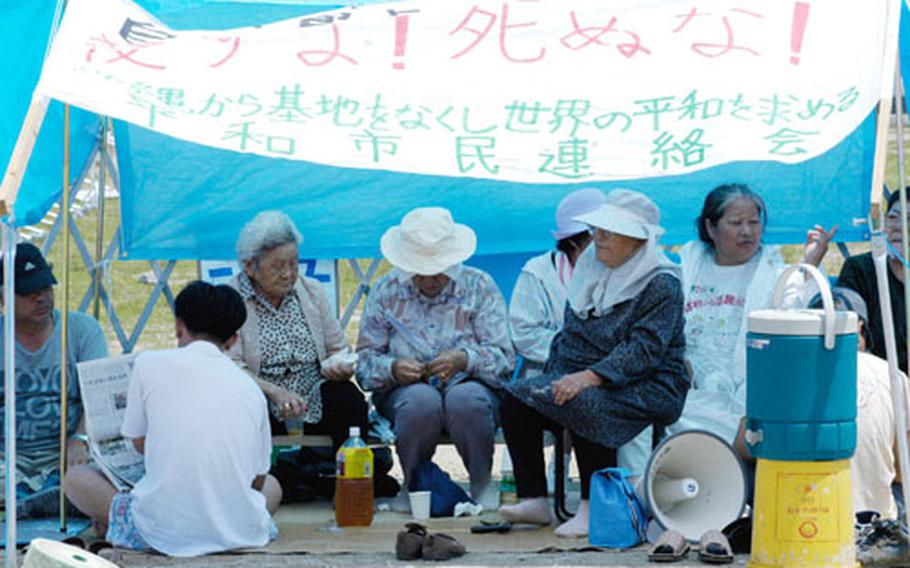 Encamped at the Henoko fishing port in opposition to an environmental survey for a new Marine air station, elderly residents and activists vow to prevent any environmental survey for the base. The banner reads: "Do Not Kill! Do Not Die! We demand the removal of all military bases from Okinawa and seek world peace. Peace Citizens Council." (Mark Rankin / S&S) 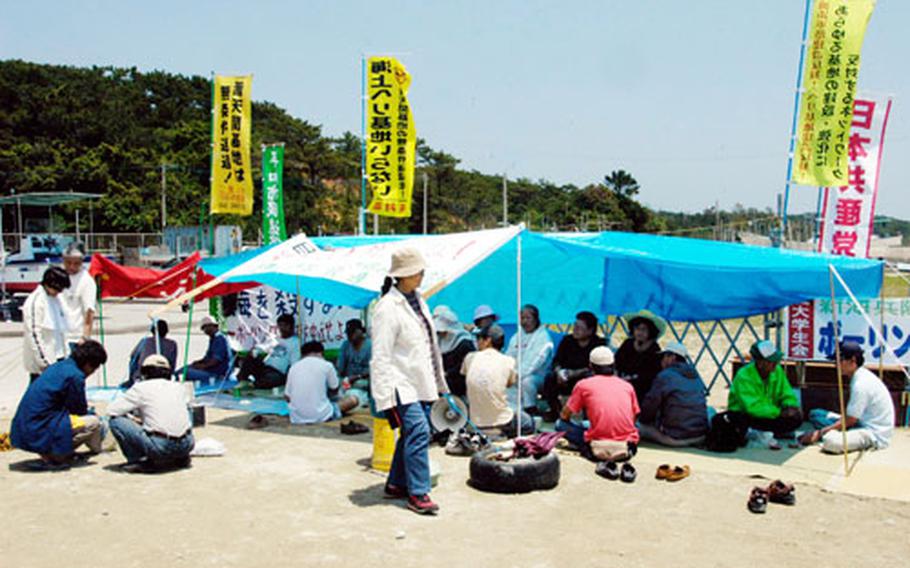 About 50 villiage residents and anti-base activists camped out at the Henoko fishing port in opposition to an environmental survey to build a new U.S. Marine air station. (Mark Rankin / S&S)

HENOKO, Okinawa &#8212; About 60 people opposed to building a new Marine air station in the waters just off the shore of this sleepy fishing village remained camped out Wednesday in a protest designed to thwart a planned environmental survey of the area.

They&#8217;ve been there for two weeks, preventing officials from the Naha Bureau of the Defense Facilities Administration from beginning a study of the seabed where the base is to be built.

Some of them, including a group of women in their late 80s and early 90s, say they will place their bodies in the way to prevent surveyors from conducting the underwater survey. On Tuesday, the protesters handed DFAB officials a petition containing more than 3,350 signatures they said were of people throughout Japan demanding the survey be halted.

The signatures were collected at the small encampment and through the Internet, said Etsuko Urashima, a protest organizer.

&#8220;We started this campaign April 16 and people who support us sent their signatures as a strong supporting message from around the country,&#8221; she told reporters at the site Tuesday.

In the meantime, the DFAB on Wednesday made its plans for the environmental assessment available for public review at several municipal halls throughout Okinawa. A DFAB spokesman said the plans will be on view until June 2.

However, the protesters want DFAB officials to give them a briefing at the port site on &#8220;what they are planning to do,&#8221; said the Dugong Network&#8217;s Takuma Higashionna, a signature drive organizer.

DFAB Naha officials accepted the petition and promised it would be forwarded to their superiors.

They then asked the protesters for permission to reinforce a fence erected April 19 to mark off a section of the port for equipment to support the survey.

The protesters had clashed with the contractors who put up the fence, forcing them to leave the area.

On Tuesday, they promised to repulse any efforts to reinforce the barricade.

While demonstrators surrounded the fence and about 10 police officers stood by, the defense agency officials negotiated with protest leaders. After an hour, the defense officials and workers left the area.

The new air station, to be built about two miles offshore on reclaimed land and a reef, would replace the Marine Corps Air Station at Futenma, in the middle of urban Ginowan in central Okinawa.

In 1996 the United States and Japan agreed to close MCAS Futenma as part of a plan to reduce by 21 percent the land area occupied by U.S. bases on Okinawa, which cover one-fifth of the island.

Two groups oppose the new facility, which would be connected by a causeway with the Marines&#8217; Camp Schwab in rural northern Okinawa.

Anti-base activists say the new base would cement the U.S. military presence on Okinawa for years to come and environmentalists say the construction would destroy the feeding ground of the rare dugong, a saltwater manatee.