Helping troops find peace of mind in a place of war 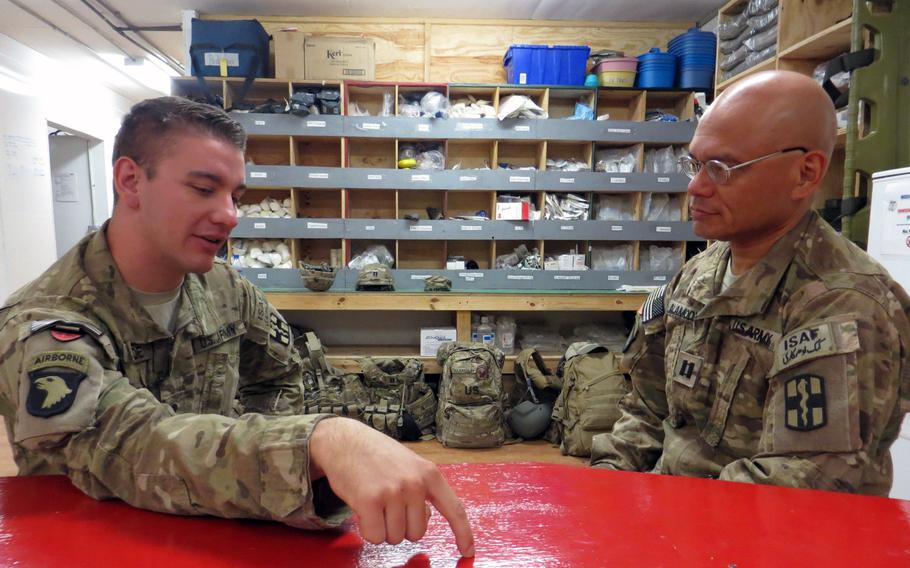 Capt. John Alamodin, right, a social worker with the 85th Medical Detachment, 1st Medical Brigade, talks with Spc. Paul Meade, a behavioral health technician with the unit, inside an aid station at Forward Operating Base Lightning in eastern Afghanistan. "You try to help (soldiers) in a way that allows them to stay focused," Alamodin said. (Martin Kuz/Special to Stars and Stripes)

GARDEZ CITY, Afghanistan — The senior medic found himself turning nauseous at the scent of blood. The young private slid into depression after his girlfriend in America dumped him. The first sergeant felt suffocated by memories of three close friends killed in Iraq.

Each man struggled alone until, heeding his inner voice or the less subtle advice of a concerned superior, he visited Capt. John Alamodin. A social worker stationed at Forward Operating Base Gardez in eastern Afghanistan’s Paktia province, Alamodin guided them as they searched for peace of mind in a place of war.

“Being deployed creates different kinds of stress for every soldier,” said Alamodin, who served with the 85th Medical Detachment, 1st Medical Brigade, during a nine-month tour that recently ended. “You try to help them in a way that allows them to stay focused.”

The Army released a behavioral health report last month showing a rise in morale and a decline in psychological problems among U.S. troops in Afghanistan. The experts who authored the review ascribed the changes largely to shorter tours and diminished combat action as the military prepares to withdraw most of its remaining forces by year’s end.

MORE: About our Present-Traumatic Stress series A less obvious influence cited in the study has been the work of behavioral health providers, whose presence has grown here even as the U.S. war effort winds down.

The Army deployed nine providers in 2005, four years after the first American troops arrived in Afghanistan to oust the Taliban. By last summer, the number had climbed to 114, including social workers, psychologists and psychiatrists. (The Air Force and Navy had 22 providers, compared with none in 2005.)

About 20 percent of the almost 3 million veterans of the Afghanistan and Iraq wars suffer from post-traumatic stress disorder or related conditions, the lingering fallout of two distant conflicts on America.

The increase in providers offers evidence of the Army’s slow awakening to a mental health crisis within its ranks and the need to counsel soldiers before they return home. The nascent awareness, if emerging too late to benefit those who served earlier in Afghanistan, portends a more informed approach to behavioral health for future generations of troops.

“By talking with soldiers on the ground, we have an opportunity to address issues now instead of letting things fester,” said Alamodin, 49, of Honolulu. “We know what can happen if they wait.”

Shadows of past tours

Sgt. Frederick Schrom landed in eastern Afghanistan last summer with a clear sense of war’s depredations. He had survived a punishing tour three years earlier in the southern province of Helmand, one of the country’s most violent areas.

As a field medic, Schrom tended to more than 200 American and Afghan soldiers, their bodies disfigured by bullets, mortars and rocket-propelled grenades. On other occasions, he was the patient. He sustained three concussions while riding in armored trucks that hit roadside bombs.

Schrom went back as a senior medic in charge of an aid station at FOB Gardez, less than 50 miles from the Pakistan border. By chance, he had deployed again to a province besieged by fighting. He expected to adapt as before.

Casualties flowed into the aid station from the start. A sergeant lost a leg after stepping on a bomb buried in the earth; mortar shrapnel tore open another soldier’s torso as he slept in his barracks. The war looked the same. What had changed was Schrom’s reaction.

In his worst moments, the dense, iron-tinged odor of blood struck like a punch. His stomach convulsed, bile scalding his throat as he swallowed back vomit. At night, images of the injured and dead wrenched him awake. Fatigue numbed his mind.

As weeks passed and the unease persisted, he sought relief at the base’s combat stress clinic, a plywood hut that housed Alamodin’s office. The small space doubled as a sanctuary. The two men met a handful of times, and with each discussion, Schrom felt less burdened, less adrift.

“When something severe happens — when you see someone who has been wounded or killed — it’s a painful reminder of how your life is in jeopardy out here,” said Schrom, 23, of Coeur d’Alene, Idaho.

“As a medic, you see that kind of thing constantly, and you have to figure out a way to keep doing your job, especially in a leadership position. Talking about some of those things with someone outside my unit helped clear my thoughts.”

Alamodin has the manner of an avid listener. Tall and thin, with a shaved head and silver-rimmed glasses, he possesses a calmness that invites others to fill silences. When he speaks, his tone is low and soothing, the voice of reassurance.

In more than two decades as a social worker, he has alternated between civilian and military practice, counseling couples and seniors, privates and colonels. Two years ago, intent on deploying, he joined the 85th Medical Detachment at Fort Hood in Texas. He hoped to prevent troops from imploding after war.

“I’ve seen the effects of PTSD on them and their families,” said Alamodin, who treated soldiers with combat-related trauma at the U.S. base. “I wanted to be involved on the front end to try to work through some of their problems here, which could help them with the transition when they go home.”

He circulated among a scattering of bases in Paktia province and found that, like Schrom, many soldiers fought shadows from past tours. He recalled his sessions with a sergeant whose return to combat rekindled anguish over the death of an Iraqi child a few years earlier.

During one conversation, Alamodin asked him to again recount his attempt to save the boy, who was severely wounded in a bomb explosion. The sergeant described his efforts to keep the child conscious and stop his bleeding. Retracing his actions, he exhumed a detail long buried in his memory. The boy had still been alive when the sergeant lifted him onto a medevac helicopter.

Pvt. Patrick Cervantes began to spiral because of a less harrowing, more common source of distress among soldiers in Afghanistan. His girlfriend in America had sent him a text message that read, in part, “I need space.”

Relationship strife ranks as the principal reason combat troops meet with behavioral health providers and chaplains. The high-tech bridge linking soldiers to loved ones creates equal potential to bond or quarrel across thousands of miles.

“In the past, when troops went to war, they were disconnected from everything,” said Alamodin, the divorced father of three preteen sons. “Now, with cell phones, Skype, Facebook, they can stay in touch with everyone, and that can add to their stress.”

Tension between Cervantes and his girlfriend had smoldered for a couple of weeks before she sent her text. In the ensuing days, his platoon sergeant noticed the private was withdrawn and distracted, and after learning the cause, he urged Cervantes to sit down with Alamodin. Their sessions over several weeks restored his emotional balance.

“I was able to get a better perspective on the whole situation,” said Cervantes, 20, of Wrightwood, Calif. “I realized that, right now, there isn’t anything I can do to magically fix things. I just need to concentrate on what I can control.”

The platoon sergeant’s support of Cervantes illuminates the evolving attitude of senior officers toward behavioral health services. The change, though gradual and inconsistent across the Army, suggests a deeper understanding of how mental trauma affects them as much as younger soldiers.

“I work with a lot of people who are on their third or fourth deployment,” Alamodin said. “They came up being told to keep things to themselves. But with the Army emphasizing behavioral health, more of them have started getting help.”

Dukes smothered his grief to finish the tour, and after returning home to Florida, he turned his mind to deploying to Afghanistan the following year. But with the end of that tour in 2010, and with no immediate prospect of a fourth, he had more time to brood. His life unspooled.

He lubricated his evenings with a 12-pack of beer, sometimes two. He argued with his wife over small matters, screamed at his two young children when they cried. On a family outing to Disney World, he scanned rooftops for snipers and looked for escape routes while grousing about the crowds.

His wife persuaded him to see a military therapist. Dukes shared little in their meetings and soon stopped attending. Another doctor prescribed sleeping and anti-anxiety medications. The drugs failed to relieve his symptoms or his anguish. As his outbursts intensified, his wife fled the house with their son and daughter for a week or two at a stretch.

“I was not easy to be around,” said Dukes, 37, of Leesburg, Ga. “There was a lot of anger, a lot of sadness, and I didn’t have a good way of dealing with those feelings.”

Last year, preparing for his second tour in Afghanistan, he worried in silence about his ability to cope in a combat setting. Not long after arriving in Paktia, he heard about Alamodin, and weary of fighting himself, he decided to give counseling another chance. Over the course of a dozen discussions, Dukes released his rage and sorrow and regret. He wept. He set down five years of pain.

“I feel lighter,” he said. “There are moments when I still feel bad because I think I could have done something, even though I wasn’t with those guys when they were killed. But mostly I think about the good times and how lucky I am that I knew them. I have a more positive outlook than I used to.”

His family sensed the difference from half a world away when they talked by phone or Skype. His darkness had lifted; they grew closer despite the distance. In his wife’s voice, he heard compassion. In his children’s laughter, he heard redemption.

“They tell their mom, ‘Dad seems happier,’” Dukes said. His eyes welled up. “That’s a big thing for me.”