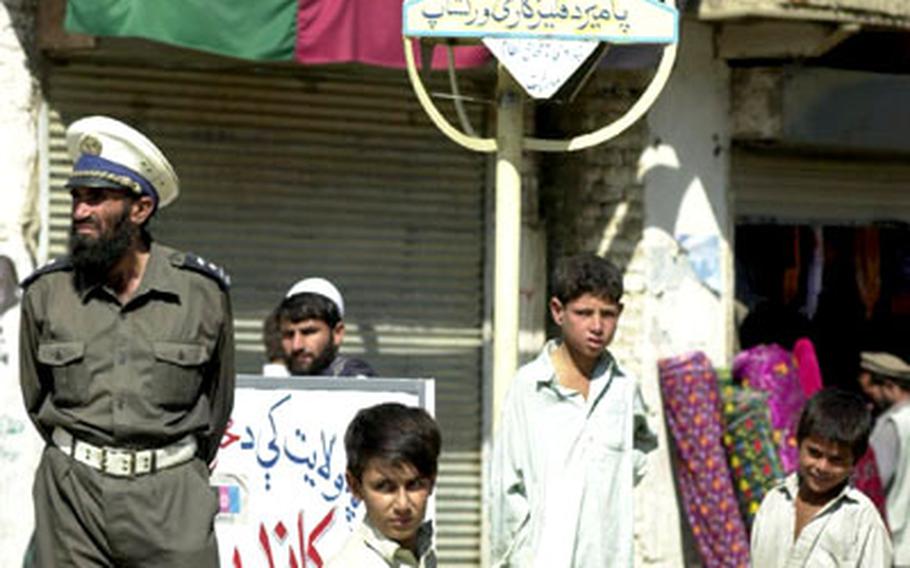 With elections, growing stability and more visible governmental authority on the streets, something like normalcy is the rule in Afghanistan, even in towns such as Asadabad, just a few miles from the Pakistan border. (Terry Boyd / S&S)

With elections, growing stability and more visible governmental authority on the streets, something like normalcy is the rule in Afghanistan, even in towns such as Asadabad, just a few miles from the Pakistan border. (Terry Boyd / S&S) 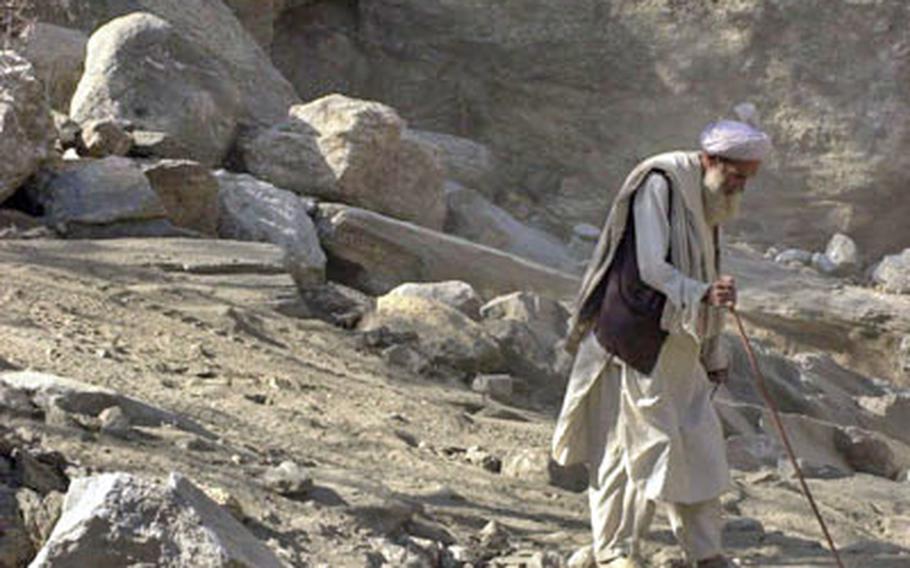 Afghanistan, with its legendarily inaccessible terrain, remained unconquered for 5,000 years. But the isolation also means that there are not even the most basic of modern conveniences. Soldiers and civilians involved in rebuilding the nation say the U.S. led coalition and government must start major projects, such as roadbuilding, to ensure the nation&#39;s stability. (Terry Boyd / S&S) 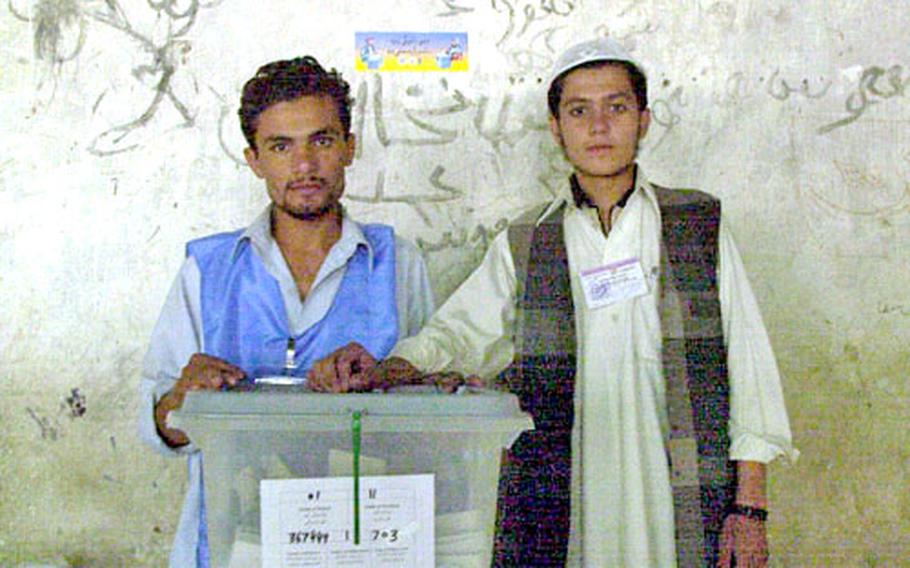 Two election officials pose for a picture last Saturday in Asadabad during the nation&#39;s historic election. With voting going off with little violence and no deaths, U.S. reconstruction officials are hoping to start more ambitious projects beyond schools. (Terry Boyd / S&S)

ASADABAD FIREBASE, Afghanistan &#8212; With the first Afghan presidential election complete, the effort to extend the power of the central government may have reached the tipping point.

Now the challenge is to help the Afghans build a society worth fighting for, said Capt. William Boyd, engineer with a Provincial Reconstruction Team.

Sending 20,000 U.S. soldiers to rid &#8220;every nook and cave&#8221; of Taliban, militants and renegade warlords is impractical, Boyd said. But the U.S. military can defeat the bad guys by empowering the Afghans, he said.

Winning may hinge on the kind of power that comes not from the barrel of a gun, but from a wall socket.

At the dedication of a recently completed project, Afghanistan&#8217;s education minister joked how great Americans are at building schools, but added they had been taking forever to build the hydroelectric plant, Boyd said of the minister&#8217;s comments.

PRT officials had civilian contractors assess what it would take to boost a facility near Asadabad from its current 12 percent capacity to full power. But the $6.7 million price tag is far beyond the PRT&#8217;s $25,000 limit from the Commander&#8217;s Emergency Relief Program or the regional commander&#8217;s $200,000 limit.

&#8220;Right now, we don&#8217;t have that kind of money,&#8221; Boyd said, adding that it could take months for the bidding process, something the Afghans interpret as lack of American commitment.

In this new phase, limited U.S. resources are running up against Afghanistan&#8217;s unlimited needs and high expectations.

Even in eastern Afghanistan&#8217;s Kunar province, one of the more remote and unstable areas, the guarded consensus among U.S. soldiers and civilians is that the insurgency is waning. That said, they say this unconventional war may demand an unconventional definition of victory.

It&#8217;s unrealistic to expect Afghanistan to transform itself overnight into a liberal, Western-style society, they say.

Afghans still must be introduced to the most fundamental procedures of modern society, such as paying utility bills, Boyd said. The most realistic outcome the U.S. military can hope for is that Afghanistan isn&#8217;t going to harbor terrorists such as Osama bin Laden, he and others said.

Even with the trend toward stability, it&#8217;s still possible that Afghanistan could sink back into chaos.

Rebuilding Afghanistan has two enemies at this point, said a U.S. official: &#8220;The warlords and our own bureaucracy.&#8221;

Bureaucrats are &#8220;worried about a few coins falling off the cart&#8221; in inefficiently spent funds, said the official, speaking on condition of anonymity. But failure to finance infrastructure projects now could lead to big problems down the road, he said.

Three years after Sept. 11, 2001, bin Laden is still out there, but the Taliban are long out of power and there are signs of hope.

The turnout for the presidential election was heavy and voting took place in a mostly peaceful environment.

In a meeting Monday with U.S. officials at Firebase Asadabad, one local leader compared Afghanistan&#8217;s first election to Eid, the end of Ramadan fasting and a time of celebration and feasting.

Local leaders regularly come to the Asadabad base, seeking help with projects and leaving detailed intelligence about local corruption and Taliban sympathizers &#8212; some of whom are still in power &#8212; with U.S. officials.

Perhaps 80 percent of the people support the new Afghanistan, Boyd said, adding that Kunar province could become a model for all of Afghanistan.

He sees plenty of tangible improvements, such as water distribution, new schools and hospitals. But the U.S. military has reached a critical juncture: the hydroelectric dam.

&#8220;We need to bring a TVA to the Kunar Valley,&#8221; said Maj. John Wilt, PRT team leader, referring to the Tennessee Valley Authority, a Franklin D. Roosevelt-era project that brought electricity to rural sections of Tennessee and Kentucky.

The Afghans themselves are conscious of falling behind their regional rivals, Pakistan and India, during years of Soviet domination, followed by civil war, soldiers and civilians said.

Afghanistan has abundant natural resources, including natural gas, strategic mineral reserves and jewels. But there is no way to transport cargo, Boyd said, noting roads are so bad it takes about six hours to drive 60 miles to Jalalabad from Asadabad.

Increasing security is allowing aid organizations such as the U.S. Agency for International Development and the United Nations to start building roads and power plants. At the same time, PRTs across Afghanistan are creating police stations and governmental offices at the district level, said Boyd. Those offices could help measure victory.

The question now becomes how long the U.S. presence will be necessary, and most soldiers and civilian government officials believe a realistic estimate is two decades.

But with elections behind them, PRT officials believe the Taliban have lost the initiative to U.S. policymakers, who they believe can shorten that stay with a full commitment.