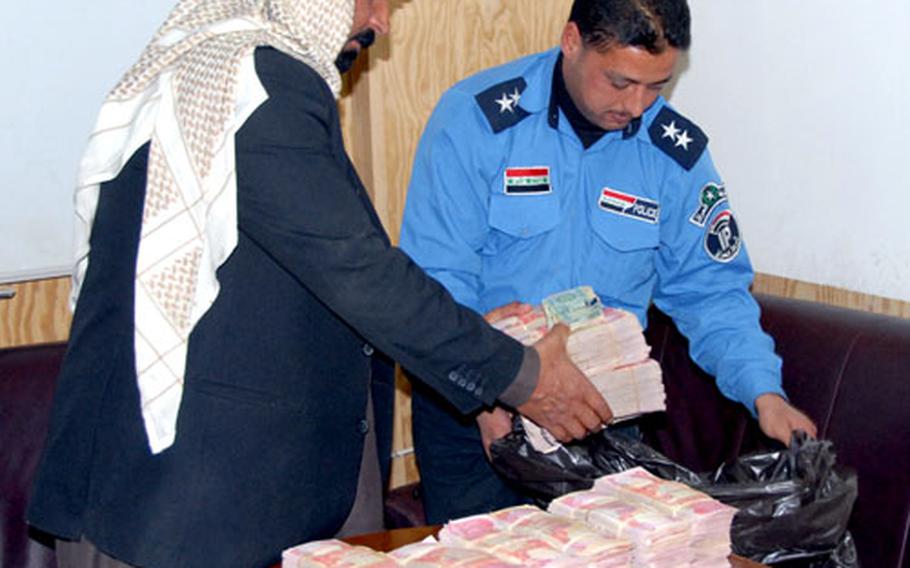 Sheik Mohammed Farhan Al-Hayis, president of the Jazeera Council, puts about $250,000 worth of dinars into a garbage bag. The money is for renovation projects that the council will be in charge of prioritizing. (Megan McCloskey / S&S)

FORWARD OPERATING BASE BLUE DIAMOND, Iraq &#8212; With 10 members, the discussion among the sheiks at their second meeting was how to break a tie vote.

But the president&#8217;s brother shook his head, arguing instead for an odd-numbered group.

Such are the trials of grass-roots democracy.

The civil affairs team with Task Force 2-37 recently gathered the sheiks of Jazeera &#8212; a sprawling area just north of Ramadi proper &#8212; to set up what amounts to a city council.

That type of an organized local governing body has not existed before in this area.

&#8220;There was no representation in the area other than the security forces,&#8221; said Capt. Chad Pillai, a civil affairs officer with 2nd Battalion, 37th Armored Regiment.

The Jazeera Council, which will be focused for now on prioritizing reconstruction projects, was formed in early December.

Now it&#8217;s a matter of teaching the sheiks, who lived under a suffocating dictatorship for decades, how to be democratic.

At the latest meeting, which focused on the mechanics of the council and how everything would work, the sheiks insisted at first that a tie-breaking procedure wouldn&#8217;t be necessary. Their decisions would always be unanimous.

Horst said he explained resources are limited and there&#8217;s not enough to satisfy everybody&#8217;s needs.

The job of the civil affairs officers is basically to be a diplomat, eating goat and drinking chai tea with the sheiks, but in this case it&#8217;s also to be a coach.

Pillai said he gave the sheiks books in Arabic on the U.S. government and its history, which they were eager to read.

Last week, there was another engagement with the council&#8217;s president, Sheik Mohammed Farhan Al-Hayis.

The meeting took place in a small, locked room. The sheik sat slouched low on a brown leather couch opposite three members of the civil affairs team. Two Iraqi engineers were at the side of the table sitting on another couch near an interpreter, who fidgeted and gestured often with her hands.

But really the money was for payments on two bridges, a community center, a school and a water treatment facility. And the civil affairs team was hammering out the details with the sheik of how future projects will be handled, such as the bidding process.

Basically it was a discussion on how to make sure the council is considered legitimate.

Pillai explained that the system needs to be fair and transparent.

In the beginning, the council will handle 10 reconstruction projects every two weeks. The money for each project, from both coalition forces and the Iraqi government, is controlled by the council. They decide how it&#8217;s going to be spent.

The civil affairs team stressed that the rules of the bidding process need to be decided up front and then made readily available to the public.

Pillai told the sheik that being a Jazeera company, with local workers, should be part of the criteria for bidding on a project.

&#8220;It&#8217;s important for the Jazeera Council that people see that the council is providing opportunities for its people,&#8221; Pillai said.

The civil affairs team talked about the importance of not accepting bribes and instructed that anyone who offered one would lose their privileges to bid on projects.

&#8220;Take this information and make sure the other members of the council understand the process,&#8221; Horst said as the meeting wrapped up.

Emphasizing the importance of getting the process right, Pillai told the sheik the council will be the model for the region, saying &#8220;all the procedures that you develop are going to be copied all over Ramadi and Anbar.&#8221;

The ins and outs of the Jazeera Council

The Jazeera Council, though similar to a city council, is not an elected body.

It consists of the head sheiks in the area.

&#8220;Keeping in mind everything is still tribal centric, we formed it around the tribes,&#8221; Army Capt. Chad Pillai said.

A sheik is selected to become leader of the tribe by a vote among his fellow sheiks, so there is some sort of election process, Pillai said.

The president of the council, Sheik Mohammed Farhan Al-Hayis, said having all sheiks on the council will be readily accepted by Jazeera residents.

Right now the council meets at a private home, but eventually it will gather at one of the new government centers in the works for Jazeera.