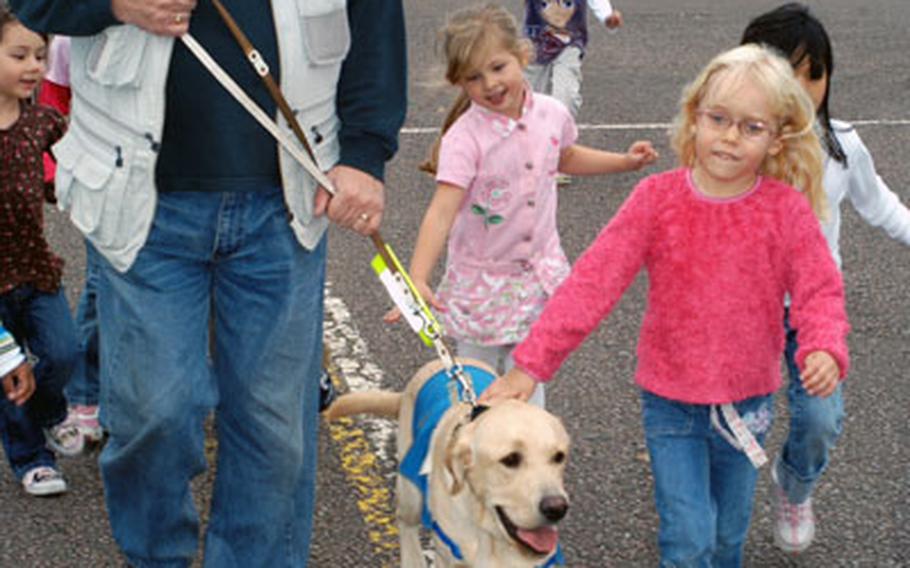 Nine times out of 10, when a dog meets children, it&#8217;ll turn into a love fest full of petting, squeals of excitement and an overall good time.

So was the situation earlier this month at Lakenheath Elementary School when Rocky came to visit.

But this wasn&#8217;t just a schmooze fest. Rocky got his name from kids at the school, and the Labrador-golden retriever mix is about to start training to be a Seeing Eye dog.

For seven years now, Lakenheath Elementary students have sponsored pups that are on their way to becoming Seeing Eye dogs.

They get to name the pooches and receive visits and updates on how the training is going.

All told, more than $60,000 has been raised through the school in recent years for those who get these dogs ready to help people in need.

&#8220;We kind of equate the dog with [the kids] and the growing and learning process,&#8221; said Anne Marks, a teacher at the school when the program started. &#8220;We wanted to do something that is of a caring nature, so they can see how nice and good it is to help others.&#8221;

October is guide-dog awareness month at the school, and students have received visits by the dogs while also learning about the dogs&#8217; jobs and about those who rely on them, Marks said.

In the past, students have visited dog- training centers, learned about the working life of the animals and were blindfolded to see what it&#8217;s like to rely on a Seeing Eye dog.

As the pups go through their 20 months of training, classes receive letters and photos updating how their dogs are doing, Marks said.

Rocky just left for training in Scotland, where he&#8217;ll be for about 10 months, she said.

The first year of a Seeing Eye dog&#8217;s life is &#8220;a relatively normal puppyhood,&#8221; according to Andy Gatenby, a trainer who has visited the school with the dogs.

Then the dogs are gradually exposed to the environments they&#8217;ll have to work in, including navigating heavy traffic, busy shopping centers and elevators, he said.

After about eight months, the support is phased out and the dogs learn to work without constant guidance and support.

Aside from the financial donations the school has provided, Gatenby said the visits to the school are beneficial for kids and canines alike.

And as the kids scramble to pet the visiting puppy, that also helps the dog with its future job, he said.

And these lessons seem to be rubbing off on the kids involved.