Helicopter flight paths to be reviewed at MCAS Futenma 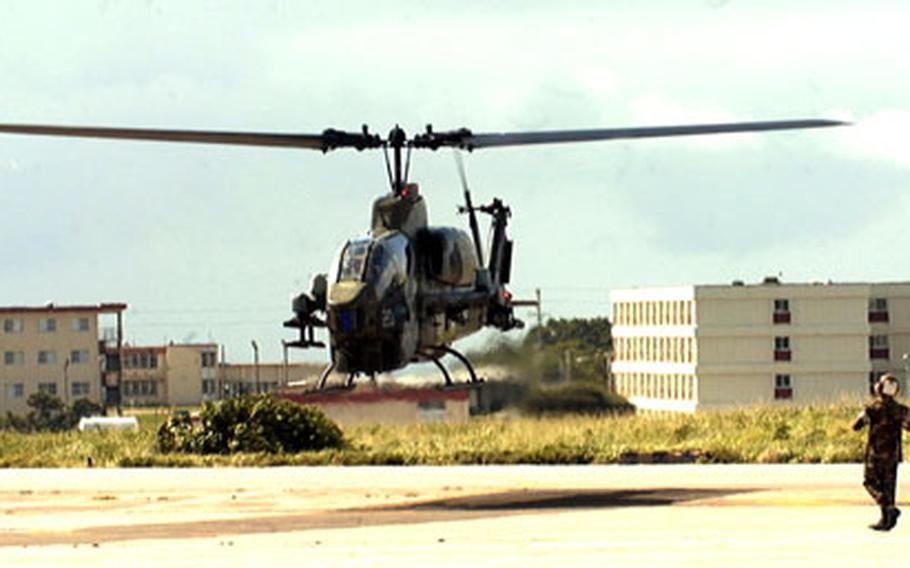 An AH-1W Cobra is directed in for a landing at Marine Corps Air Station Futenma on Okinawa. (S&S photo)

An official on Okinawa said Thursday that a team will review helicopter flight paths at Marine Corps Air Station Futenma.

&#8220;The U.S. military and Japanese government have agreed to set up a joint team to study the possibility of altering helicopter flight paths at Futenma air station,&#8221; Yuji Miyamoto, the Ministry of Foreign Affairs&#8217; ambassador in charge of Okinawan affairs said Thursday during a regular press conference.

&#8220;Although the exact date is yet to be settled, according to an advice made by the accident subcommittee, a joint team, which would mainly be led by the Defense Facilities Administration Agency, would be set up, within a week or 10 days,&#8221; he said.

&#8220;From the perspective of ensuring safety, we will participate in the discussion,&#8221; he said.

The accident subcommittee was formed by the U.S.-Japan Joint Committee in the wake of the Aug. 13 crash of a Marine helicopter on a university campus adjacent to the airfield. The Joint Committee recently adopted guidelines suggested by the subcommittee for the joint handling of crash scenes that occur outside U.S. bases.

Miyamoto said the ministry had no plans to request the Marines suspend flight activities until the flight routes have been altered.

MCAS Futenma lies in the heart of the city of Ginowan and any alternate flight path would still have to be made over developed neighborhoods.