Tech. Sgt. Heath Culbertson, of the 83rd Expeditionary Rescue Squadron, shows where a bullet entered his helmet during a mission to recover the pilots of a downed Army helicopter on April 23 in Afghanistan. Culbertson was uninjured. (Erick Saks/U.S. Air Force)

Tech. Sgt. Heath Culbertson, of the 83rd Expeditionary Rescue Squadron, shows where a bullet entered his helmet during a mission to recover the pilots of a downed Army helicopter on April 23 in Afghanistan. Culbertson was uninjured. (Erick Saks/U.S. Air Force) 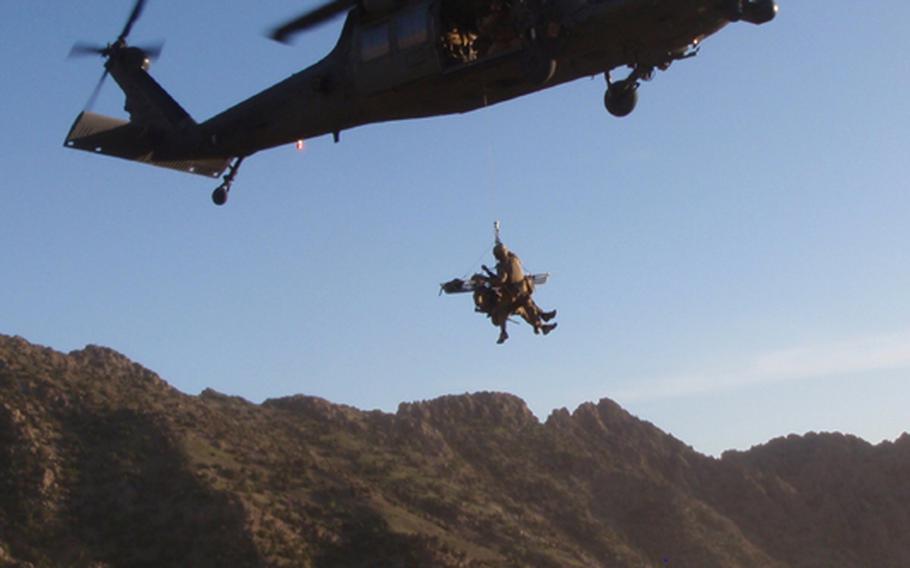 Maj. Jesse Peterson and Tech. Sgt. Shane Hargis, of the 83rd Expeditionary Rescue Squadron, practice a hoist mission on April 22, the day before they were called upon to recover the pilots of a downed Army helicopter in Afghanistan. (Bill Cenna/U.S. Air Force) 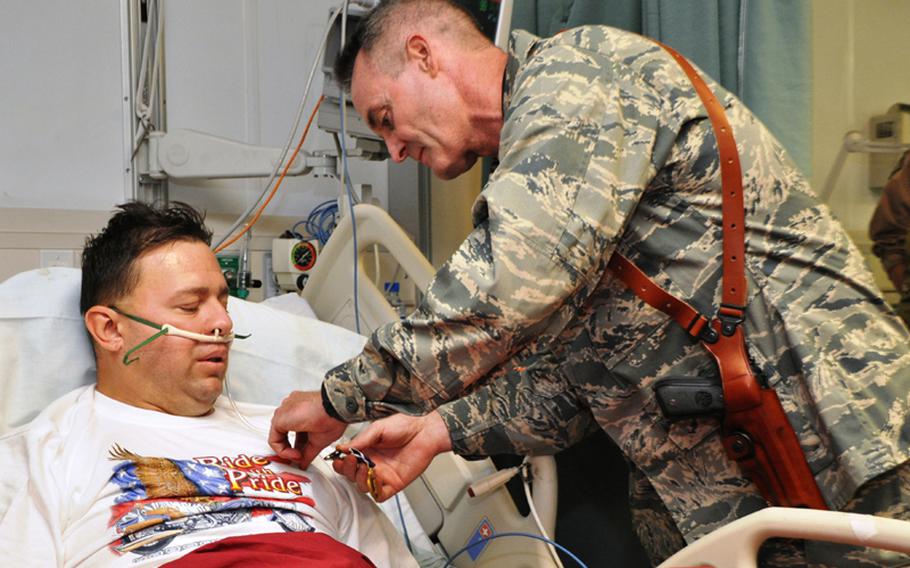 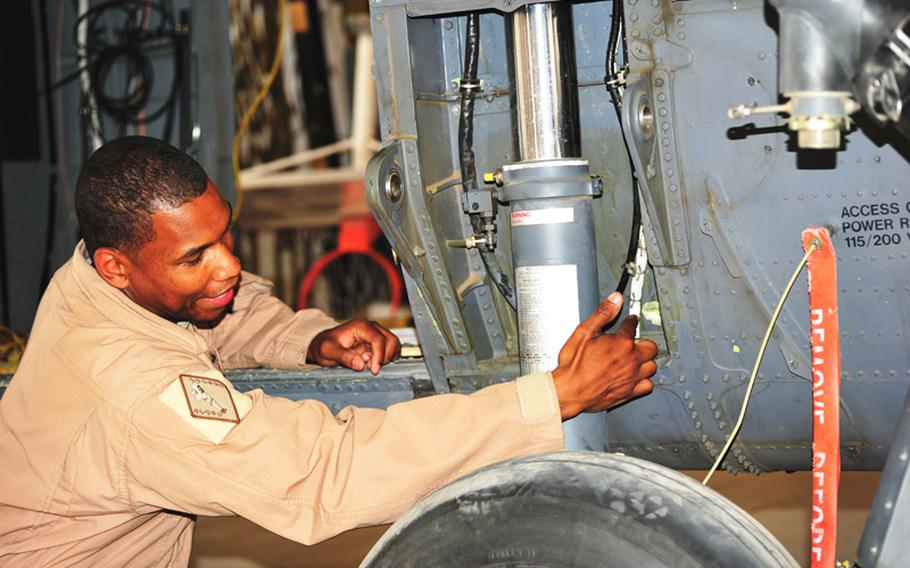 Staff Sgt. William Gonzalez, of the 83rd Expeditionary Rescue Squadron, points out bullet holes in the side of the HH-60G Pave Hawk that he flew in during a mission to rescue downed Army helicopter pilots on April 23 in Afghanistan. (Erick Saks/U.S. Air Force) 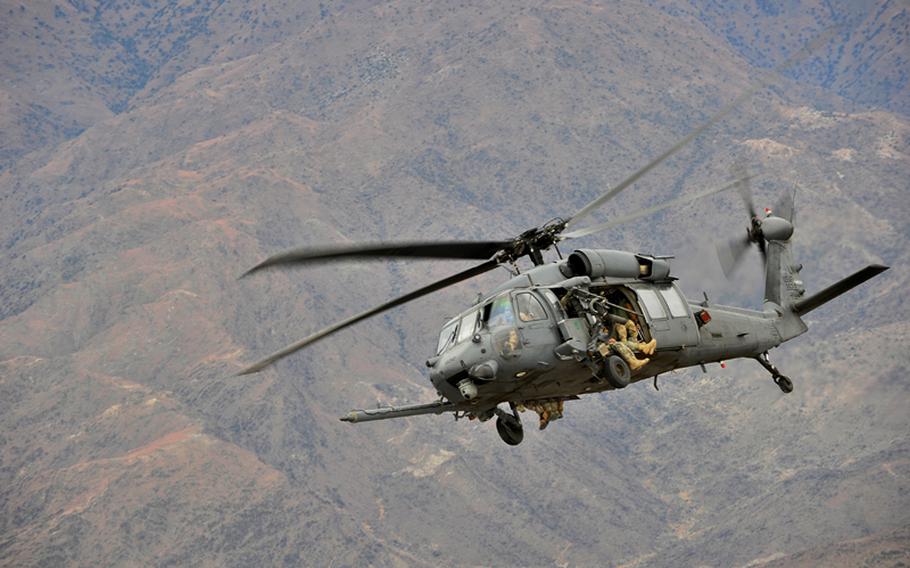 Pilots and crewmembers deployed with the 83rd Expeditionary Rescue Squadron at Bagram Air Field put themselves in harm&rsquo;s way repeatedly throughout the day. And two of the squadron&rsquo;s pararescue jumpers, known as PJs, hunkered down under a fusillade of incoming fire on the ground, calling in air support on enemy forces that got as close as 50 yards.

Several men involved in the mission &mdash; deployed from the 33rd Rescue Squadron on Kadena Air Base, Okinawa, and the 212th Rescue Squadron from Joint Base Elmendorf-Richardson, Alaska &mdash; spoke to Stars and Stripes via phone to describe their efforts to recover the pilots: one alive and one killed in the crash. Officials say the helicopter &ldquo;went down due to an undetermined cause,&rdquo; and the accident remains under investigation.

The sun was just beginning to peek over the horizon on April 23 when two HH-60G Pave Hawk helicopters flew into the roughly mile-wide valley, with extremely steep mountain slopes, in search of the downed helicopter. Linking up with other air support, they spotted one of the pilots a few hundred yards up the mountain from his crashed aircraft.

The second helicopter lowered a three-person rescue team &mdash; Maj. Jesse Peterson, Tech. Sgt. Chris Uriarte and Tech. Sgt. Shane Hargis &mdash; down with a hoist. Once on the ground, they learned that the body of the other pilot was still with the wreckage.

They began prepping the first pilot for rescue while Bryant&rsquo;s crew dropped Staff Sgts. Zachary Kline and Bill Cenna at the crash site.

Bryant said it&rsquo;s preferable &mdash; and much quicker &mdash; to land and debark the teams, but the unforgiving terrain made that impossible. He was forced to hover at about 180 feet, much higher than the normal 40-foot hoist, while his two rescuemen were lowered to the ground.

Cenna described the spot as &ldquo;rugged, unforgiving, very steep.&rdquo; He and Kline found the dead pilot with the wreckage and began preparing for an extraction.

About that time, with Bryant&rsquo;s helo hovering overhead like a sitting duck, the enemy opened up with &ldquo;very effective fire from multiple ... locations,&rdquo; Cenna said.

Under the roar and rush of the helicopter blades, the pilots and crew said they heard the very distinct sound of gunfire. Bryant pulled back quickly to get out of harm&rsquo;s way.

Staff Sgt. William Gonzalez, a door gunner in that sitting duck, said the first thing that went through his mind when he realized they were taking fire was &ldquo;Am I hit, am I not hit?&rdquo; Next up, &ldquo;Where&rsquo;s [the fire] coming from.&rdquo;

He was scanning the ground for enemy when Tech. Sgt. James Davis called out that he had been hit.

Gonzalez turned around and saw Davis slumped in the seat, drenched in blood. He told the pilots he was leaving his spot on the gun and began first aid.

&ldquo;I just tried to find where the wound was,&rdquo; he said.

Gonzalez placed a tourniquet on Davis&rsquo; leg above the wound to stop the bleeding as the crew raced to get him back to Bagram. While refueling, they woke Tech. Sgt. Heath Culbertson, who replaced Davis on the crew. The helicopter was headed back to the crash site within minutes.

&ldquo;We can&rsquo;t do anything from Bagram,&rdquo; Gonzalez said. &ldquo;We&rsquo;ve still got our ... PJs on the ground, we still got a job to do.&rdquo;

The crew of the second helicopter began putting rounds on hard-to-spot enemy positions on the ground, using tracer rounds coming at them as a guide. Heavy fire was coming from a location between the two teams of pararescue jumpers, so getting them together for one rescue was out of the question.

The crew decided to pull out the surviving pilot and their three personnel first. The pilot was in the hoist and the team was giving the hand signal to lift him when the enemy opened fire again.

Senior Airman Michael Price, flight engineer and hoist operator, hit the &ldquo;shear switch,&rdquo; cutting the cable so the pilot on the ground wouldn&rsquo;t be dragged across the cliffs as the helicopter pulled out to evade the attack.

With no room for a normal landing, and no hoist cable, the pilots decided to come around again and use a method that they practice for mountainous extractions: a one-wheel touchdown, keeping the helo in a hover while pulling everyone aboard.

&ldquo;The best option we had was to put one wheel down on a bigger boulder,&rdquo; explained co-pilot 1st Lt. Elliott Milliken. &ldquo;It&rsquo;s not the easiest thing to do.&rdquo;

That allowed them to get low enough that the terrain protected them from the incoming fire. The pilot and pararescue jumpers scrambled aboard.

They were hit again by a barrage of bullets as they pulled out. Low on fuel, they flew to a nearby forward operating base where they discovered that the incoming fire had caused more damage than originally thought.

They had lost nearly all their transmission fluid and the helo had to be grounded. Milliken hopped another flight back to Bagram so he could pick up their spare HH-60 and more pararescue jumpers for firepower.

Kline and Cenna, meanwhile, continued to coordinate with other aircraft &mdash; including A-10s, Apaches and Kiowas &mdash; while pinned down on the ground.

&ldquo;We would tell them what was going on and then they would coordinate with me to try and come in and suppress the threat,&rdquo; Kline said.

Pilots dropped ordnance as close as 75 yards from his position, Kline said.

He added that the enemy forces would target them every 15 to 20 minutes throughout the day.

&ldquo;There [were] rounds going off, the dirt and dust was flying up,&rdquo; Cenna said. &ldquo;I still do not know how we were not hit.&rdquo;

At one point, the enemy gunfire blasted the downed helicopter, lighting it on fire. Cenna and Kline scrambled away as far as they could while dodging bullets. The helicopter exploded, and they were close enough that Kline later found molten metal that had landed in his gear.

As the battle ensued, the Army inserted a quick-reaction force nearby to assist Kline and Cenna, but the team was immediately hit. One soldier was instantly killed and another wounded. Both of the squadron Pave Hawks were on their way back to the area when they got the call that they were needed to medevac the wounded soldier.

The landing zone near the Army troops was extremely dangerous, Bryant explained, with heavy fire coming from all directions and hanging wire that they had to avoid clipping with their rotor blades.

As Bryant tried to maneuver the Pave Hawk under the wire, his door gunner, Gonzalez, saw the reaction force unloading on a building.

He called out &ldquo;gunfire on the left,&rdquo; asked the pilots to climb a bit, and let loose with his .50 caliber machine gun.

Knowing the wounded soldier was quickly bleeding out, the pilots made three attempts to land, but got &ldquo;shot out&rdquo; of the landing zone each time, Bryant said.

Finally, &ldquo;both Apaches rolled into [the area] ... and released a lot of ordnance,&rdquo; Bryant said. Milliken&rsquo;s crew finally maneuvered past the wire, squeezed into the small landing zone, and saved the soldier. But it was anything but easy.

&ldquo;It was pretty hairy,&rdquo; said Price, the flight engineer. &ldquo;We ended up having to do a two-wheel hover off of that one.&rdquo;

With the wounded soldier safely en route for care, Bryant and his crew headed back to Kline and Cenna for another attempt.

By this time, the rescue jumpers had been on the ground and under fire for about five hours. Kline said he didn&rsquo;t realize that it had been that long.

&ldquo;It could have been an hour for all I knew,&rdquo; he said. &ldquo;Everything happened pretty fast and there was a lot going on all the time.&rdquo;

Kline said they were sure they wouldn&rsquo;t get out during daylight and were saving ammo for nightfall and the possibility that they would be overrun.

Bryant came into hover and started lowering the hoist.

That&rsquo;s when the crew realized that one of the enemy rounds had damaged the helo, and the hoist was on a back-up system that meant it moved much slower than normal.

&ldquo;It felt like a long time that we were sitting there [hovering],&rdquo; Bryant explained.

But the expected gunfire never came, and they were finally able to pull everyone into the helicopter.

Kline and Cenna stressed that they never entertained the idea of leaving the fallen pilot behind.