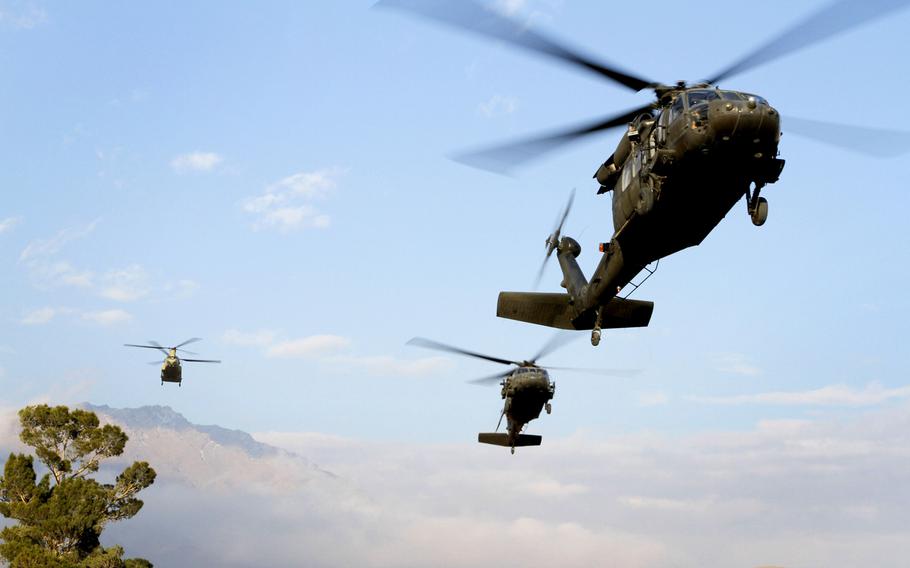 KABUL — Six U.S. servicemembers were killed Tuesday when their helicopter crashed in southern Afghanistan; one American on board survived, U.S. defense officials said.

The International Security Assistance Force did not release the names or nationalities of the casualties pending notification of their families. But in Washington, a U.S. defense official said all the victims were Americans.

The official said there was one survivor who was injured in the Black Hawk UH-60 crash. The injured survivor is an American.

Investigators have not determined the cause of the crash, but ISAF said initial reports indicated there was no enemy activity in the area.

Malik Ali Mohammad, district governor of Shahjoi district in southern Zabul province, said an aircraft crashed there at 2 p.m. Tuesday. ISAF officials would not confirm the location of the crash.

The crash brings the total number of ISAF deaths in Afghanistan to more than 150 this year, according to iCasualties.org. It marks the deadliest day for coalition forces in Afghanistan since seven Georgian soldiers were killed in a suicide bombing in Helmand province on June 6.

Afghanistan has long been known as a difficult place for pilots to navigate due to its rugged high-altitude terrain. At least 180 aircraft are reported to have crashed or been destroyed during the 12-year war, according to civil aviation safety statistics and published reports on military crashes.

Accidents caused the vast majority of the crashes, and military helicopters belonging to the NATO-led coalition accounted for most of the overall losses. Helicopters are widely used in Afghanistan as inter-theater transports due to the threat posed by roadside bombs and land mines and because the mountainous country lacks modern roads.

In April, there was a series of crashes: A civilian cargo plane crashed in eastern Afghanistan, killing seven civilians; four airmen were killed in the crash of an MC-12 twin-turboprop aircraft, also in Shahjoi district; and on April 3, an F-16 fighter-bomber crashed about 10 miles south of Bagram Air Field, killing the pilot.

In March, two helicopters crashed within a week. The pilot of an OH-58 Kiowa helicopter died when the chopper crashed in Kandahar province. A Black Hawk crashed outside Kandahar city, killing five U.S. servicemembers.

In all of those instances, the NATO-led coalition said no enemy activity was reported.

Additionally, in May a KC-135 tanker aircraft supporting operations in Afghanistan crashed in nearby Kyrgyzstan.

In February, a U.S. helicopter went down in eastern Kapisa province. Coalition officials said no one was seriously injured in that incident, for which the Taliban claimed responsibility. It, too, was under investigation.

Jon Harper reported from Washington. Josh Smith, Alex Pena and Heath Druzin contributed to this report, as did Zubair Babakarkhail and The Associated Press.