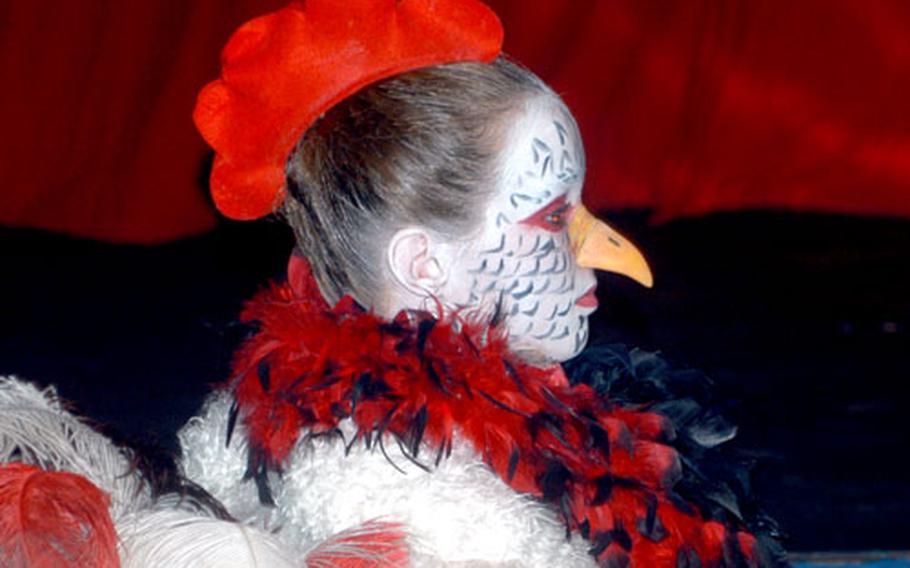 Elena Fritz drew praise from critics for her portrayal of “Rooster” in the Razz-Ma-Tazz Family Theater’s production of “The Musicians of Bremen.” (Nancy Montgomery / S&S)

HEIDELBERG, Germany &#8212; The comedy writer from Chicago was the toughest.

Nancy Beckett, a writer for the legendary Second City theater, didn&#8217;t pull her punches just because she was critiquing a group from Ramstein Air Base.

Razz-Ma-Tazz Family Theater had just sung and danced for 55 minutes in a production about four dim but kindly animals &#8212; a donkey, dog, cat and rooster &#8212; who join up to become singers in Bremen, and on the way there, get the best of their four dim but nasty human masters.

But, she said, the production values were high, the makeup impressive. Overall, she said, she wasn&#8217;t crazy about the play.

&#8220;Speaking of physicality &#8212; what an incredibly physical performance!&#8221; said Morrie Enders, artistic director of the Kalamazoo Civic Theatre. &#8220;It just kept coming and coming and oozing out. Boom! Just tons of energy! So much power coming from these people!&#8221;

It was the third critique the trio had given Saturday during a marathon day of 10 one-act plays put on by community theater groups from U.S. military bases throughout Europe at Heidelberg&#8217;s Roadside Theater.

The festival is an annual event hosted by the European Installation Management Agency&#8217;s Morale Welfare and Recreation, which funds the local community theater groups.

The festival, although it provides a couple of days of free, live theater to the public, is really designed to train local actors, directors, lighting designers and all the other volunteers who compose most local theater troupes.

The three top shows &#8212; as judged by Beckett, McBride and Enders, after a secret ballot before they&#8217;re allowed any discussion of the relative merits of the plays &#8212; are recognized. The first-place show gets a chance to compete against those from other regions in the American Association of Community Theater next June in Charlotte, N.C.

There are also awards in acting categories, as well as makeup and other special categories. The winner in the best director category gets two airline tickets to London.

Enders, who has come to the festival as a judge four times, said he sees less competitive jealousy among the military groups than civilian counterparts in the U.S.

&#8220;The folks here really enjoy their theater and they milk every last bit of goodness from the experience.&#8221;