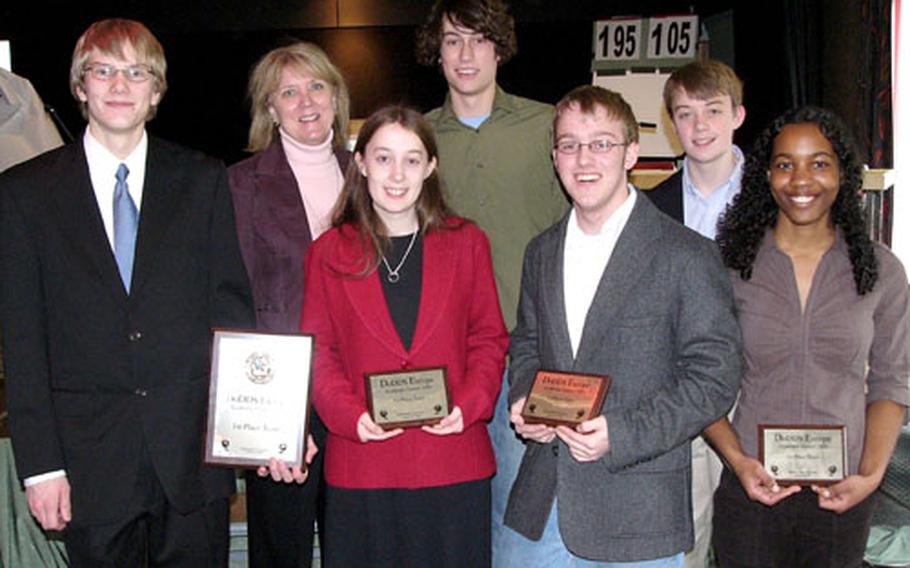 HAMBACHTAL, Germany &#8212; A five-student team from Heidelberg which covered all the bases supplanted four-time king Ramstein on Friday as winners of the annual DODDS-Europe Academic Games.

Completing an unbeaten run through the 23rd annual edition of this two-day event were senior Megan Bryan, the team captain participating in her third Academic Games; senior Phil Cotter, a second-year participant; junior Adam Lawrence, who was a member of the W&#252;rzburg team in 2005; sophomore Kailan Sierra-Davidson; and freshman Randall Bryan.

&#8220;This is the greatest team I&#8217;ve ever had,&#8221; Heidelberg coach Karen Primmer said after the seventh squad she has taken to the event downed Kaiserslautern 195-105 in the championship game.

The Academic Games are a quiz-format contest in which two teams attempt to be quicker than the other in answering 40 10-point questions covering all academic areas. Twenty-one schools ranging from Iceland to Bahrain spent the first day in pool play, with the top two teams from each of the four pools advancing to a double-elimination round.

Heidelberg reached the championship game Friday morning with a 145-105 victory over Kaiserslautern in the winners-bracket final, then downed the Red Raiders again in the title game.

As a consolation, the K-town team of Joshua Eklund, Tim Bailey, Mary Shoup, John Frank and Britini Van DeLinde took home the distinction of ending Ramstein&#8217;s four-year reign. Cast into the losers-bracket on Thursday night by Sigonella, Ramstein rebounded with an elimination-game victory over Aviano before taking on K-town.

With K-town trailing 120-40 at halftime during the championship game against Heidelberg, Eklund came up with four straight correct answers after the break to close his team&#8217;s gap to 120-80.

Against Heidelberg&#8217;s generalists, however, K-town could come no closer.

Bryan, who also praised her team&#8217;s chemistry, usually handled art and literature questions herself for the Lions, who last won this event in the 1980s.

Heidelberg&#8217;s Lawrence said his team received a boost when K-town, instead of Ramstein, turned up in the title game.

For his part, Heidelberg&#8217;s Cotter talked about what might have been.

Whomever the foe, Primmer was full of praise for her team.