Heidelberg: Racecar driver wannabes can rev it up at German track 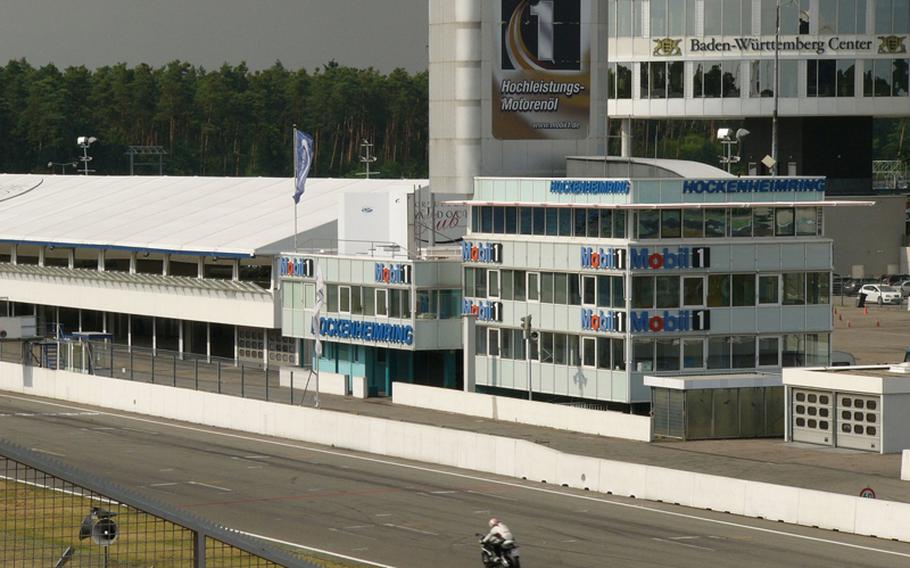 A lone biker tests his machine on Germany's Hockenheimring earlier this month. The track's 'Tourist-Rides' program permits evening visitors to test their own cars and motorcycles, and skills, on the track. (Rusty Bryan/Stars and Stripes)

A lone biker tests his machine on Germany's Hockenheimring earlier this month. The track's 'Tourist-Rides' program permits evening visitors to test their own cars and motorcycles, and skills, on the track. (Rusty Bryan/Stars and Stripes) 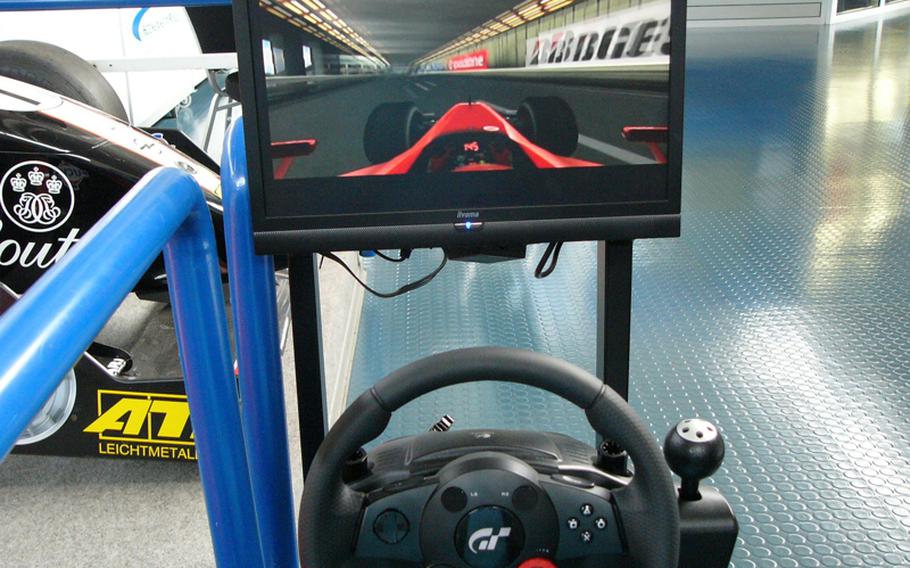 A racer enters the tunnel at Monte Carlo on one of four Formula 1 driving simulators available free of charge at the Hockenheimring Motor-Sport-Museum. (Rusty Bryan/Stars and Stripes) 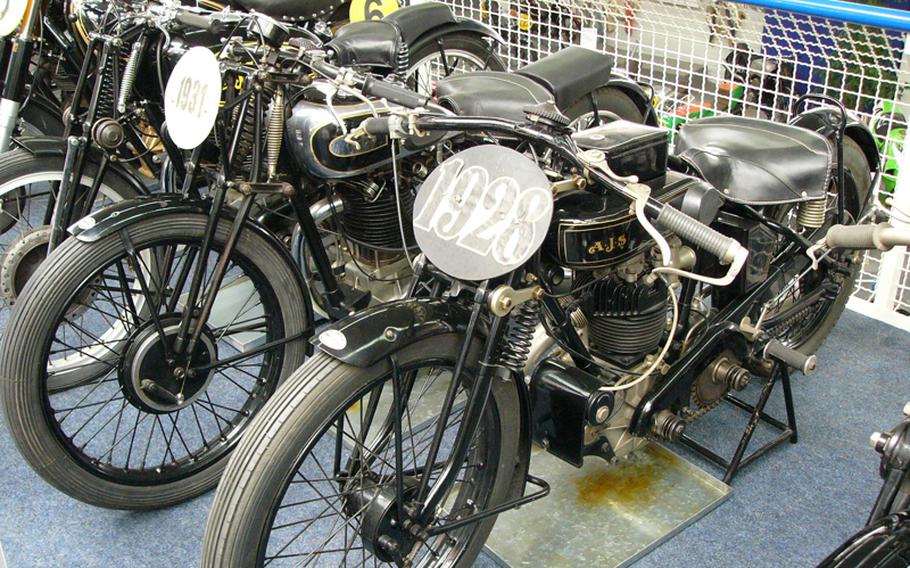 A 1928 AJS motorcycle, right, drips oil waiting for the next time it will be taken for a spin at the Hockenheimring. (Rusty Bryan/Stars and Stripes) 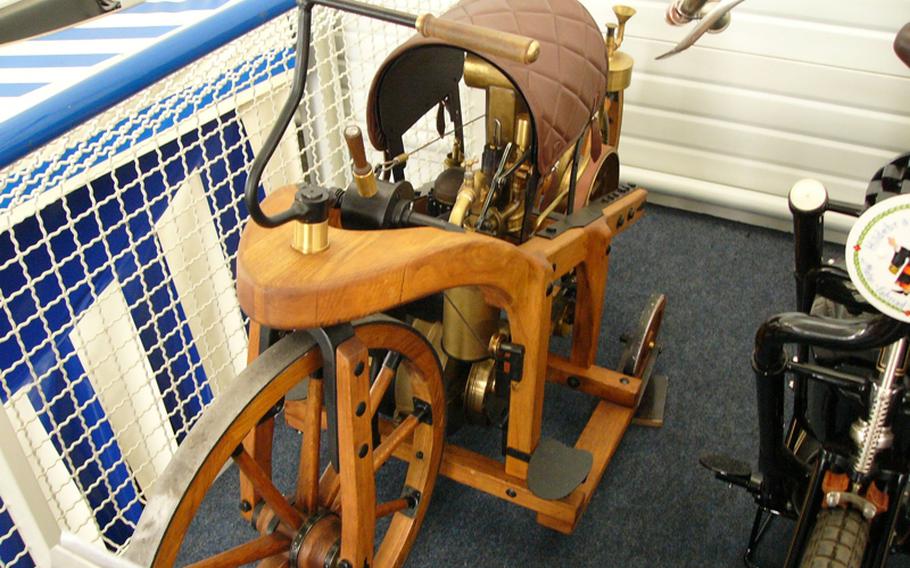 When it comes to a &ldquo;quick trip,&rdquo; few places are more appropriate than Germany&rsquo;s Hockenheimring track, where driving speeds on the straights exceed 200 mph.

The professional drivers on the Formula 1 circuit just showed how fast the track could be at last weekend&rsquo;s German Grand Prix at the complex just off the autobahn south of Heidelberg&rsquo;s Patrick Henry Village. Even if you don&rsquo;t want to take a turn behind the wheel, there&rsquo;s plenty to see and do here.

If you have a yen for excitement and the scratch to pony up some serious euros, you can start with the track itself.

Want to put your car and your skills through the hairpin Sachs curve and the other storied features of a big-time European F-1 circuit? For a fee of 12 euros per 15 minutes, you can drive your motorcycle or car around the track every evening. Track officials call these &ldquo;Tourist Rides.&rdquo; Keep your mufflers on, however. There&rsquo;s a 90-decibel limit.

Don&rsquo;t want to risk your own bodywork, axles or front-ends? For 229 euros, a professional driver will load you into your choice of a Porsche GT3 or Mercedes SLK 350 and subject you to the G-forces for three laps around the GP circuit.

For 20 euros more, you can choose a Radical SR3 class C sports car. Or for 199 euros, you can ride in a KTM X-Bow racer. Whichever you choose, this is called a &ldquo;Race Taxi,&rdquo; and the fee covers the rental of a helmet and fireproof hood and insurance.

Want to experience some rubber-burning power slides? The 229-euro &ldquo;Drift Taxi&rdquo; lets you ride along as a professional driver slides through the circuit&rsquo;s curves faster than you&rsquo;d ever want to do it in your own car.

Then there&rsquo;s the big one, perfect for anyone planning a second career &mdash; three courses of instruction at the Formula 1 driving school. You&rsquo;ll pay for your thrills behind the wheel of a Formula Opel-Lotus, but thrills there&rsquo;ll be. The three-hour &ldquo;first-steps&rdquo; course is 579 euros, the five-hour &ldquo;basic&rdquo; class is 998 and the 10-hour &ldquo;premium&rdquo; class is 1,795, and you&rsquo;ll have to supply your own champagne to spray exuberantly when you complete the sessions.

If you&rsquo;re more a looker than a doer, check out the museum and the daily Insider&rsquo;s Tour. The 90-minute tour takes visitors to the track, pits, control tower and private boxes. Included in the museum&rsquo;s modest admission fee are access to four free driving simulators and a chance to examine a part of the history of motor racing at the ring.

Although the museum is far less elaborate than similar exhibits at the nearby technical museums at Speyer and Sinsheim, motorcycle enthusiasts in particular will enjoy the scores of historic bikes on display.

That&rsquo;s an understandable emphasis; the track began as a motorcycle circuit, and racing bikes from the early part of the last century to today&rsquo;s superbikes are cheek-by-jowl on two levels. All the major former and present marques are on display &mdash; Norton, NSU, BMW, Ducati, Triumph, Kawasaki, Aprilla, Honda &mdash; you name it. All are in working order and come out a few times a year for a run on the track. Next outing for the old-timers is Sept. 25-26.

The racing cars include a funny-car dragster, touring and sports cars and open-wheel formula racers. Plenty to bring back the memories and fill a day at the track.

Directions: Hockenheimring is easily accessible off Autobahns 5, 61 and 6. Follow the exits for Hockenheim, located just south of Heidelberg. Once off the autobahn, continue following the Hockenheimring logos, then turn into the grounds at the sign marked &ldquo;Hotel&rdquo; and &ldquo;Museum.&rdquo; Parking is free.

Times: The Motor-Sport-Museum is open 10 a.m. to 5 p.m. daily. The &ldquo;Insider Tours&rdquo; of track and facilities is at 11 a.m. daily (in German, but most track employees are fluent in English.) Tourist rides are 7-8 p.m. daily.

Food: The track hotel serves a lunchtime buffet in a restaurant overlooking the racetrack from noon to 2 p.m. daily for 8.50 euros per person. A la carte and vegetarian items also available; call 06205-2980 for reservations. In addition, the town of Hockenheim next to the complex offers a full selection of restaurants, food kiosks, bistros, pizzerias and the like.

Information: Find contact information and details on the driving experiences, including go-karts, at www.hockenheimring.net; it has an English version, so language won&rsquo;t be a problem. Coming up with the euros, however, might be. Its telephone number is 06205-950212.