Heidelberg library to close during makeover 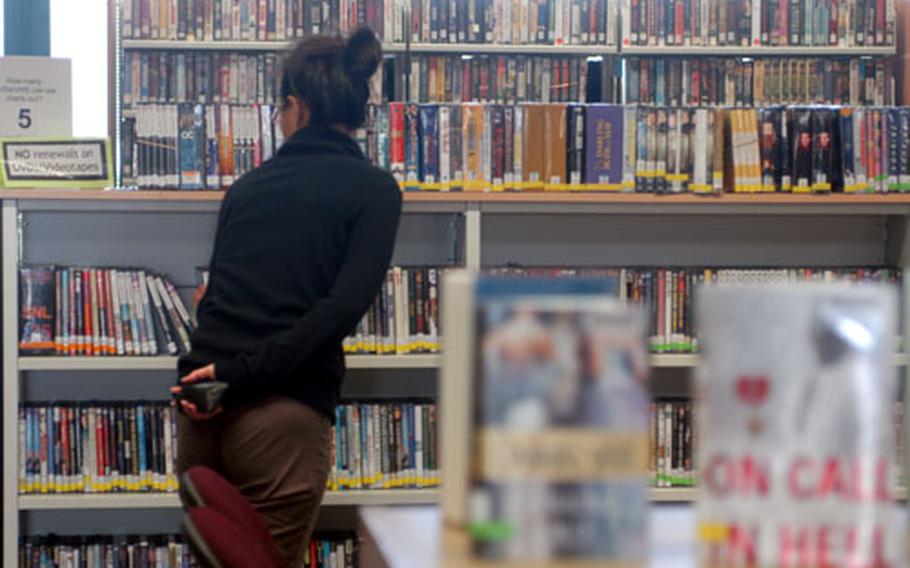 A patron of the Patrick Henry Village library looks through the DVD collection, where cinephiles can find an eclectic collection including classics like "The Red Shoes," 1960s comedies with Doris Day and Rock Hudson, and miniseries from the British Broadcasting Company. (Nancy Montgomery / S&S)

HEIDELBERG, Germany &#8212; After years of genteel shabbiness and despite funding shortfalls throughout the Army&#8217;s European garrisons, the library on Patrick Henry Village is about to get a little makeover.

Starting soon &#8212; possibly at the end of the month &#8212; the only place on U.S. Army Garrison Heidelberg to offer free use of children&#8217;s books, new literary fiction and a quirky assortment of DVDs will be temporarily closed.

Thirty-five days after the renovation begins, according to plan, the library will reopen with new carpeting, freshly painted walls and new air conditioning. Exact dates are expected to be announced March 26.

The cost of the work is estimated at $80,000, according to a U.S. Garrison Heidelberg spokeswoman.

The project was approved recently, apparently after a safety report sent up the chain of command mentioned problems with the building.

Part of the floor had &#8220;kind of caved in,&#8221; said Michelle Crewson, public services librarian, and the old industrial gray carpet was taped down in spots.

The renovation will fix the floor and replace the carpet with a cornflower blue, beige and burgundy carpet, Crewson said. Stark white walls are to be painted a warmer beige, with new trim to match the carpet.

It will be the library&#8217;s first renovation in some time.

The library will be closed for what&#8217;s expected to be a little more than a month because all the books have to be moved for the work to be done. Crewson said the German company doing the work has divided the task into seven sections, allotting five days to each section.

The work has been delayed from its original start date because the carpet, bought from a German company but apparently coming from the United States, did not arrive.

The library has 7,479 registered borrowers, according to library records, out of the 16,600 people in U.S Army Garrison Heidelberg. During the renovation, patrons are being directed to either the regional library on Mark Twain Village &#8212; which emphasizes research materials over fiction and children&#8217;s books, Crewson said &#8212; and the library on Sullivan Barracks in Mannheim, which is more like the Patrick Henry Village library.

The project is a victory for library users at a time other projects are delayed indefinitely because of funding shortfalls.

For example, the library will be able to store materials across the street in what was a TGI Friday&#8217;s that closed in January. Garrison officials said they planned to open another restaurant, probably a Winger&#8217;s, in March. But that project has been put on hold.

The plans for the former restaurant were unavailable Friday, U.S. Garrison Heidelberg officials said, because it was a training holiday and those with information about the restaurant were not available.