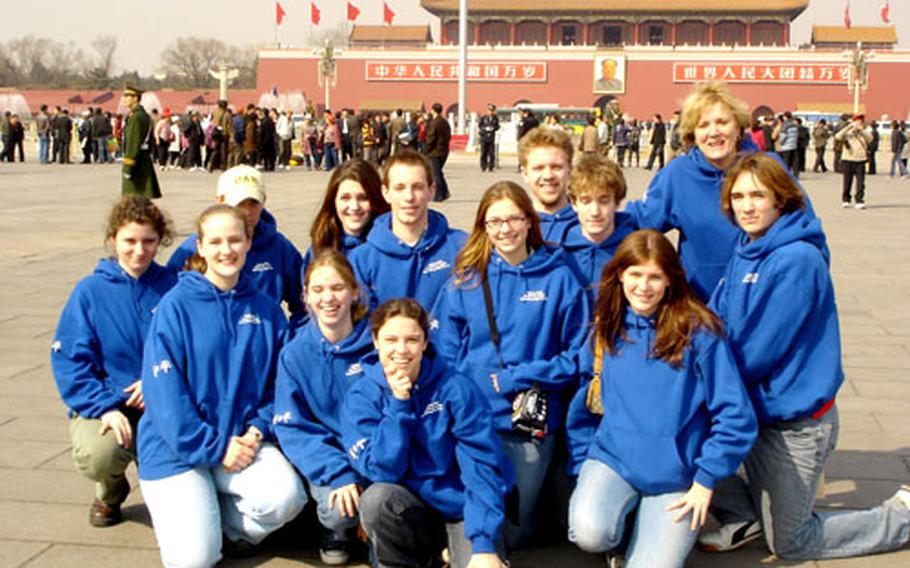 Heidelberg High School seniors Brian Mueller and Katie MacEwen have attended a combined 22 Model United Nations conferences, but they agree they saved the best one for last.

She said the conference was better &#8220;not only because it was in Beijing, but because it had a more international feeling&#8221; than MUN conferences in Europe.

The Beijing experience was the first for a Department of Defense Dependents School-Europe school, said Primmer, who, during her four years as the team&#8217;s sponsor, has taken delegations to conferences in The Hague, Netherlands, Dublin, Ireland, and several sites in Germany.

&#8220;We were the only [Department of Defense Dependents Schools Activity] school invited to Beijing,&#8221; Primmer said she was told by conference director.

She said Dennis Boyles-Wood of the Bejing International School told her the school was invited because of the performances by past Heidelberg teams at the model U.N. sessions in The Hague each January.

Mueller attributed the extra time to the smaller size of the Beijing event. While 4,000 attend The Hague conference, just 700 were invited to China.

Heidelberg&#8217;s delegates represented Belgium, Uzbekistan and Thailand in Beijing. Primmer said that more than half of the team&#8217;s 12 resolutions, which covered issues as diverse as international terrorism, the purpose and structure of a U.N. mission to Iraq, and implementation of the land-mine treaty, passed.

Mueller, MacEwan and Primmer all said they were indelibly affected by their pioneering trip.

&#8220;It was eye-opening, seeing firsthand a totally different type of government and society,&#8221; said Mueller, who has attended 14 MUN events, including the one in China, during his four years at Heidelberg.

MacEwen, who was assigned to an MUN class when the journalism class she had picked closed, said her experiences as a delegate &#8220;have inspired me to major in international relations.&#8221;