Heidelberg Hospital to convert to clinic 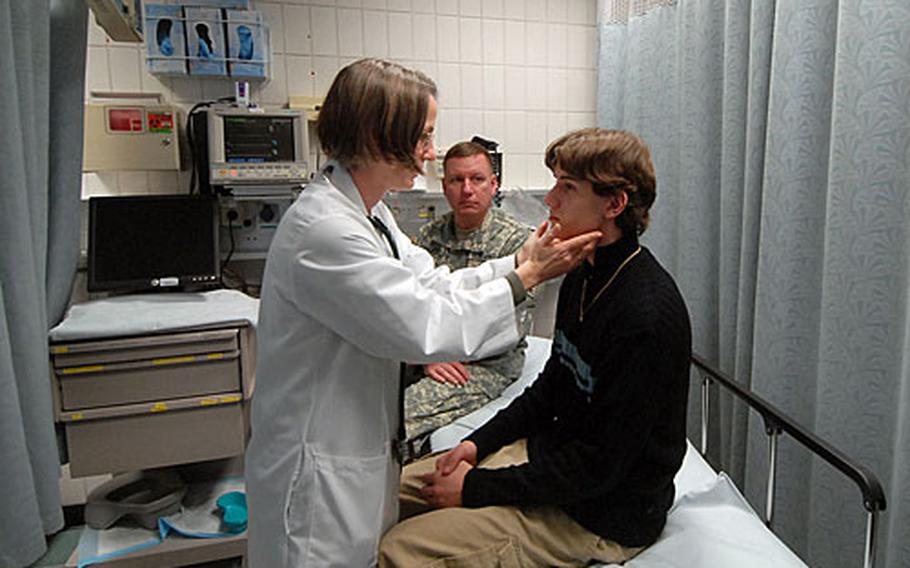 The decision to turn the 63-bed hospital &#8212; where Gen. George S. Patton died in 1945 and, since then, thousands of Americans have been born &#8212; into a health care clinic by this summer came earlier this month.

That&#8217;s when Europe Regional Medical Command officials decided the number of patients needing inpatient and maternity care was declining so much as U.S. military installations closed and units returned to the U.S. that the hospital had become an unaffordable luxury.

&#8220;When you look at meeting the needs of the patients, meeting the needs of transformation, of the Army Medical Department and the U.S. Army, it makes more sense to realign those assets to locations where they&#8217;re more critically needed,&#8221; said Col. Kyle Campbell, hospital commander.

Starting in late June, pregnant women will gradually be referred to German hospitals.

Campbell said that in the last year an average of 36 babies a month were delivered at the hospital and 31 a month by Americans in local German hospitals.

He said the number of deliveries by American women was expected to decline further, to about 25 a month this summer, and later to no more than 18 a month.

There is no change for women with high-risk pregnancies; for years, they&#8217;ve all been referred to local German hospitals because Heidelberg hospital had no newborn intensive care unit, said Lt. Col. John Garr, deputy commander for clinical services.

The hospital&#8217;s emergency room stopped taking emergency cases Jan. 15, and the ER has become an acute care clinic that sees people with illnesses or injuries that are not life-threatening.

Less than 1 percent of those who had visited the ER in the past 18 months had a life-threatening illness or injury, Campbell and Garr said. Those who did were transferred to German hospitals because the Army hospital lacks an adult intensive care unit and a variety of sophisticated equipment.

The closing of the medical inpatient ward is not expected to affect many people. Typically these days, Campbell said, there are just three such patients on any given day, along with four patients in the mother-baby unit.

The hospital is expected to be a health center and will continue to offer outpatient surgery, acute care, family practice services, optometry and appointments for routine health promotion, disease prevention and health maintenance, according to an ERMC press release.

Campbell said that, in Heidelberg, the closure is mitigated by the superlative care local facilities provide.

Depending on the case and the caseload at the Landstuhl hospital, some Heidelberg patients could also be referred there, Campbell said.

He said he and his staff were working to ensure the transition goes as smoothly as possible. Hospital officials have been making visits to German facilities, notifying German ambulance companies and looking at ways to transition staffers from positions that are going away to new positions. The number of patient liaisons, for instance, will have be increased.

He said he expects expectant mothers to be unhappy at first.

Eventually, Campbell said, he expects women will prefer to deliver in a German hospital.

Likewise, he said, although there have been serious plans to close the hospital for some time, it&#8217;s not easy for the staff, either.

Heidelberg&#8217;s U.S. military hospital will shut down this summer, doing away with obstetric and inpatient care. The facility will become a health clinic. Here are some key dates in the hospital closure process.

June 1: Surgical patients who need to stay in the hospital overnight or longer will have to get their surgery in German hospitals after this date.June 30: Pregnant women due to deliver by this date and currently getting prenatal care at the hospital will be the last group able to deliver at the hospital and continue with their same provider.July 15: Any baby past his or her June 30 due date can still be delivered at the hospital through July 15.July 1: Women with this due date and beyond will have to transfer to German doctors and deliver their babies in German hospitals.Emergency care: Anyone who needs emergency care should continue to call 117 or 19222 in the Heidelberg community to get an ambulance.