Heidelberg H.S. students practice in court what they learned in ‘Street Law’ class 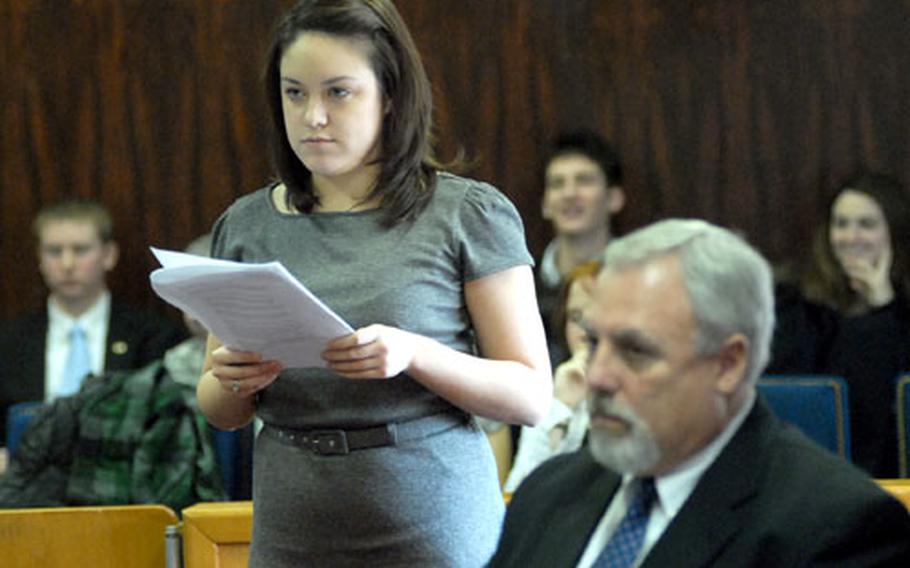 "Defense lawyer" Ashley Spratley listens to testimony at a mock trial. At right in the foreground is Jerry Hatch, who teaches the class. (Michael Abrams / S&S) 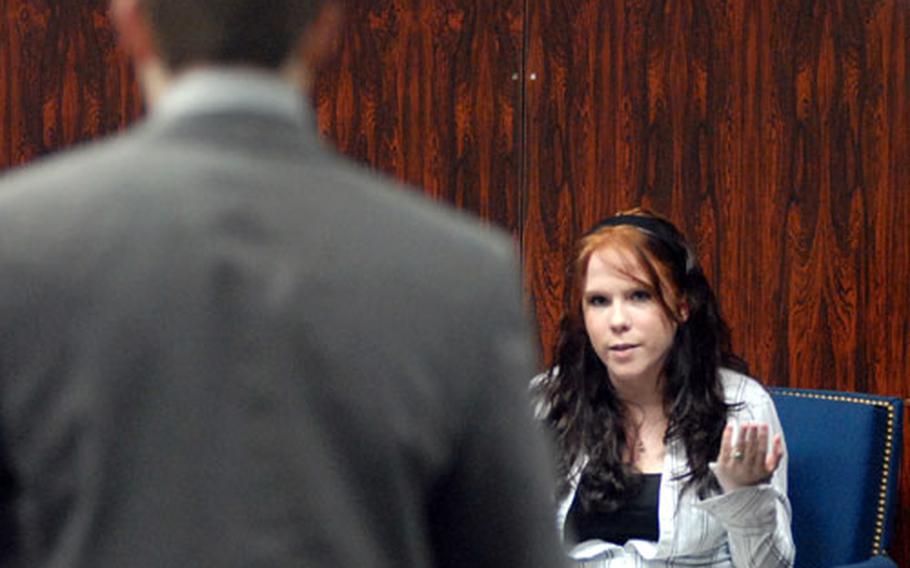 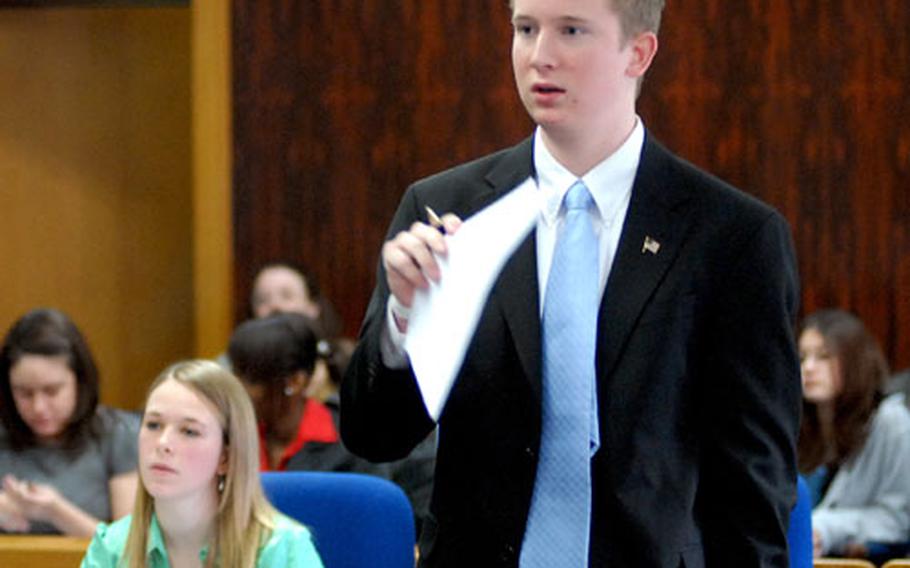 HEIDELBERG, Germany &#8212; The victim in the rape case was a teenage girl, the defendant, a teenage boy.

But then, the prosecutors were teenagers, too. So were the defense lawyers, the witnesses, and all but one of the jurors in U.S. v. David Jones.

It was a mock trial, held Tuesday morning at the garrison&#8217;s courtroom on Patton Barracks as the culmination of a law class at Heidelberg High School.

According to prosecutors, the young woman had said no to her boyfriend&#8217;s request for sex and he&#8217;d forced her to anyway.

&#8220;We are here because of a cry for protection. Will you hear it?&#8221; Kendrick Ladd, one of several prosecutors asked the jurors in his opening statement.

But the defense told jurors that the young woman had lied &#8212; she had consensual sex with her boyfriend then brought rape accusations against him because she was, as attorney Daphne Vessiropoulos said in closing arguments, &#8220;a jealous woman scorned.&#8221;

Presiding in the courtroom was the judge, Lt. Col. Brad Huestis, a military judge and now chief of claims services for the garrison. Also present was Jerry Hatch, teacher of the &#8220;Street Law&#8221; class and a former military lawyer and judge.

The name &#8220;Street Law&#8221; is unfortunate, Hatch said, for a sober, straightforward class on criminal law and procedures. The name comes from the company that markets the class materials, programs and textbook.

Hatch has taught the class for several years and said it helps students learn not only about the law but also about problem-solving, strategy and their responsibilities as citizens.

Although the mock trial did not go into the detailed, anatomical specificity required in real rape trials, the lawyers did not shy away from the facts in a not atypical &#8220;date-rape&#8221; scenario as they built their case.

Why, a prosecutor asked the defendant, had he put a condom on in the bathroom on the night in question if he wasn&#8217;t set on having sex? And wasn&#8217;t it true, he asked, that in order to put on a condom, a man must have an erection?

&#8220;You&#8217;d reached arousal. Is that the point of no return?&#8221; prosecutor Romonno Washington asked in his fast-paced cross-examination of the defendant that turned out to be pivotal in the case.

In real life, date rape cases are difficult to prosecute because there are no witnesses other than the accuser and defendant, and often little evidence.

So it was with the mock trial.

The prosecution had the accuser; her silk shirt, torn, prosecutors said, during the defendant&#8217;s attack; one faint bruise; and an expert witness who said, in her opinion, the accuser was indeed suffering from Rape Trauma Syndrome.

The defense had the accuser&#8217;s diary, which conflicted with her statement to police about how the shirt had been ripped; their own expert witness who said the defendant seemed like a great guy to him; a theory about the accuser&#8217;s jealousy; and the fact that the couple had had consensual sex before.

The defense also had a presumption of innocence and what appeared to be reasonable doubt.

After the jury returned from its 10 minutes of allotted deliberation time, Huestis asked, &#8220;Have you reached a verdict?&#8221;

&#8220;We decided he was guilty because when he was on the witness stand he said he pulled her back [after she got out of bed],&#8221; Brodie said, as the applause from the courtroom subsided.