Heidelberg father trying to sort out blame for son’s death 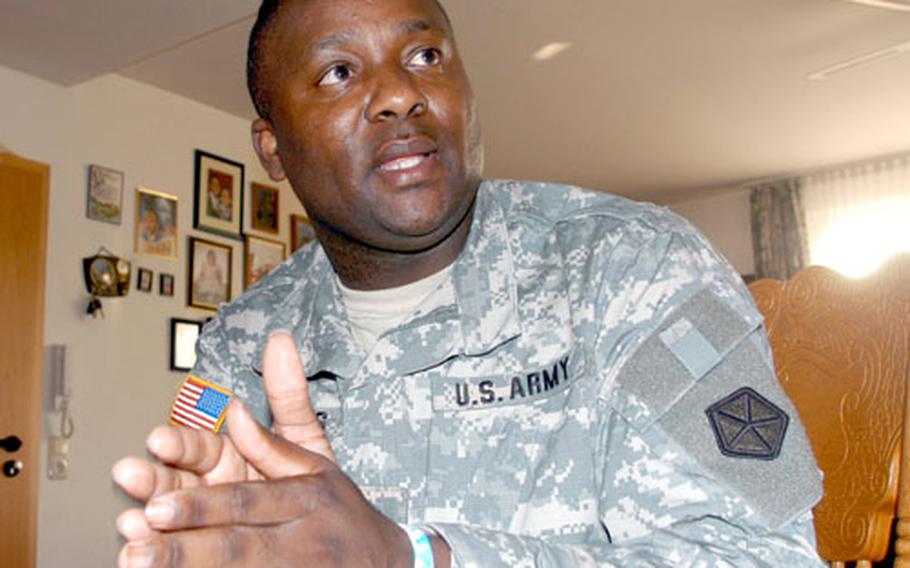 Army Chief Warrant Officer 3 James Long explains some of the legal papers and correspondences he has received since the death six months ago of his 12-year-old son, Maurice. His son died after a parade accident in Heidelberg, Germany. (Charlie Coon / S&S)

Army Chief Warrant Officer 3 James Long explains some of the legal papers and correspondences he has received since the death six months ago of his 12-year-old son, Maurice. His son died after a parade accident in Heidelberg, Germany. (Charlie Coon / S&S) 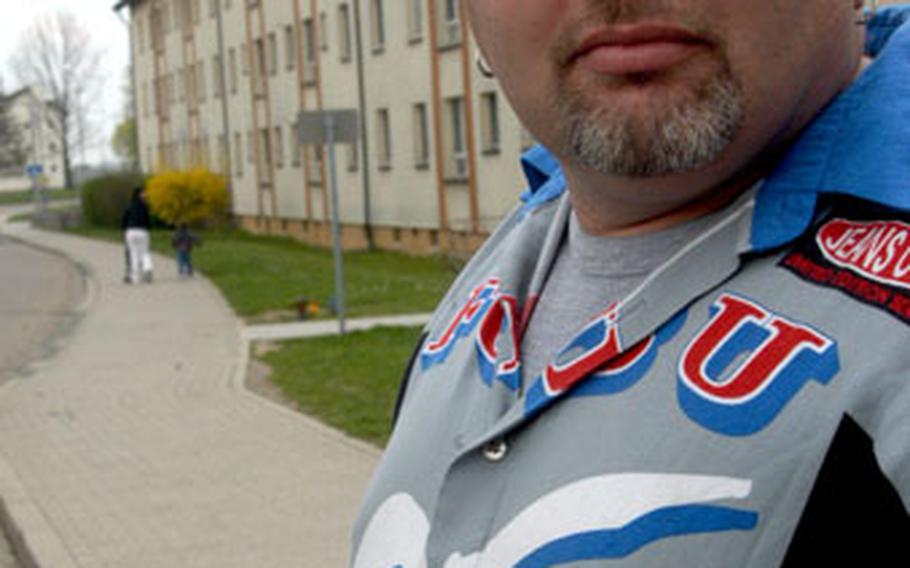 Richard Keesee stands near the spot where 12-year-old Maurice Long died six months ago during a school homecoming parade at Patrick Henry Village in Heidelberg, Germany. Keesee faces up to five years in prison for driving the truck in the parade that was towing Maurice Long. (Charlie Coon / S&S)

HEIDELBERG, Germany &#8212; For six months, James Long and Richard Keesee lived a few blocks apart, but didn&#8217;t know each other.

Then, on the night of Oct. 19, their lives became connected in a way neither could have imagined when a 12-year-old boy died in the street.

Long wants someone to stand up and take responsibility. He acknowledged that Maurice, who suffered a fatal head injury, was not wearing a helmet while on his scooter. But, Long asked, where were the military police? Where was an ambulance? Who was running the show?

Richard Keesee is well known in the community as a mechanic and volunteer softball coach. He was driving his truck in the parade and allegedly caused the boy&#8217;s death. Keesee is charged with negligent homicide and faces up to five years in prison.

&#8220;I believe this was just a horrible accident with a lot of circumstances that played into it,&#8221; Keesee said. &#8220;To get nailed with a negligent homicide charge just bewilders me.

There were no military police securing the parade. The school had asked for MPs to block the road, but there was a &#8220;breakdown in communication,&#8221; according to a letter to Long&#8217;s congressman from Michelle Y. Cromwell of the Department of Army&#8217;s Special Actions Branch, Congressional Inquiry Division.

Keesee said he saw a few MPs at the start of the parade, but never again throughout the slow one-mile lap around the residential area.

Who&#8217;s in charge?Geanna Torres, a civilian who works for 1st Command, was driving out from the commissary that early evening when she noticed the parade coming toward her.

She said she pulled up onto the curb and waited for the parade to pass. Torres&#8217; daughter was in the parade, and the mother wanted to take a few pictures.

Torres said she soon noticed a blue 1978 Ford Bronco. It was piled with kids, some of whom were standing in the truck bed. The driver&#8217;s door was open, and the tailgate was down with youngsters sitting on it.

The heavy spare tire holder, which locks into place with the tailgate up, jutted away from the vehicle.

&#8220;The blue Bronco stuck out absolutely like a sore thumb,&#8221; said Torres, a member of the school&#8217;s Student Advisory Committee. &#8220;I took pictures of all the floats, but took four pictures especially of the Bronco. I wanted to let the parents of the kids who were on this float know that it was not supervised.&#8221;

Keesee, who said he had previously driven in about nine or 10 parades &#8212; in Darmstadt, Mannheim and Heidelberg &#8212; said he was being careful, eyeing the scene left and right, forward and back, idling along with his foot on the brake pedal.

His wife, a U.S. soldier currently deployed to Iraq, was in front of him, driving the family&#8217;s Toyota pickup. The Keesees were carrying ninth- and 10th-graders who were members of the homecoming court.

Maurice Long had already darted out the door of his family&#8217;s apartment to go watch. He&#8217;d left his helmet hanging on his bedroom wall, James Long said, since he wasn&#8217;t going to be riding his bicycle.

A little later, Maurice met up with a friend who had two foot-propelled scooters, and away they went, according to James Long.

He held onto the right side of the truck bed while being towed. Keesee said he didn&#8217;t know the boy was there. According to the autopsy, the Bronco swerved leftward to pass a parked car, probably causing Maurice Long to lose his balance, and while falling the boy apparently was struck in the backside by the spare-tire holder.

The boy then fell forward and struck the curb with the right side of his forehead, James Long said.

His parents arrived on the scene, first his mother and then his father, about the time that the German ambulance and doctor arrived. About 40 minutes after the incident, Maurice was pronounced dead.

About 50 yards away, Richard Keesee stood by waiting and watching.

Paths cross againKeesee said he met James Long for the first time some days later. Keesee works as a car salvager, buying used cars and junking them or fixing them up.

A man came to him one day to sell his vehicle. Keesee noticed the name on the registration, and said his heart stopped.

Keesee, on his lawyer&#8217;s advice, has not approached the Long family. James Long wonders why Keesee hasn&#8217;t come over to his home and mourned with the Long family, and does not sympathize with Keesee&#8217;s plight. &#8220;I believe he acted like a child that night,&#8221; Long said.

A Heidelberg city judge recently gave Keesee a temporary reprieve by deciding not to take the case to trial. But under German law, James Long or the German prosecutor could appeal to a higher court for prosecution. That decision hasn&#8217;t been made.

Either way, James Long seems determined to make someone take responsibility, even if that means suing the Army, the Heidelberg garrison or the school.

Still part of familySix months later, the Long family&#8217;s neat apartment is, in parts, like a shrine to their late son.

Inside the front door is a small table with a Bible on it, with photos of Maurice on the holy book. Across the living room is a large photo of Maurice, taken by his dentist the morning he died, a candle burning next to it. The boy was to be fitted with braces.

Maurice&#8217;s bedroom remains as it was &#8212; a closet full of basketball jerseys, and posters on the wall of athletes such as Steve McNair, Yao Ming and Kevin Garnett, and singers such as Beyonc&#233;.

In the next bedroom over, a jersey of Maurice&#8217;s favorite player, Allen Iverson, hangs over the bed of his 16-year-old brother, James III. His 5-year-old sister, Anna, still asks about her brother.

When people see him on the street or at the commissary, Long said, they sometimes avoid him, not knowing what to say.

Keesee said he garaged his Bronco for three months after the incident to give the community time to heal. Meanwhile, he wonders what his future holds. Legal bills are piling up, and he wonders if the school or Army will pay them.

Keesee, his wife and their two teenage daughters have lived at Patrick Henry Village for seven years. Two stop-loss orders have kept his wife there.

While Keesee leans against his Bronco, his cell phone rings. A woman wants to junk her old car that won&#8217;t start. Keesee suggests first trying a new battery. A few kids walk by and wave.

Even if Keesee goes to jail, and even if the Long family is awarded a lot of money in a lawsuit, James Long said it would ultimately be of no consolation.

HEIDELBERG, Germany &#8212; The school and garrison involved in the Oct. 19 homecoming parade in which a 12-year-old boy was killed are both deflecting blame in the death.

Maurice Long was on a foot-propelled scooter when he hitched a tow on a parade vehicle crowded with riders. He fell and died when his forehead struck a curb.

Requests for police support were hand-delivered by a Heidelberg High School assistant principal &#8212; once about three weeks prior to the parade and again the day before, according to Dennis Bohannan, a spokesman for Department of Defense Dependent Schools-Europe.

&#8220;Unfortunately, military traffic and crowd control was not in place before the parade was allowed to begin,&#8221; Bohannon said in an e-mailed response to Stars and Stripes.

A miscommunication between the school and Army Garrison Heidelberg resulted in the police not showing up, Michelle Y. Cromwell of the Department of Army&#8217;s Special Actions Branch, Congressional Inquiry Division, said in a letter to Long&#8217;s congressman.

&#8220;However,&#8221; Cromwell wrote, &#8220;control of the parade and the conduct of its participants would have remained the responsibility of the sponsoring organization,&#8221; that is, the school.

Joseph Tafoya, director of the Department of Defense Education Activity, responded in his own letter to the congressman, Rep. Edward Whitfield of Kentucky.

&#8220;It is my understanding that the [garrison] will explain why traffic control support was not provided,&#8221; Tafoya wrote.

Kim Walz, a spokeswoman for Installation Management Agency Europe, which operates the garrison, wrote in an e-mailed response to the media that even if MPs were on site, they &#8220;would not have prevented the accident, as the MPs would not have been in the area where the accident occurred.

Walz added that the community has taken measures to make future events safer. Police were on patrol at Patrick Henry Village for a Dec. 10 Christmas parade there.