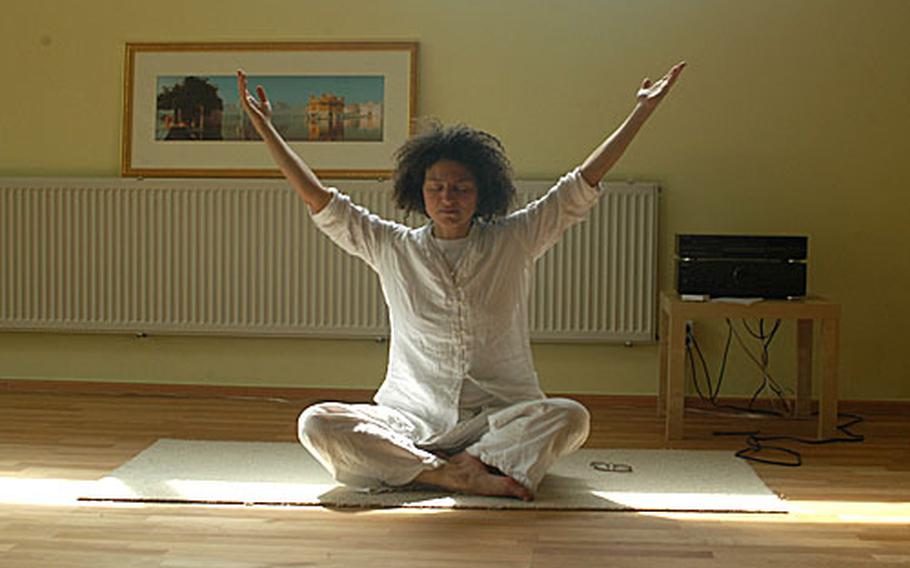 Guru Deva Kaur, also known as Annette Wallmeyr, executes a classic yoga pose at the Naad Yoga Center near Campbell Barracks. Wallmeyr says yoga is a proven technique to refresh body, mind and spirit and is "where all traditions have room to be." (Nancy Montgomery / S&S)

Guru Deva Kaur, also known as Annette Wallmeyr, executes a classic yoga pose at the Naad Yoga Center near Campbell Barracks. Wallmeyr says yoga is a proven technique to refresh body, mind and spirit and is "where all traditions have room to be." (Nancy Montgomery / S&S) 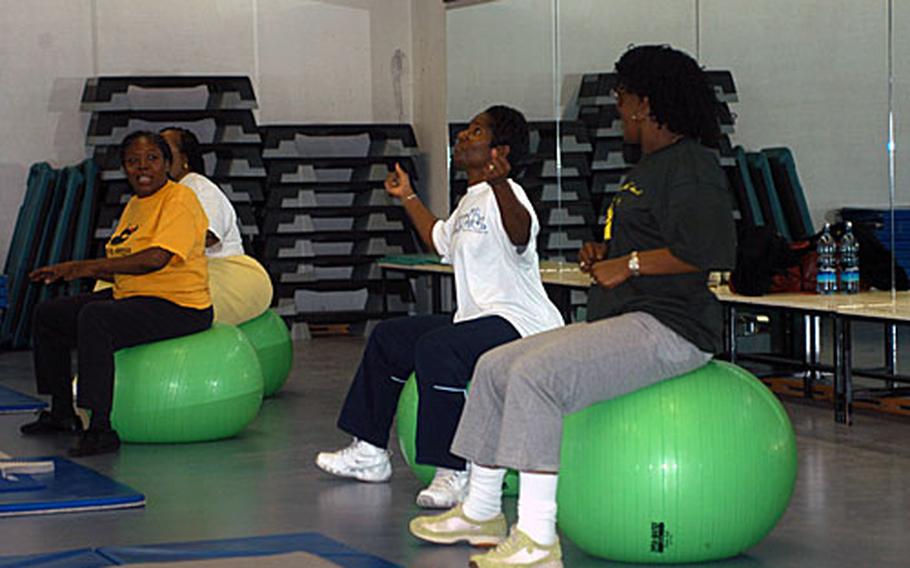 Natalie Hannans, third from left, warms up with her "PraiseMoves" exercise class which is offered at Heidelberg U.S. Army gyms and is based on yoga positions and Biblical quotes. (Nancy Montgomery / S&S) 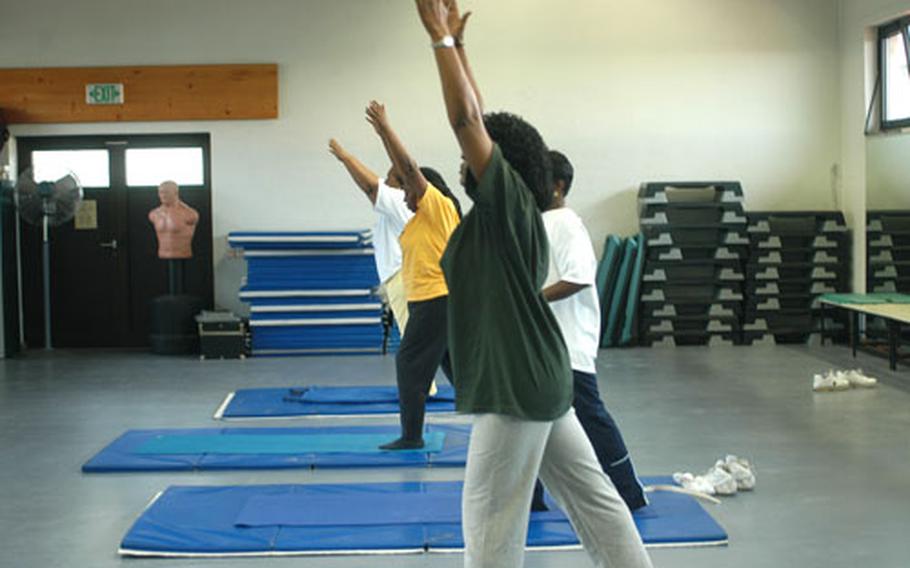 HEIDELBERG, Germany &#8212; Since January, the gym at Campbell Barracks has been the scene of a religious skirmish of sorts, with dueling poses &#8212; and mantras versus psalms.

In the Vinyasa yoga class, members breathe a certain way and try to move smoothly through poses with names like the &#8220;Sun Salutation.&#8221;

Willis is backed by some conservative Christian theologians. And 18 years ago, Pope Benedict XVI, who was then Cardinal Joseph Ratzinger, wrote in a letter to his bishops that if good feelings from such exercise were confused with &#8220;authentic consolations of the Holy Spirit,&#8221; that might result in &#8220;psychic disturbance and, at times, to moral deviations.&#8221;

Natalie Hannans, Heidelberg&#8217;s PraiseMoves instructor &#8212; a friendly, energetic 46-year-old former soldier and military wife who started teaching the classes in January &#8212; says she has nothing bad to say about yoga or whether it&#8217;s compatible with Christianity. What she&#8217;s interested in, she said, is providing an experience that helps people feel healthy, strong and relaxed, partially through quoting Bible verses.

According to Willis, who charges about $16 for an exercise video and some $300 for PraiseMoves instructor certification, instructors are conducting a &#8220;fitness ministry&#8221; and a sort of evangelism. &#8220;Friendship Evangelism in the form of inviting an unsaved friend or neighbor to a fun &#8216;alternative to yoga&#8217; class is a wonderful way to introduce them to fellowship with believers,&#8221; Willis writes on her website. &#8220;They&#8217;ll hear the Gospel in a relaxed atmosphere. I believe many will be won to the Lord.&#8221;

A recent class at Patrick Henry Village had three women who had already been won. They sang along to the music, did the poses as best they could and recited their Bible verses.

PraiseMoves uses many of the same poses as yoga but calls them different names, and, like yoga, focuses on stretching, movement and breathing to improve flexibility, strength and balance.

Kaur, who also is known as Annette Wallmeyr, said she was familiar with the argument that yoga, because it&#8217;s part of the Hindu tradition, is actually a religion and should be avoided by Christians. She disagrees, however, noting her own Catholic background and the fact that the center has Christian yoga teachers. &#8220;It&#8217;s a way of living. It&#8217;s not a religion,&#8221; she said, &#8220;It&#8217;s a technique, an ancient one, a proven one. We just feel it has so much to offer the people of the west.&#8221;