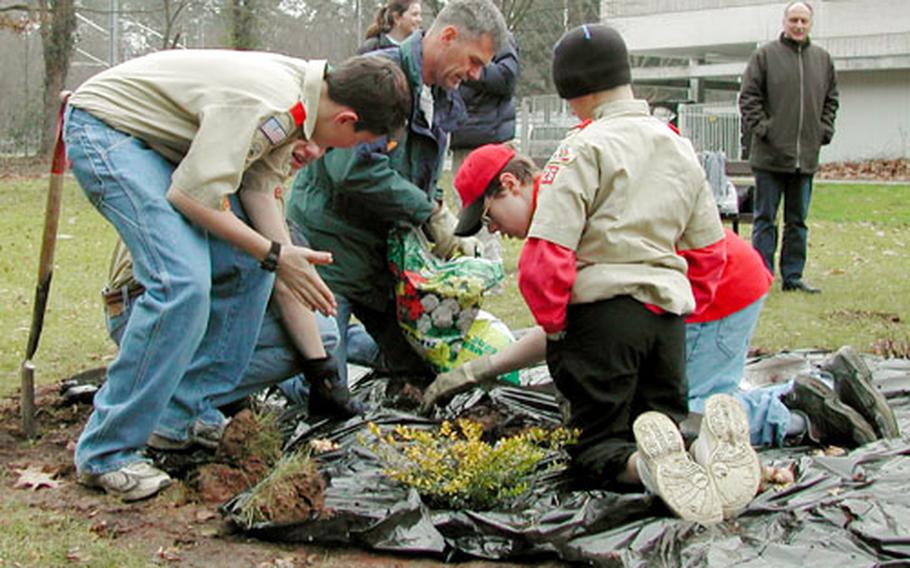 Troop 26 Boy Scouts help Christopher Guyer with his Eagle Scout project this week at the Europaische School in Karslruhe. (Courtesy to S&S)

The problem is not unique to Heidelberg, according to Boy Scout officials in Europe.

In the case of Troop 26, scoutmaster Jeff Slaker moved in April after 18 months leading the troop.

Scout father Jim Guyer, 47, stepped in to help despite his busy schedule as a physician in Mannheim. Unfortunately, the former Eagle Scout deployed stateside with the Air Force Reserve. Now, Guyer and his family are heading home to Montana.

Another volunteer, Stew Sauders, came in August, but he is also ready to rotate stateside, Guyer said.

In early December, the troop ran an advertisement in the local military newspaper, seeking volunteers. By this week, no one had responded.

In a &#8220;worst-case&#8221; scenario, Troop 26 would not reapply for a charter with the Boy Scouts of America in January. The remaining Scouts would be placed into one of Heidelberg&#8217;s three other Scout troops.

&#8220;Someone just needs to step up to the plate and become the unit leader,&#8221; said Jack Gaylord, senior executive for the Barbarossa District, which covers much of Germany.

Gaylord, a retired Army major, began working with the Boy Scouts Trans-Atlantic Council in 1995. Since then, only a few troops disbanded for a lack of leaders. Often a troop folds due to military communities drawing down.

On average, Scout troops lose about one-third of their membership and volunteer leaders due to military rotation, Gaylord said.

On Sunday, Guyer&#8217;s son, Christopher, 14, wrapped up his Eagle Scout project &#8212; creating an outdoor meeting place for students at the Europaische School in Karslruhe, the international high school the teen attends.

At first, Gaylord looks to Scout parents, then to the community for volunteers, he said. Single soldiers who meet the criteria also could lead a troop.

More information can be found at the council&#8217;s Web site: www.tac-bsa.org.