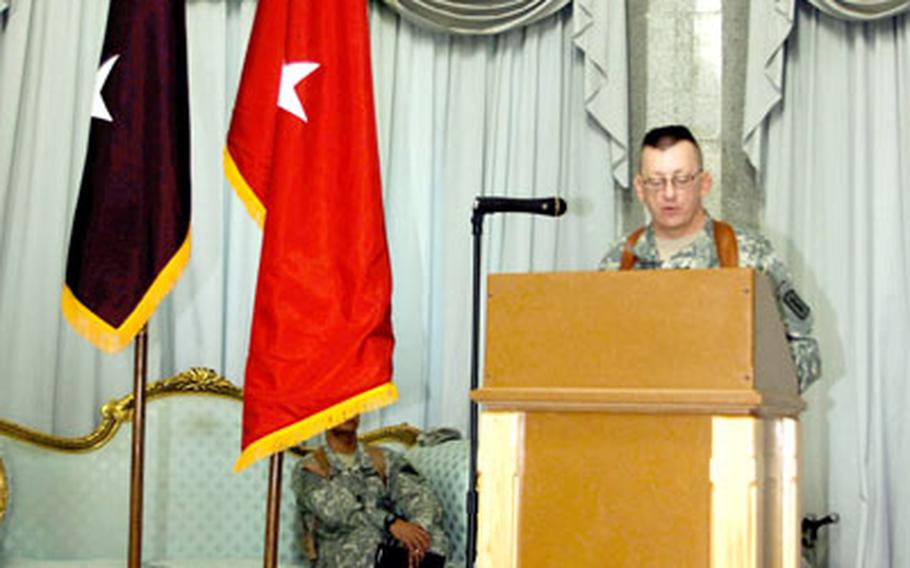 BAGHDAD &#8212; The Heidelberg, Germany-based 30th Medical Brigade is making its way home after turning over command of all U.S. military medical services in Iraq in a ceremony at the Al Faw Palace in Baghdad on Thursday, officials said Friday.

&#8220;Our mission was to provide compassion and humanity in war, while preserving the fighting strength of our multi-national forces, and that is exactly what we did, to the absolute highest of standards,&#8221; Col. Steven W. Swann, commander of the 30th Medical Brigade, said during the ceremony, according to an Army news release.

The brigade deployed from Germany in October 2005 and now begins the weekslong process of returning to its home base. The mission was the brigade&#8217;s second deployment to Baghdad.

Members of the 3rd Medical Command began arriving in Iraq in late August.

&#8220;The 30th Medical Brigade, like the units before them, set very high standards, and we are proud to follow in those footsteps,&#8221; Maj. Gen. Ronald D. Silverman, commander of the 3rd Medical Command, was quoted as saying. &#8220;I&#8217;m confident that 3rd MEDCOM will continue the trend by becoming a model for other teams to learn from.&#8221;

According to V Corps officials, the brigade deployed with some 122 members of the headquarters company, along with some 200 troops of the 226th Medical Logistics Battalion, from Miesau, Germany.

On a September morning last year, as the brigade held its farewell ceremony, Swann told the crowd: &#8220;Our mission is simple. We are deploying to provide the absolute highest level of medical care to American sons and daughters and coalition forces that are wounded or sick on the battlefields of Iraq.&#8221;